ExpressVPN vs CyberGhost VPN 2021 – Which VPN Should You Pick? Let’s Clear Up Any Doubts! 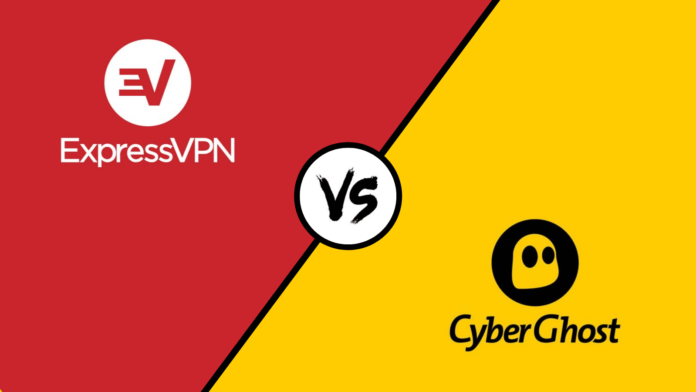 In case you’ve seen our article on the best VPNs available right now, you know that ExpressVPN and CyberGhost VPN lead when it comes to today’s most capable VPN services. In fact, we’re sure that you’ll have a very hard time choosing between these the two, which is the reason why we've published this guide.

By checking various aspects of each of these VPNs and comparing those aspects directly, you’ll see many subtleties that will tell you which one you need to use. So, without further ado, welcome to our ExpressVPN vs CyberGhost VPN comparison!

Before we start, here are a few words on what to expect from these VPNs. As our ExpressVPN review will tell you, this option provides a solution to your every problem. It protects your data in the best way possible, lets you access restricted websites, and plenty more.

However, the same could be said for its direct competitor. Our CyberGhost VPN review tells you that aside from some minor drawbacks, this can also be a perfect VPN solution. This only tells us that we need to go in-depth when comparing these two VPNs.

We’ll begin our ExpressVPN vs CyberGhost VPN comparison by providing two tables. First, let’s compare some of the most vital features of these VPN services.

The following table lists individual scores of various aspects of these two VPNs – based on their respective reviews. With that said, you can use it to check both the strongest and weakest points of ExpressVPN and CyberGhost VPN.

And finally, it’s time to dive deep into our ExpressVPN vs CyberGhost VPN comparison. Make sure to stick with us until the end of this article, and you'll get to learn all there's to know!

ExpressVPN vs CyberGhost VPN (2021) – Which Of These VPNs Is Better?

You already know this is going to be an intense battle. Both of these are considered to be the best of what today’s VPNs offer. So, let’s dive into our ExpressVPN vs CyberGhost VPN comparison.

The first category of this ExpressVPN vs CyberGhost VPN comparison is related to these VPNs’ background checks. Let’s see where they come from, under whose jurisdiction they operate, and what all that means for their users.

Winner: It’s hard to pick a winner of our first category – as you won’t make a mistake no matter which of these VPNs you pick. However, we have to note that ExpressVPN takes the lead here due to its (privacy-friendly) country of origin.

Do you want to use a VPN on your computer? Or maybe you want it on your phone, media streaming device, or even on a router? That’s why it’s important to know which platforms (and how many) are covered by a single subscription.

Winner: Due to the fact that CyberGhost VPN allows 7 simultaneous connections, it becomes the winner of this category. Both of these offer native apps across the board, though.

Next, our ExpressVPN vs CyberGhost VPN comparison will tell you about the process of installation of these VPNs. Ideally, you’ll want a VPN that can be installed even by complete newbies, without any unwanted distractions.

Winner: Both ExpressVPN and CyberGhost VPN come with similar installation methods – equally simple and user-friendly. Therefore, when it comes to this category, we’ll call it a tie.

You already know that both of these are incredibly powerful VPN solutions. So, let’s take a closer look at their features and see what sets these VPNs apart from the rest.

Winner: Even the most advanced users are going to love these two (incredibly powerful) VPN services. Still, CyberGhost VPN comes out on top here as it comes with certain features that its competitor doesn't offer (such as ad-blocking and dedicated IPs, for example).

Before you reach the final decision, it’s important to know how many servers you’ll get to use. Therefore, we’ll tell you about the size of these VPNs’ server networks and their reach.

Winner: It’s true that ExpressVPN should meet the needs of even the most demanding users. However, CyberGhost VPN comes first here since it doubles the number of servers that its competitor offers - and so, wins this round of our ExpressVPN vs CyberGhost VPN comparison.

We are sure that you want a user-friendly VPN application. Still, you don’t want anything overly limiting. Instead, your chosen VPN needs to be flexible enough to offer an easy-to-understand interface, without hindering the functionality of its service.

Winner: Once again, it’s very hard to pick a winner between these two. Even though they bring different types of interfaces, both of these are suitable for an incredibly wide range of users. Still, if you have no experience with VPNs, you won't make a mistake if you pick ExpressVPN - as this truly is the most visually polished VPN right now.

We understand that for many of you, media streaming is crucial when looking at VPNs. That’s why we believe this segment to be one of the most important parts of our ExpressVPN vs CyberGhost VPN comparison. Here's what you need to know.

Winner: Both of these are among the best of what today’s VPNs offer – in terms of media streaming and P2P. No matter if you pick ExpressVPN or CyberGhost VPN, you'll get to access any streaming platform (even in unsupported countries) and download torrents without limitations.

We shouldn’t forget about the primary role of VPN services. These are made to keep you secure online by using various types of VPN protocols and encryption. Here’s what you need to know about ExpressVPN and CyberGhost VPN.

Winner: No matter if you decide to use ExpressVPN or CyberGhost VPN, you can be sure that your private data won’t get into the wrong hands. These are among the most powerful VPNs available in 2021, especially when it comes to their privacy-protecting features.

Interestingly enough, we finally come to a segment of our ExpressVPN vs CyberGhost VPN comparison where it’s easy to pick a winner. Keep on reading to learn more.

Winner: ExpressVPN is one of the fastest VPNs around, and we’re completely sure that you’re going to be happy with its performance. When compared to CyberGhost VPN, we can see a drastic difference, especially in long-distance connections. Therefore, ExpressVPN wins this round easily.

VPNs are powered by high-end technologies and these are highly technical solutions. Therefore, something can occasionally go wrong – and this is why you’ll need a VPN with reliable customer support.

Winner: No matter which of these two VPNs you pick, you can count on having a team of customer support agents waiting for your questions. With that said, there's no clear winner of this ExpressVPN vs CyberGhost VPN comparison category.

Finally, let’s see how much you need to spend on these VPNs. And also, we’ll tell you which of these brings better value for its price.

Winner: Overall, CyberGhost VPN will most certainly appeal to a broader range of users. It's more affordable than its competitor, especially if you purchase a long-term subscription. However, if you truly want the best, you need to be prepared to pay for it - and that's why ExpressVPN is still the ultimate choice.

ExpressVPN vs CyberGhost VPN – So, Which of These VPN Should You Pick?

So, after everything said and done, the big question remains – which of these is better? In all honesty, you’ll be perfectly happy with both of these. They truly are the best VPNs right now in many aspects, but let’s admit it – there can only be one winner. And we don’t have a single doubt here – you should pick ExpressVPN.

Even though its competitor comes with more servers and even a couple of unique features, ExpressVPN comes with unparalleled performance. It protects your data in truly the best and the most secure way possible, unblocks websites, and makes you 100% anonymous online.

And it’s doing all of that in style, as it comes with brilliantly designed applications that are available on many platforms and devices. So, go ahead and check out ExpressVPN.

This is where we conclude our ExpressVPN vs CyberGhost VPN comparison. If you have any doubts or questions, know that you can count on us. So, don't forget to post your comment below. And of course, thanks for reading!