ExpressVPN Aircove: What Is it & How Does It Work? 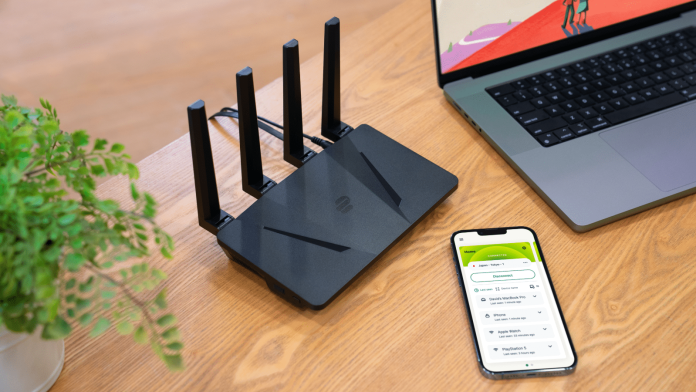 ExpressVPN Aircove is a brand-new product unveiled in September 2022, created by the team of cybersecurity experts behind one of the world’s most popular VPN services - ExpressVPN. It’s a router that supports the latest networking technologies, built from the ground up to allow easy VPN connectivity.

In this guide, we’ll explain what ExpressVPN Aircove is, how it works, what you can expect from it, and more. So, if you’re looking for a way to quickly and easily protect your entire household at once, you’ll want to read this article carefully.

What Is ExpressVPN Aircove?

ExpressVPN Aircove is a home router, which means that it handles your incoming and outgoing traffic like a typical router. However, it’s also designed to connect to ExpressVPN’s servers directly, allowing you to unblock websites and protect your privacy.

That means Aircove works best once you subscribe to ExpressVPN. Without a subscription, Aircove will work like any other router – without connecting to VPN servers. Of course, this hardware product is designed for ExpressVPN users, letting you connect to 5 VPN locations simultaneously.

Also, know that Aircove is an ultra-fast router. It’s powered by dual-band Wi-Fi 6, delivering up to 1,200 Mbps of fast and stable Wi-Fi. It also provides up to 1,600 square feet of whole-home coverage, supporting all your Web-connected devices at once.

ExpressVPN Aircove is priced at $189.90 (you can buy it via Amazon). Currently, it’s available to customers in the United States only.

ExpressVPN Aircove is a powerful VPN-ready router equipped with high-end specifications. It supports up to 600 Mbps on 2.4Ghz Wi-Fi and up to 1,200 Mbps on 5Ghz Wi-Fi. So, even if you have an ultra-fast Web connection, Aircove will be able to support your online activities.

If you’d like to check Aircove’s technical specifications in-depth, check out the following table. You’ll learn more about its processor, RAM, storage, Wi-Fi speed, and more.

How Does ExpressVPN Aircove Work?

ExpressVPN Aircove works by letting you connect your Web-connected devices to 5 VPN locations at once. That means you can create up to 5 Device Groups (more on that later) and then pick a VPN server location for each of those groups.

So, if you want to route your TV’s and gaming console’s traffic through a UK server while setting your phone and tablet to route through a US server, you can do that. As said above, the only limitation is that you can connect to 5 VPN locations.

Also, please note that ExpressVPN Aircove doesn’t provide you with Internet access on its own. That means you need an ISP (Internet Service Provider) to connect to the Web. Your ISP gives your home access to the Web, while Aircove distributes that access to your connected devices.

Wi-Fi 6 is the latest iteration of the Wi-Fi protocol, also known as “IEEE 802.11ax.” This tech is used by high-end routers such as ExpressVPN Aircove to bring ultra-fast Internet speeds, more stable connections, and reduced latency. Here's more information:

In essence, by being a Wi-Fi 6 router, ExpressVPN Aircove has made sure to support the latest technologies to become a future-proof device. If you decide to purchase it, you can be sure that ExpressVPN Aircove will serve you for years.

What Are Device Groups?

For example, ExpressVPN Aircove allows you to connect your TV and your streaming device to a UK-based location to stream the latest football matches. Then, it can connect your game console to a nearby server, giving you lower latency. And, you can set your tablet to connect to a server in a country with a huge Netflix library.

With the “Device Groups” feature set, ExpressVPN Aircove will do all the heavy lifting in the background. That said, let’s see how to use it.

How to Use Device Groups?

Getting started with Device Groups on ExpressVPN’s VPN router is quite easy. Here are the steps you need to take:

1. Complete the initial setup of your Aircove router.

3. You will now see your Device Groups on your home screen. You can also create a new Group on the right (ExpressVPN will recommend some often-used groups).

4. Select a VPN server location for each Device Group (you can browse the available servers at the top, just under the group’s name).

5. Drag and drop your connected devices between groups. That’s it!

More precisely, ExpressVPN’s firmware was audited by Cure53 in June and July of 2022. As per the reports of that audit, there were no findings indicating that ExpressVPN Aircove collects or endangers your sensitive information in any way or manner.

We’ll also note that the results of Cure53’s audit of ExpressVPN Aircove are made public (click the provided link to read them). Unlike most other routers, Aircove employs a slate of technologies and features that prevent digital tracking, ensuring your privacy on the Web.

We have to say that ExpressVPN continues to impress by going through a rapid evolution. Based on our preliminary findings, buying ExpressVPN’s Aircove router is a decision you won’t regret. Of course, subscribe to ExpressVPN first, as you’ll need an active subscription.

Of course, you can also pick another route. That said, here are the best VPN routers if you’re willing to keep your options wide open. Also, these are the best VPN services, so you can pick any of those and configure them manually (on a non-Aircove router, though).

Where Is ExpressVPN Aircove Available?

ExpressVPN Aircove is currently available in the United States only. You can purchase the newly launched router on Amazon.

How Much Is ExpressVPN Aircove?

ExpressVPN Aircove is priced at $189.90 (via Amazon). However, you’ll also need a subscription to ExpressVPN, which starts at $6.67/month (for its yearly plan).

At the moment, you can get ExpressVPN for $6.67/month for its yearly plan. Going that route will get your 3 extra months added to your first billing period.

That would be all for your ExpressVPN Aircove guide. If you have any questions, let us know via the comments section below. Thanks for reading!