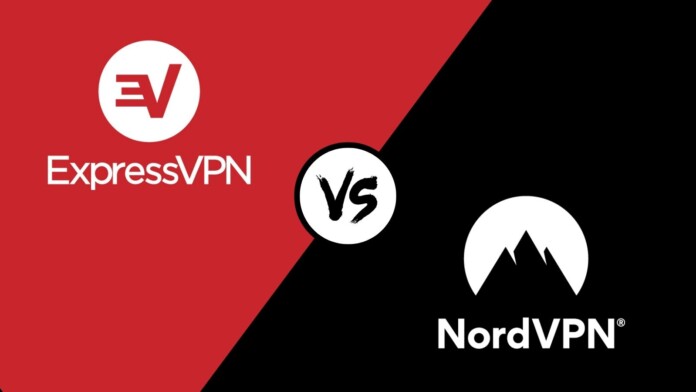 Without much hesitation, it could be said that ExpressVPN and NordVPN are the top dogs of the VPN industry in 2021. Both of them have been around for a long time, they offer great value for the price they ask, as well as plenty of high-end features.

However, this is also what makes it really hard to choose between the two. So, which one is better, and for what types of users? We're going to take a look at what sets the two apart in this ExpressVPN vs NordVPN comparison guide.

When we reviewed ExpressVPN, it was hard to imagine another VPN being able to directly compete with it. This VPN is extremely user-friendly, highly polished, and offers exceptional customer service. Thanks to its broad set of features, it caters equally well to both complete beginners and highly advanced users.

Then, we reviewed NordVPN, and - suddenly - we were torn. NordVPN goes toe-to-toe with ExpressVPN in usability but also offers a wider range of features that help you customize and enhance your VPN experience. It's equal to ExpressVPN in many ways but also tries really hard to build its own identity based on transparency.

Before we get deeper into our ExpressVPN vs NordVPN comparison, here’s a breakdown of the most important highlights of the two VPN services. Take a look at the following table to compare their most prominent features.

Next, take a look at the final scores from our reviews of these two VPN services. By inspecting the following table carefully, you'll manage to see the strongest and the weakest points of both ExpressVPN and NordVPN.

We had no choice but to create the ultimate head-to-head to find out which VPN deserves to sit on the throne. So, keep on reading our ExpressVPN Vs NordVPN comparison.

ExpressVPN vs NordVPN (2021) - Which of These Two VPNs Is Better?

Just like in our reviews of these two VPN giants, we’ll be taking a look at every important aspect of using a VPN service. So, let's jump right in.

When choosing a VPN, you'll want to check its background first. Ideally, you should pick a VPN outside the 14-Eyes Alliance that didn't go through any privacy scandals in the past.

Winner: Overall, both ExpressVPN and NordVPN deserve your trust. However, considering that ExpressVPN comes without any privacy-related incidents in its past (the same can't be said for NordVPN), it's clear that it comes out as the winner in this category.

Depending on how many devices you want to use, you need a VPN service whose apps work on the most popular platforms. Lucky for you, both ExpressVPN and NordVPN offer decent cross-platform compatibility.

Winner: It’s hard to pick a winner in this category since both of these VPNs are present on pretty much any platform. If we really want to nitpick, we’d go with NordVPN since it offers up to six simultaneous connections (while ExpressVPN offers five).

Getting started with a VPN shouldn't be a tiresome process. Instead, it should take only a couple of minutes of your time, which is achieved by offering native apps that come without complicated installation methods. So, here's what ExpressVPN and NordVPN offer.

Winner: Once again, picking a winner is hard. To be honest, our opinion is that both ExpressVPN and NordVPN offer an equally simple installation process. Even complete newbies won’t have a hard time installing these apps and getting started with VPNs.

Our next step in the ExpressVPN vs NordVPN debate takes us to their most important features. And yes, we're talking about privacy-related features, so make sure to pay special attention to this segment.

Winner: Even though both ExpressVPN and NordVPN are hugely capable VPN services, we have to say that NordVPN is the winner of this round. You get a constant stream of new features and even ad-blocking is included.

If you're after Web content unblocking, or if you're concerned about your Web connection's performance, having access to thousands of VPN servers should ease your mind. However, If ExpressVPN or NordVPN don't meet your needs, take a look at our article about VPNs with the highest number of servers.

Winner: Even though it doesn’t have as many servers as NordVPN, ExpressVPN should meet your every need. Having 3,000+ servers is an incredible perk. In addition, ExpressVPN’s servers are present in 90+ countries, which is one of its biggest selling points.

Both ExpressVPN and NordVPN come with user-friendly interfaces, and they cater to almost every type of device under the sun. They both have invested a lot of time and effort into refining their UI and UX to make them as convenient as possible.

Winner: Both of these VPNs are exceptionally user-friendly and they come with modern, uniform interfaces. However, ExpressVPN digs beneath the surface to provide a richer experience overall. In our opinion, this VPN comes out on top.

Aside from protecting your privacy, VPNs also help you unblock media streaming services. On top of that, they let you download torrents anonymously. So, here's how ExpressVPN and NordVPN fulfill those roles.

Winner: It’s clear that ExpressVPN wins this round. It’s the most capable VPN service for media streaming and downloading torrents - and not just when compared to NordVPN.

Besides unblocking content, privacy and security are the second reason why people use VPNs. Well, we're happy to say that your data is safe with both ExpressVPN and NordVPN, as you'll soon find out.

Winner: Both ExpressVPN and NordVPN offer really good security and privacy. They don’t keep logs and have proof to back up their claims, and offer a wide range of features that protect your data. In our opinion, you’re safe with either one of them.

Security and privacy are great but not when they come at the cost of speed. If you’re going to connect to servers on the other side of the world, you will eventually experience slowdowns, but a great VPN will minimize it. To check out other options, here’s our overview of the fastest VPN providers.

Winner: NordVPN takes the lead here - as it comes out slightly faster than ExpressVPN. This is one of the fastest VPN services on the market, offering great performance even with OpenVPN (a really resource-intensive protocol).

We were very impressed by the levels of support these VPNs offer. Whichever one you pick, you’ll get the help you need, in a timely manner.

Winner: Both VPN services provide top-level customer support, and your questions will be answered in a timely manner. ExpressVPN connects you faster through live chat, but NordVPN’s agents are pretty helpful too. It’s basically a tie, but we liked ExpressVPN more because they responded faster via email.

ExpressVPN and NordVPN are considered two of the most expensive VPNs on the market by most people. However, having spent a lot of time with them, we can confidently say they're worth every penny.

Winner: At the moment, NordVPN comes at a cheaper price on it's 2-year plan + get 3 extra free months. However, If you take a look at the value these two VPNs bring, ExpressVPN comes out as the winner in this category (especially if you decide to purchase the one-year subscription, which gets you 3 extra free months).

ExpressVPN vs NordVPN - The Final Verdict! Which One Should You Pick?

ExpressVPN and NordVPN are, in our opinion, the best of the best. You can’t go wrong with whichever choice you make, but there can be only one winner. And for us, that's ExpressVPN.

ExpressVPN has the looks of a champion and delivers the privacy and security that you’d want from a quality VPN service. It’s just as easy to use as NordVPN (newbie-friendly) but also offers deeper functionality for those who want a bit more control over their connection.

And even though NordVPN is more affordable, it doesn’t really offer the same level of service or functionality as ExpressVPN (especially if we take their backgrounds and reputation into consideration). So, go ahead and sign up for ExpressVPN today. You won’t regret it!

With that said, you've reached the end of our ExpressVPN vs NordVPN comparison. In case of any questions of doubts, make sure to post your comment below. Thanks for reading!