ExpressVPN vs. Surfshark VPN (2021) – Which of These VPN Services Gets You More for Your Money? 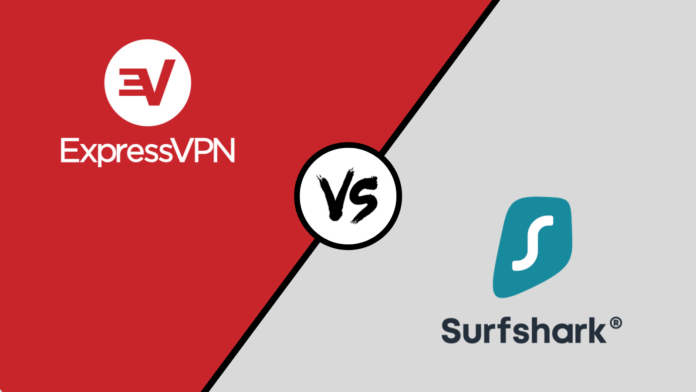 When choosing between different VPNs, how do you compare them? What kinds of features do you prioritize? We bet that you check the age of a VPN you're interested in using. After all, there’s nothing wrong with going for a well-known brand, which minimizes the chances of encountering something 'unusual' later on.

Well, this guide will show you that even a newcomer can challenge long-standing VPN services. With that said, we’d like to welcome you to our ExpressVPN vs. Surfshark VPN comparison!

Before we dive deeper, let’s quickly go over these VPNs. ExpressVPN is among the very best VPNs you’ll find right now, without a single doubt. It comes with an unparalleled set of features and has a reputation for truly caring about its customers. As noted in our ExpressVPN review, you can’t go wrong if you choose this VPN.

Then, we have a newcomer – called Surfshark. Our Surfshark VPN review will tell you that we felt quite impressed by this VPN, especially since it seems to check all the right boxes. In the end, these two VPNs are quite similar, so we’ll need to pay extra attention to their subtleties.

First, let’s start our ExpressVPN vs. Surfshark VPN comparison by listing these VPNs' most prominent features. So, check the table found below.

So, that would be all for our introductory segment. Make sure to keep reading our ExpressVPN vs. Surfshark VPN comparison to learn all there's to know about these two VPNs.

We will compare the VPNs by checking their individual aspects – just like we did when we first reviewed them. This is how you can decide which one to pick, based on your individual needs. So, let's jump right in, shall we?

First and foremost, let’s talk about where these VPNs come from. More precisely, we'll check under whose jurisdiction they operate, which is crucial to know before you subscribe (to any VPN, for that matter).

Winner: It's close to impossible to decide which VPN wins this category. Both of these come from highly reputable brands, after all. However, ExpressVPN's age and numerous proofs of its no-logs policy is something that its rival can’t match (at the moment, at least).

A capable VPN service brings native applications across the board – for all currently popular desktop and mobile platforms. So, let's see what you can expect from Surfshark and ExpressVPN.

Winner: Again, it’s tough to decide which of these two VPNs is better. ExpressVPN is compatible with any device imaginable, while Surfshark VPN allows you to connect as many devices as you want. Therefore, we'll call it a tie - as we strongly believe that no matter which of these VPNs you pick, your needs will be met.

When it comes to installing your chosen VPN, you’ll usually find plenty of different options. However, you'll want something simple and without unneeded complications or bloatware.

Winner: Both of these come with really simple installation procedures. Our personal preference would be ExpressVPN, as it has managed to polish this procedure and make it as straightforward as possible. However, you won’t make a mistake if you choose Surfshark, still suitable even for complete beginners.

Now, here's where the real battle begins. In this segment, we'll tell you about what kinds of features you can expect from these VPNs. With that said, make sure to pay attention.

Winner: Both ExpressVPN and Surfshark are among the safest VPNs out there. With ExpressVPN, you get a full set of features designed for both beginners and more advanced users. However, Surfshark offers that same thing, in addition to a couple of highly innovative features as well, which means that it wins this round.

We're sure that you’ll want to know about these VPNs' server networks. We'll tell you how many servers you can expect, in how many countries, and plenty more.

Winner: If you're looking for a VPN that has more servers, your pick should be Surfshark. Still, keep in mind that ExpressVPN offers a similar number of servers - while spreading them across 90+ countries. In our opinion, that is what matters more.

There’s a common misconception that VPNs are overly complicated to use. Maybe this was true a decade or two ago, but it’s no longer true for modern VPN applications. They usually come with highly polished interfaces that work for both beginners and advanced users.

Winner: Surfshark and ExpressVPN come with similar interfaces. They can be as simple or as complex as you want them to be, making them suitable for a wide range of users. No matter which of these you pick, you'll get powerful, highly intuitive, and quite polished apps overall.

Is media streaming important to you? Do you want to unblock various types of websites? If your answer is "Yes," then keep on reading this segment.

More on Streaming via VPN

Winner: Once again, it's impossible to say which VPN is better. No matter what kinds of websites and media streaming services you plan to unblock, know that both Surfshark and ExpressVPN can be the best tools right now to achieve your goals.

In this segment, we'll check what kinds of security- and privacy-related features these VPNs bring. So, continue reading our ExpressVPN vs. Surfshark VPN comparison to see which one protects your privacy in a better way.

Winner: Both of these VPN services have the power to protect your privacy online, in the most comprehensive way imaginable. However, considering that ExpressVPN has been on the market longer than Surfshark, it takes the win in this category.

It’s true that VPNs come with many benefits. However, it's also true that VPNs (no matter which one you pick) will make your Internet connection somewhat slower. So, let’s see what kind of performance you can expect out of these two VPNs.

Winner: In general, both Surfshark and ExpressVPN provide fast and stable performance. However, after having tested a range of local and long-distance servers, we conclude that Surfshark is a bit faster than its competitors. Therefore, it wins this round.

We have to note that when it comes to VPNs, their customer support is often an overlooked feature. However, something can go wrong from time to time, and you'll want to have a team watching your back. Most importantly, you'll want to have someone who'll assist you promptly.

Winner: Both of these VPN services come with admirable customer support. They offer live chat, nicely written tutorials, and they’ll be there for you in times of need. However, if we were to nitpick, we would choose ExpressVPN over Surfshark due to its swift response time.

Winner: Both of these VPNs offer a range of short- and long-term plans, accommodating the needs of various types of users. However, upon comparing their long-term plans, we'll see that Surfshark offers a lower price - even though we think that ExpressVPN provides more value overall.

ExpressVPN vs. Surfshark VPN – Which One Should Be Your Pick?

Overall, both of these VPNs are amazing choices. No matter which one you pick, you can be sure that your online privacy is protected in the best way possible. Therefore, we can pick the winner based on subtleties only. In this case, the winner would be ExpressVPN.

Even though Surfshark comes with a compelling set of features, its competitor comes with several additional tricks up its sleeve. This is a long-stand VPN with no problematic situations in its past. It comes with a verified no-logs policy, unblocks any website, uses the latest privacy-related technologies, and more. Therefore, we strongly recommend you subscribe to ExpressVPN.

You've reached the end of our ExpressVPN vs. Surfshark VPN comparison. If you have any questions or doubts, make sure to post your comment below. Thanks for reading!