How to Watch RaiPlay Outside of Italy – Use a Proven VPN to Bypass Geo Obstacles! 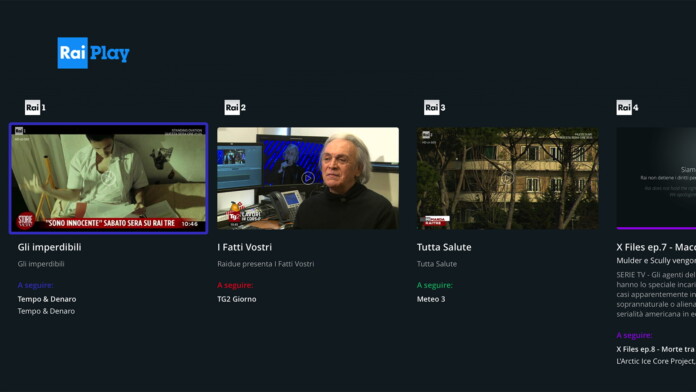 The national public broadcasting company in Italy, Rai, has a pretty great video-on-demand platform called RaiPlay. Unfortunately, access is only permitted from within Italy, so you’ll need a handy software solution if you want to use this streaming service. VPNs are really great tools and you’ll need to pick the one that’s just right for you, but that can also bypass the geographical restrictions imposed on the site. The right tool will not only be able to mask your location flawlessly, but it also needs to be able to protect your online privacy and identity. Here’s how to watch RaiPlay from outside of Italy.

We put together a list of VPNs that will help you want RaiPlay and more anywhere you may be. Check out our list and pick one.

Our first recommendation is ExpressVPN, a tool that’s been around for a while and has received numerous stellar reviews from experts and users alike. The tool allows for very fast connections and doesn’t throttle your Internet speeds. It also uses top encryption protocols to secure data, and the company runs zero-knowledge DNS on its over 2,000 servers so that everything is encrypted even there. The tool comes with a kill-switch so that none of your data reaches back to your ISP in case the connection to the VPN’s server fails.

Furthermore, if you want, you can only direct some of your traffic through the VPN’s servers, while the rest goes through your ISP because ExpressVPN supports split tunneling. Check out our ExpressVPN review to get all the info you need on it.

Next up on our list is IPVanish, a tool that comes with impressive multi-platform support that includes Windows, Mac, Linux, Android, iOS, Windows Phone, Fire TV, Chromebooks, and routers.

IPVanish uses 256-bit encryption protocols and promises to protect your privacy by keeping no traffic logs on its servers. There are over 1,000 servers in IPVanish’s network, so you are pretty much covered in finding one you need. We have a detailed review of IPVanish if you want to get all the info before making a decision.

Cyberghost is up next on our list – a tool that doesn’t throttle your Internet speeds once your connection has been routed through its servers. Furthermore, on top of using military-grade encryption protocols, Cyberghost also comes with built-in anti-malware software, as well as an ad-blocker to keep away those pesky ads.

The company has close to 3,000 servers in 59 countries and holds a zero-log policy. The VPN works on Mac, Linux, Android, iOS, and Android. Please, check out our Cyberghost review to get all the details.

The next VPN on our list – NordVPN – has one of the most impressive server networks we’ve seen thus far, with over close to 5,000 of them in 60+ countries. The number constantly grows as more servers are added.

NordVPN uses military-grade encryption protocols, and the company has a strict zero-logs policy in place. The tool also brings in some additional features, such as a double VPN, which hides you behind multiple servers at the same time, or CyberSec, which flags any dangerous websites you may want to visit. Check out our NordVPN review to get all the info you need.

Our final recommendation is Private Internet Access VPN. The tool has over 3,300 servers in its network, including plenty in Europe. This VPN solution encrypts all data going through their servers and holds no traffic logs on its users. Furthermore, the tool comes with support for P2P, so your torrenting habits are covered as well.

On the other hand, if you also want to get your hands on foreign Netflix and Hulu versions, there are only certain servers that will go undetected. Check our Private Internet Access VPN review to find out everything there is to know about this VPN.

After presenting you a list of VPNs that unblock RaiPlay from anywhere, we want to take another step. We’re going to answer some frequently asked questions, so take a look.

How Do VPNs Actually Work?

Access to RaiPlay is free of charge, and you only need to create an account by using your email address or by using the social login for easier access. Even so, you’d still need a VPN to make it look as if you’re in Italy.

VPN stands for Virtual Private Network, and it’s a tool that will change your IP address to match those in an area you want to appear to be, such as Rome. They’re also great tools if you love online privacy. To learn more, we have a comprehensive guide on how VPNs work.

Can You Get a Free VPN for RaiPlay?

We also want to take the time to warn you against ‘free VPNs’ that can be found online. The major issue they have is that they’re not free, meaning that they only offer a limited bandwidth for free, and when you consume all of it, you’re asked to pay. Then there’s the fact that most of them keep traffic logs on their users, thus voiding the privacy shield.

Investing in your privacy is always a good idea. So, take a closer look at the VPNs recommended in this article, and we’re sure you’ll find something interesting and affordable.

Why Use RaiPlay, In the First Place?

RaiPlay is the online platform associated with Rai, the Italian national public broadcasting company, which is owned by the government. Rai is one of the top televisions in Italy when it comes to audiences, and it’s composed of multiple stations.

RaiPlay mixes them all in together and includes TV series, shows, movies, kids’ shows, theater, music, and other programming. Only the news broadcasts are available outside of Italy. You can watch numerous movies divided by genre, such as The Tourist, Gone, The Golden Compass, Mordecai, and so on. You can also watch documentaries, theater plays, or kids’ shows like Masha and the Bear.

Where is RaiPlay Available?

As mentioned, RaiPlay is available only within Italy’s borders, with only the news broadcasts being available outside the country. This is not a surprise since most local platforms of this kind are blocked within the borders they serve.

What Devices Can You Watch RaiPlay On?

You can view the RaiPlay content on multiple platforms, including on your computers as long as you have a browser installed. You can also download dedicated apps for iOS and Android, so you can take things on the go if you so desire.

RaiPlay is a great platform that’s full of the type of content that will keep you extra busy for a while. Thankfully, you can now watch it from any corner of the world.

Let us know what you think in the comments section below, and share the article online so others can find it too. You can check us out on Facebook or Twitter.

Choosing which Web browser to use is hugely important. And, yes, all of those allow you to browse the Web – but there are...
Read more

How to Watch ‘Hamilton’ Online – Stream the Musical on Disney+

Hamilton has been one of the top Broadway musicals for quite some time now, and we're all finally going to be able to watch...
Read more

We're doing another round of golf this coming weekend, as the Rocket Mortgage Classic is kicking off. We're planning to watch this tournament on...
Read more

WeChat & WeMeet Officially Banned in India – Make Sure to Switch to These Popular Alternatives!

We’re sure that messaging apps are among the most often used apps on your smartphone. No matter if these are simple text-based messaging apps...
Read more

Alternatives for the Chinese Fashion Apps Banned in India

Fashion and shopping apps can be exciting for some, "therapeutic" for others, and even boredom-killers that offer endless inventories to browse for most people....
Read more
TechNews