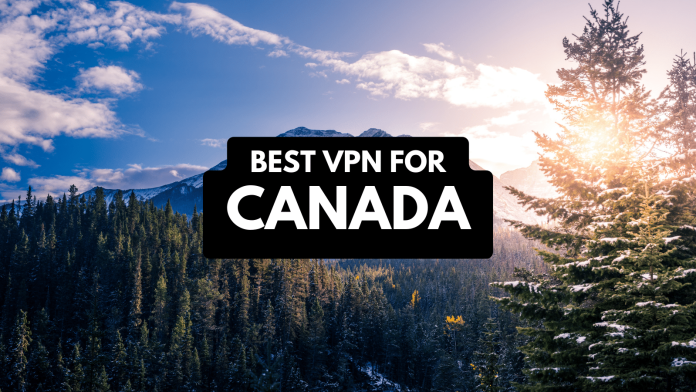 Mass surveillance in Canada is well-known. The Communications Security Establishment (CSE) logs citizens’ data and is part of the 5-Eyes Alliance. That said, if you plan on visiting Canada anytime soon or reside in the country, it’s a great idea to use a Canada VPN to keep prying eyes away when you access the Internet.

The best VPN for Canada will protect your privacy when you use the Web through various tools in its arsenal. Also, when you connect to a VPN server in Canada, you can access geo-restricted sites and streaming services.

That comes in handy when you travel abroad and encounter problems accessing your favorite content. What’s more, you can leverage a VPN’s global server network to unblock sites restricted in Canada. So, you get privacy and content unblocking, at the same time.

This article will walk you through the best VPNs for Canada and highlight their distinctive features that help seamlessly secure your connection. So, let’s jump right in!

How to Use a VPN in Canada

It’s easy to use a Canada VPN, as you need to subscribe to your chosen service and connect to one of its servers to secure your connection. Here’s how that’s done:

Get ExpressVPN for Canada

Use a VPN for Canada to quickly get a Canadian IP address and access sites that are only available in the region. On the other hand, if you’re facing trouble accessing certain apps or sites in Canada, connect to a server elsewhere on the globe to immediately restore access.

The best VPN in Canada must have a stringent no-logs policy that explicitly prohibits the service from collecting any of your data. This data can take many forms, including your IP address, browsing history, and connection timestamps. A good VPN will support the latest VPN protocols like OpenVPN and feature unbreakable 256-bit AES encryption. Last but not least, a VPN must be reasonably fast for Web services to work reliably. No one likes to wait for videos to endlessly buffer or games to remain stuck owing to high latency.

Based on the criteria explained above, these are the 5 best Canada VPN services:

ExpressVPN is the best VPN for Canada as it offers super-fast speeds that leave any other VPN in the dust. VPNs can make your connection painfully slow - not ExpressVPN, which employs lightning-fast 10Gbps servers, making it one of the fastest VPNs around.

Few Canada VPNs give as much forethought to every aspect of the user experience as ExpressVPN. You get intuitive apps for devices like phones, tablets, laptops, routers, and even smart TVs and game consoles. It’s super easy to set up in a few clicks or taps. You can use ExpressVPN with up to 5 simultaneous connections with just one subscription!

ExpressVPN features best-in-class 256-bit AES encryption that guards your sensitive traffic against network snoopers. The service even goes a step further than other VPNs and offers its own unique VPN protocol called Lightway, in addition to supporting popular protocols like OpenVPN and IKEv2. The Lightway protocol is perfected to bolster connection speeds, improve VPN security, and ensure more reliability in connections.

ExpressVPN has one of the most expansive server networks globally, with 3,000+ servers in 160 locations around the planet. It’s the best VPN with Canada servers for locations such as Montreal, Toronto, and Vancouver.

The company offers a 30-day money-back guarantee to evaluate all features and still get a refund if you don’t like the service. ExpressVPN offers 24/7 customer service over live chat in the rare event that you face any problems.

NordVPN is one of our favorite Canada VPNs, thanks to its blazing-fast performance and rich feature set. The VPN doesn’t log any Internet data and is headquartered in Panama, a privacy-friendly country with no mandate to collect any information.

We particularly like the advanced features NordVPN packs in, including double VPN functionality. NordVPN allows you to route your traffic through two different servers and benefit from double encryption. The first VPN server masks your IP address before it reaches a second server to again disguise it, further cementing your privacy online.

NordVPN is always expanding its portfolio of servers. At the moment, it has 5,000+ servers in 59 countries worldwide and has servers in Montreal, Vancouver, and Toronto. You can connect to a Canadian server close to you for the fastest connection speeds.

NordVPN also provides obfuscated servers optimized to hide the fact that you’re using this VPN. These servers scramble your internet traffic so that it appears random. As such, they’re great if you wish to unblock tougher-to-access websites.

The VPN offers a 30-day money-back guarantee. They also have a responsive customer support team that you can reach out to over live chat (24/7-available) or email.

CyberGhost is one of the best VPNs with Canada servers considering its rich privacy-friendly features. It has been independently audited and goes by a solid no-logs policy. The company is based in Romania, one of the most privacy-friendly countries, with no mandates to collect your data.

Another feature we’re fond of is CyberGhost’s RAM-only servers. When you connect to one of CyberGhost VPN’s servers, you leave no trail on their systems. Even if their server gets compromised (which hardly ever to happen), the adversary will have nothing to gain.

CyberGhost has servers in Montreal, Vancouver, and Toronto, making it one of the best Canada VPNs. Overall, it has 9,000+ servers in 90+ countries around the world. No matter where you are on the planet, you’ll always find a server close to your location for fast and anonymous browsing.

If you want to stream movies and TV shows, CyberGhost again emerges as one of the best VPNs for Canada, considering it has streaming-optimized servers for Netflix, Amazon Prime Video, BBC iPlayer, and more. There are even dedicated gaming- and torrenting-optimized servers.

CyberGhost offers an industry-leading 45-day money-back guarantee, a rare offering these days. Take the VPN for a test drive and get a full refund if you don’t find the VPN suitable for any reason within the trial period.

Private Internet Access is a trusted name in the VPN space, and for good reason - it’s one of the oldest players in the cybersecurity industry. PIA offers a spectacular array of features at an incredibly affordable price, so there’s plenty of value overall.

What makes PIA particularly great is that it has many VPN servers in Canada. You’ll find fast servers in Montreal, Ontario, Vancouver, and Toronto. PIA has a vast network of ultra-fast servers in 80+ countries around the world, so you can always connect to a server anywhere on the planet to unblock restricted sites in Canada.

PIA provides easy-to-use apps for iOS, Android, Windows, macOS, Linux, and smart TVs. The icing on the cake is that PIA’s apps are open source, which sets the VPN apart from its competitors. Since the source code is fully open, anyone can inspect PIA’s code, which brings unparalleled transparency. An active open-source community also means PIA is always growing and getting better.

PIA has a stringent no-logs policy that mandates the company not to store any user data logs. Also, it offers a 30-day money-back guarantee, which provides you with ample time to test out all features and know if it’s the right VPN for Canada based on your needs.

Surfshark is ideal for those who’d like to extend the benefits of VPN protection to all devices in the household. That said, Surfshark instantly protects every Internet-connected device on your network in one go.

In addition to powerful 256-bit AES encryption and support for advanced VPN protocols like WireGuard, Surfshark also packs in several other cool features. Take its cookie pop-up blocker, for example, which automatically blocks cookie consent pop-ups. It’s a feature you don’t find in most VPNs and comes in quite handy indeed.

The service is also really affordable and is a great Canada VPN option for those who’d like to enjoy VPN protection on a strict budget. Surfshark has 3,200+ servers in 100 countries globally and sports 120+ Canada servers in 3 locations: Vancouver, Toronto, and Montreal.

Surfshark offers an entire portfolio of privacy and security-focused solutions. That said, you can also try Surfshark Antivirus — a power-packed anti-malware solution for your Windows, macOS, and Android devices.

Lastly, you can take advantage of its 30-day money-back guarantee when you purchase a subscription. On top of that, you get 24/7-available live chat support.

Why Do I Need a VPN for Canada?

You need a VPN for Canada if you wish to stay anonymous on the Web and escape mass surveillance. A good Canada VPN will not only make your Internet connection more private and secure, but also help you access geo-restricted content.

Use a VPN in Canada to:

That’s not all; if you still need more reasons regarding why use a VPN, our comprehensive guide covers it all.

Can I Use a Free VPN for Canada?

Yes, you can use a free VPN for Canada, but we highly recommend against using it as it can compromise your privacy rather than protect it.

Running a VPN service incurs many costs, including the costs of maintaining a massive global server infrastructure. If a VPN offers its services to you for free, it’s likely to log your data and sell it off to third parties to generate revenue.

Free VPNs also often analyze your browsing and inject ads into your Internet traffic. This is a blatant invasion of your privacy rights. Premium VPNs charge you to keep their services functional and have a no-logs policy - a guarantee that they will not capture or sell your data to anyone.

If you still want to use a free VPN, you can pick from our list of the best free VPN services. However, know that you’ll always encounter limitations when using a free VPN.

The best VPN for Canada is one that can mask your identity in the country, protecting you from mass surveillance and keeping network snoopers away. An ideal VPN hides your IP address, encrypts your connection, and offers Canadian servers for a fast VPN connection. As you can see, those are plenty of requirements, and you have every right to be picky when choosing a VPN.

We recommend ExpressVPN as the best Canada VPN for its no-logs policy, fast servers, and a truly global server network. The service also has top-notch advanced features, including split tunneling and DNS leak protection.

Are VPNs Legal in Canada?

Yes, VPNs are legal in Canada. That said, you shouldn’t use a VPN for unlawful activities. There are no instances of people using VPNs to stay anonymous online getting into any trouble, so you should be good with using a VPN.

Yes, Canada allows the use of VPNs. It’s a great way to stay secure online. As long as you don’t use a VPN for unlawful purposes, you should be good to go.

Which VPN is Best for Canada?

We recommend ExpressVPN as the best VPN for Canada, as it can unblock restricted sites without issues and also restore access to Canadian sites when you’re abroad.

Can You Get in Trouble for Using a VPN in Canada?

No, as long as you use a VPN for protecting your privacy and don’t engage in unlawful acts, you should be fine. In fact, experts encourage the use of VPNs to protect your digital freedom and identity online.

That’s all for our guide to the best Canada VPNs. If you have questions, we’re all ears! Please leave us your thoughts in the comments section below. Thanks for reading!