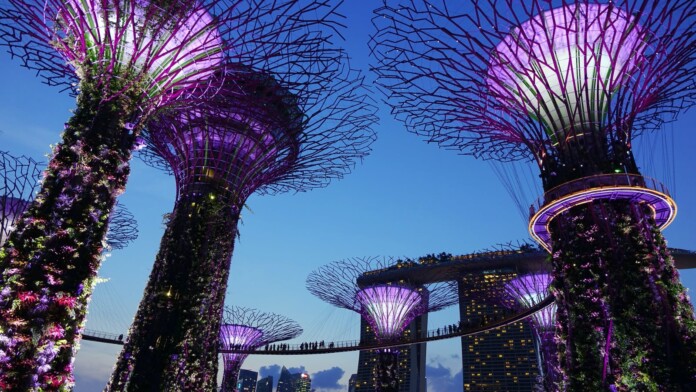 Singapore is chock-full of CCTV cameras monitoring every move of its citizens, and this extends to the online world. Singaporean laws feature vague phrasing that enables the government to spy on your online behavior without a court order. Moreover, plenty of websites are blocked in the country. As such, we've put together a list of the best VPNs for Singapore to give you a fighting chance against mass surveillance.

That, and offer you a way to enjoy all the content the Internet can offer without pesky geo-blocks and online censorship getting in the way of your fun. As you're probably aware, many popular streaming services aren't available in Singapore. With that in mind, we'll recommend VPNs that can easily unblock most popular streaming platforms, including Netflix US, Hulu, BBC iPlayer, and many more.

Here Are the 5 Best VPNs for Singapore - Privacy, Security, and Entertainment in a Few Clicks!

Below you'll find the 5 best VPNs for Singapore in 2021. Whether you're doing some online banking, gaming, streaming video, or just casually browsing, these providers have all the features you need for a smoother Internet experience.

When it comes to the best VPNs for Singapore, it's hard to find any faults with ExpressVPN. It offers industry-leading security, a fairly wide server network, and can unblock most streaming platforms from around the world with ease.

The app has recently gone through a redesign, on top of introducing a new VPN protocol called Lightway, which promises even faster speeds than the older OpenVPN standard. You're still free to use the latter protocol, obviously - especially if you plan on installing the VPN on your router.

The only thing you can hold against the provider is that their subscription plans are a bit on the expensive side. However, with such a feature-rich, high-performance app, the price point is hardly a surprise.

All this is just scratching the surface. To learn more about the app and its provider, take a look at our ExpressVPN review. Speed tests inside!

Don't let CyberGhost VPN's cute logo and bubbly social media presence fool you - their app is still a beast when it comes to securing your data from government surveillance and hacking.

CyberGhost VPN has an easy-to-use interface and comes equipped with all you need right out of the box. Of course, the app conceals a host of complex customization options as well. Perfect for optimizing your experience for different online acitivities - whether it's web browsing, playing online games, or streaming online media.

Speaking of which, you can choose servers optimized for specific streaming platforms - including Netflix US, Netflix DE, Netflix FR, BBC iPlayer, Hulu, Crunchyroll, and even YouTube. This option can be found on the provider's website as well.

You can see which other content platforms this VPN can unblock (as well as other relevant info about the app and provider) by reading our CyberGhost VPN review.

Despite its short three years of existence, Surfshark has been consistently popping up among top-ranking VPN lists - and for good reason. It comes with a huge list of benefits, complemented by an affordable price, which makes it one of the best VPNs for Singapore in 2021.

What distinguishes Surfshark from the competition is the fact that you can install and use their app on as many devices as you want, which is pretty rare in the world of VPNs. Do you and your family or friends like to switch between your PCs, smartphones, laptops, and other devices while you go about your day? Then Surfshark is the perfect choice.

Make sure to check our Surfshark review to get the complete scoop on the provider, along with our performance tests.

We would have ranked this provider at least second on our list if it weren't for the recent NordVPN hacking incident. Now, no user data was affected, and the fault lies with a data center NordVPN were working with at the time. However, their lackluster response means they'll need to work hard to clear their name and regain their spot among the industry leaders.

Fortunately, NordVPN are committed to doing just that. After cutting ties with the affected data center, they've redoubled their efforts at creating a more secure app for their users. Their new NordLynx protocol (based on WireGuard) ensures lightning-fast speeds while also fixing some inherent security problems with WireGuard.

And finally, as the saying goes, "don't throw the baby out with the bathwater." NordVPN still has all the features and qualities that made them top the lists along with ExpressVPN. One incident shouldn't be enough to discard them as one of the best VPNs for Singapore.

Read our full NordVPN review to learn why their service is still worth it.

Let's make one thing clear: none of the providers on our list keep any user logs. However, if we were to judge their no-logs policies by feats alone, PIA would be the clear winner. Why? Well, their no-logs claims were tested and proven true in court - twice! It's a true test of the provider's commitment to privacy when not even the FBI can make them flinch.

Otherwise, you're looking at a fairly decent Singapore VPN with over 22,000+ servers worldwide as of December 2020. Many of those servers are US-based, so accessing video content from Netflix, Hulu, and other American streaming platforms should pose no problems.

As always, be sure to check out our Private Internet Access review for the full details.

Which Websites Are Blocked in Singapore and Why?

An obvious target are websites found in violation of copyright laws. As a result, plenty of pirate sites are blocked in Singapore. Then again, this trend is nothing new, and plenty of other countries have imposed ISP-level blocks on copyright-infringing websites.

"Adult" content is also blocked (overseas gambling websites in particular) or partially blocked. Various pornographic websites have been banned in what's been called by the IMDA, a "symbolic gesture". Web pages that display information about drugs and other illegal activity are also routinely blocked by the Institute of Technical Education.

The country's Protection from Online Falsehoods and Manipulation Act (POFMA) - basically an anti-"fake news" act - has also been brought into question. Most recently, the Singapore government has blocked a Malaysian human rights website (Lawyers for Liberty) for refusing to add a correction note alongside its content.

Luckily, using a VPN in Singapore will allow you to access all previously blocked web pages and hide your browsing history from your ISP. Obviously, don't use that as an excuse to access illegal or shady content.

How Do I Use a VPN in Singapore? (Short Guide)

You don't need much technical experience to use a basic VPN setup. Simply follow these steps and you're good to go:

You're done! Enjoy safe browsing, bypassing geo-blocks and censorship, and not being spied on.

VPNs can be confusing for people just starting out. Let's shed some light on the topic and answer some of your burning questions on the topic.

Are VPNs Legal in Singapore?

That being said, the act of using VPNs in Singapore is not illegal. What is illegal is using these tools to download copyrighted material. While ISPs can’t detect what you download via VPNs, we advise against pirating content.

How to Get a Singapore IP Address?

You can obtain a Singaporean IP address by using any of the VPNs recommended on our list. All of our choices have plenty of servers located in Singapore. This is useful in case you want to watch exclusive Singapore content while you're abroad, or need to access local services (such as online banking) in a secure manner.

You can learn more by reading our hands-on guide on how to get a Singaporean IP.

As you surely know, Netflix is available in Singapore, but it has a fairly limited number of titles. It's nowhere near the top 10 Netflix libraries - meaning you're missing out on thousands of movies and shows. You’re already paying for the service, so you have every right to take full advantage of it by using a Singapore VPN. To learn more, here’s our guide to watching the US version of Netflix.

How to Get a Free Singapore Proxy?

A proxy can never fully protect you online, as they expose your data to your Internet service provider. In addition, services like Netflix, Hulu, HBO, and others have an easy time blocking proxies. We strongly recommend using one of our top VPN choices for Singapore - ExpressVPN is a great pick if you're just starting out.

Free VPNs promise to keep you safe online without having to pay a single dollar. Of course, they still need to make money somehow. As many free VPNs rely on advertising, you’ll often see a bunch of ads injected into your browser, ruining your user experience.

Some free VPNs even sell your data to advertisers and other shady third parties. That is, when they're not busy leaking your data online. Even if they don't, you just won't get the same level of performance as a subscription-based service. In fact, free providers will often impose data caps or throttle your speeds, on top of being easily blocked by services like Netflix.

That's about it when it comes to the best VPNs for Singapore in 2021. Anything on your mind about privacy and blocked content in Singapore, or how to use a VPN? Drop us a comment below, and we'll be happy to help.