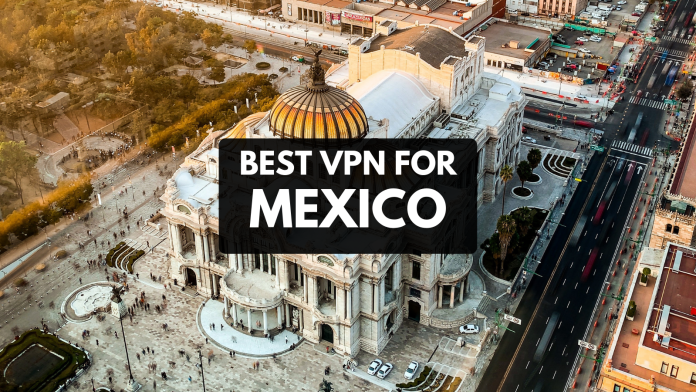 All Internet users need a VPN at one point or another, regardless of their location. However, in a country such as Mexico, where many sites and Internet services are inaccessible due to geo-restriction issues, a VPN is a must-have. That said, we're here to help you find the best Mexico VPN, based on our tests and hands-on experience.

We'll also add that aside from providing access to blocked Internet services, a VPN protects your sensitive data from scammers and hackers. This is especially important in a country like Mexico, where cybercrime is on the rise.

Additionally, your concern might only be privacy. You might not want Mexican ISPs (Internet Service Providers) to give your information to the government or any third party. A proven and reliable Mexico VPN can help you secure your privacy by encrypting your data.

As you can see, a VPN fortifies your online security and helps you do more on the Internet. And we've paved the way for you. If you keep reading, you will get to know about the best VPN for Mexico at the moment.

How to Get a VPN in Mexico

Getting a Mexican IP is very simple; you don't have to be a tech expert. All you need is a reliable VPN with servers in that country. So, do the following:

Get Mexican IP with ExpressVPN

Selecting the best VPN for Mexico depends on several factors and criteria that must be fulfilled. For example, you'll want a VPN with solid protocols (OpenVPN, WireGuard) and high-end encryption (AES-256). Then, it must offer servers in Mexico and as many other countries as possible. And also, you'll want a VPN that can unblock websites and digital services.

Using the above criteria, here are the 3 best VPN services with Mexico servers right now:

At the moment, ExpressVPN is the best VPN for Mexico because it's easy to use, works on any device, brings a vast server network, and provides plenty of value overall. That said, you surely won't make a mistake if you decide to subscribe.

This VPN has more than 3,000 servers in 160 locations spread across 94 countries globally, covering Mexico as well. ExpressVPN's server protocols supported in Mexico include Lightway, OpenVPN, as well as IKEv2. So, you'll get the same treatment as everyone else.

Additionally, ExpressVPN has unlimited bandwidth and a 5-connection limit. This means a single subscription can be used simultaneously on 5 devices, but you can install the app on as many devices as you want.

ExpressVPN’s fast Internet speeds, outstanding content-unblocking ability, and extensive server network make it an excellent choice for unblocking streaming content in Mexico and elsewhere. It can unblock services within Mexico, as well as sites that are not available there.

Interestingly, ExpressVPN offers a 30-day money-back guarantee for all payment methods. So, if users change their minds after using this VPN because it doesn't suit their needs, they get their money back. Also, there's 24/7-available live chat as well.

NordVPN has about 5,500 servers across 59 countries. Out of NordVPN's 5,500 servers, around 10 are located in Mexico. That might not seem like much, but it's actually more than you'll need to achieve fast performance and media streaming without interruptions.

In terms of streaming, NordVPN's delivery is top-notch. This capable Mexico VPN unblocks even the most popular TV networks and streaming services in the country, such as Las Estrellas, Blim TV, Azteca Uno, Canal 5, and more. And with its fast speeds, users wouldn't have to kick their heels for their torrents to finish downloading.

A “no-logs VPN” does not store or log traffic that passes through its servers. This means NordVPN does not log the sites you visit, the files you download, or the amount of data you use. It's been audited many times in the past, as well.

CyberGhost VPN is another potent competitor in the world of the best Mexico VPN services, known for its excellent delivery. It has one of the largest server networks in the VPN industry, with over 9,000+ servers across 90+ countries. Around 50 of those are found in Mexico City.

This VPN provides users with the perfect blend of privacy and affordable prices. With a privacy policy that ascertains absolute anonymity, it’s a solid option that most Mexico VPN users will love. However, one of its significant downsides is its relatively slow speed. In other words, you might need to tinker with this VPN when connecting to its remote servers.

Nevertheless, CyberGhost VPN provides users with extra features, such as DNS leak protection, a kill switch, an ad blocker, and a malware blocker. Moreover, CyberGhost VPN has high-grade encryption, a range of strong protocols, and other excellent security features; therefore, users don’t have to worry about their online activity being leaked.

We'll also mention that you'll get streaming-ready servers. This VPN offers dozens of servers optimized for various streaming services, both mainstream and niche. So, that makes it a particularly good option for streaming.

Lastly, know that CyberGhost VPN offers 24/7-available customer, including live chat. And, if you pick one of its long-term plans, you'll get up to 45 days to change your mind. That said, this VPN's money-back guarantee is one of the most generous in the VPN industry.

Can I Use A Free VPN in Mexico?

Yes, you can use a free VPN in Mexico, but that is not advisable, and there are many reasons for this. As enticing as the word "free" might look, you won't be receiving the same benefits compared to a premium-priced VPN service.

Unlike paid VPNs that offer sizable server networks globally, free VPN services provide you with limited options (also, you won't get to find a server located in Mexico). Hence, there's a limit to the types and amount of servers you can connect to.

Moreover, free VPNs tend to be quite slow. This is because too many people use a limited number of servers since they're free. So, activities such as streaming or gaming aren't possible.

So, is it advisable to use a free VPN for Mexico? Not exactly; we don't recommend that. A suitable alternative would be to use a free trial VPN that offers a money-back guarantee.

That said, ExpressVPN is the perfect option when looking to buy a VPN subscription without any risk. More precisely, ExpressVPN's 30-day risk-free trial provides you with just what you need in terms of a Mexico VPN, and if you're not satisfied, you can ask for a refund.

We believe that the best VPN for Mexico should protect you online, let you access blocked sites, and allow you to stream and play games without limitation. You'll want a proven and fast option, especially since Internet speeds in Mexico aren't the fastest.

Compared to other VPNs, ExpressVPN has little or no impact on regular Internet connection speed; it doesn't slow users down. Its streaming and unblocking capabilities in Mexico are top-notch. ExpressVPN has one of the largest arrays of servers distributed worldwide, including Mexico, and users can easily switch between servers.

All these bolster the fact that ExpressVPN is the best Mexico VPN at the moment (sign up for ExpressVPN risk-free today). For more options, check our guide to the best VPN services.

Are VPNs Legal In Mexico?

Yes, VPNs are legal in Mexico. You can pick any commercially available VPN and use it to protect the privacy of your digital information while using the Web in the country.

Which VPN Has Mexico Servers?

A range of VPNs have servers in Mexico - but we highly recommend ExpressVPN, NordVPN, and CyberGhost VPN, as those are the best options at the moment.

Does NordVPN Have Servers in Mexico?

That would be all for our guide to the best Mexico VPN services. If you have any questions, let us know via the comments section below. Thank you for reading!