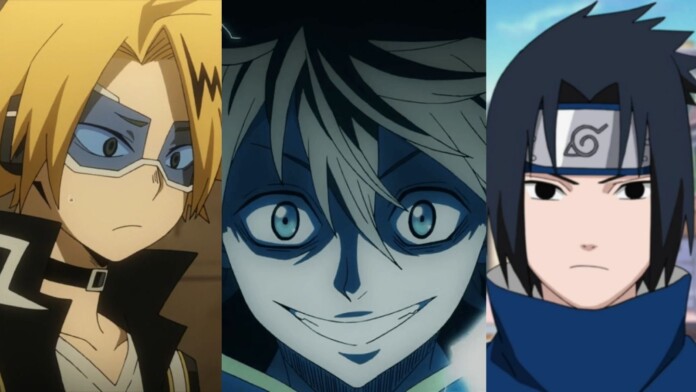 Few natural phenomena strike fear into the hearts of humans than lighting. While you might survive a lightning strike, you'll probably wish you hadn't. These 10 anime characters are some of the strongest users of lightning and electricity in all of anime.

If we're honest, Denki is a bit of a fool, and he becomes even more of one if he uses his lightning power too much. If he goes over his limits, his brain is fried for about an hour, and the only thing he's good at is drooling on himself.

Don't let that fool you though, not only is Denki great at stunning even much more powerful enemies, he can perform an area attack that can take down friend and foe alike. Denki still has a lot of growth left to go, but he already deserves to be on this list.

Pickachu is, despite how it looks, a mouse. Pikachu's species is the intermediate step between a Pichu and a Raichu is famous because of the specific Pikachu that accompanied Ash Ketchum in the original anime series, now known as the "Indigo League."

Famously, Ash refuses to evolve Pikachu into a Raichu, but this does nothing to diminish the potential for Pikachu's lighting powers. In fact, rejecting the evolution opportunity lets this Pikachu reach heights others of his species never see - and even large and dangerous pokemon know to be wary of this little mouse's potent electric attacks.

Zatch Bell is a curious character, partnered with the boy genius Kiyo Takamine. We start off thinking that Zatch is just another human boy who's lost his memory. However, it's quickly revealed that Zatch is a Mamodo, a type of spiritual being with extraordinary powers. Zatch is the son of the Mamodo king, and he's in competition with other potential successors to one day take the crown.

His powers almost all revolve around lightning, and his "Bao" power lets him summon a giant lightning dragon. Honestly, any power that combines the words "lightning" and "dragon" probably deserves to be on this list.

Killua is the secondary protagonist in the immensely popular Hunter x Hunter franchise. Despite an apparently cheerful demeanor and a love for chocolate, Killua's bloodlust is something to behold. When he goes into assassin mode, you're dead. Not only is he a genius, a master combatant, strategist, and tactician, but he's also got sick electrical powers to boot.

Over years of being tortured with electric shocks, among other things, Killua has learned how to transform his spiritual energy into electricity. His main weakness here is that he needs a jumpstart from an external source, such as a taser. However, once ready to go, he can electrocute and burn opponents who merely touch him and can even cast lightning strikes at a distance. Not to mention, like so many other lightning-type characters, Killua can use his powers to increase his speed to absolutely inhuman levels. Not bad for such a disarming little kid!

Sasuke of the Uchiha clan is the hero Naruto's main rival in the ninja-centric world of Naruto. Sasuke is the sole survivor (apart from his brother) of his clan's massacre and is a ninja genius capable of using all of the nature transformations possible in their world's version of ninjutsu. As an Uchiha, Sasuke's affinity is actually for fire, but under the guidance of his teacher Hatake Kakashi, he learns Chidori, a lightning release technique that lets the wielder cut anything with their hand by coating it in lightning.

As he matures, Sasuke discovers more and more ways to use lighting, including coating his sword into it so that it can cut through almost anything. He also later learns to augment his speed with lightning as well. Sasuke is dangerous thanks to his wide variety of abilities, but there's no doubt that his mastery of lightning is a big part of what makes him so deadly.

Darker Than Black is a story of a world that's gone through a meeting with the supernatural, and some individuals have given up their human emotions in exchange for powers as a result. Hei is one of these "contractors" and is known as the Black Reaper. His powers come in handy for assassinations, given that he can manipulate matter at the quantum and molecular levels.

Hei can also generate electricity and send it through conductive materials and easily stop a human target's heart with a touch. His expert-level weapons and martial arts skills mean he can put his electrical powers to devastating use. Using a knife with an attached wire, Hei can really put that electrical charge where it hurts.

When we first meet Zenitsu, he's a big of a coward, and it's not clear how such an apparently wimpy guy made it through the tough training to become a demon slayer. However, Zenitsu's true power comes to the fore when pushed into a corner, even though he doesn't know it himself.

While he's a competent swordsman when awake, he becomes the ultimate weapon in his sleep, wielding the power of lightning and the sword to devastate even the most powerful demons. While Zenitsu was only able to master the first form of the Thunder Breathing style, he's become incredibly good at making the most of that single devastating thunderclap and flash move. The last thing any demon should do is underestimate this plucky swordsman.

Despite looking like a sweet young man, Luck Voltia is a battle-crazed magic knight who fits right in with the other oddball members of the Black Bulls order. He's a sociopathic lad who can't curb his manic joy, and he'll fight friend or foe alike for a laugh.

He uses lightning magic to a devasting effect in combat. Luck's main attack involves forming two lightning claws around his own arms and slashing at his opponent. At the same time, he can enhance his own body to become insanely fast and strong. His real genius comes from combining his lightning magic with other types of magic to create deadly combos more potent than either element by itself.

Gilthunter is one of the top-ranked Holy Knights, who initially acts as an antagonist to the titular Seven Deadly Sins. We won't spoil anything here, so you'll have to watch the show to know the real truth about Gilthunter.

What we can talk about are his devastating powers. As a diamond-ranked holy knight, he's generally crazy strong. However, he specializes in lightning magic and can effortlessly destroy entire villages if he wants to. He can use lightning to enhance his own abilities or to really give his sword a cutting edge. He's fast, strong, and won't hesitate to turn his opponents into atoms. The pink hair does nothing to make Gilthunter less intimidating.

As god of the Skypiea island, Enel has a whole suite of powers. Including control of the island itself. His main strength lies in lightning, which usually makes him an incredibly tough opponent. However, since Once Piece's hero Luffy D. Monkey's power is rubber, Enel turns out to be ineffective against him. That turns out to be the wrong impression because Enel can destroy almost anyone who doesn't happen to have the specific immunity needed to stand against him.

It's not so much that Enel has lightning powers, but that thanks to the Devil Fruit he consumed, Enel is lightning- he can turn his body or parts of it into lightning. Additionally, he can create lightning, channel it, and use lighting to attack his enemies in a variety of ways. With the help of his ship as a power amplifier, Enel can destroy a whole island, can move at the speed of lighting, move through conductive materials, and even restart his own heart with electricity if it stops. There's no doubt Enel is one of the strongest lightning users.