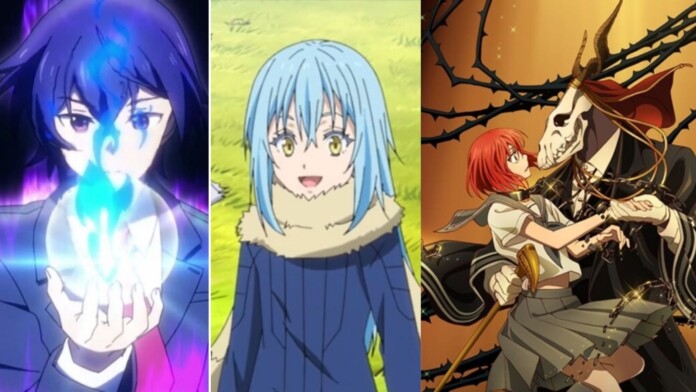 Magic is a mysterious power far beyond human understanding, but many anime characters wield it to one extent or another. We've tried to put together a list of the most powerful magic users in anime here, but there are some rules - we haven't picked more than one option from the same show, and we've also considered their level of power relative to the world in which they live. This means someone who is very powerful in their world can rank higher than someone who has more firepower but lives in a world with many other powerful mages.

So let's see who are the top 10 strongest magic users in anime.

Megumin is a classic glass cannon - she has one big attack but can't take any punishment. Pouring all of her XP into explosion magic, she can cast a devastating, landscape-destroying explosion. However, she can generally only do it once a day and can't even move her body immediately after blowing her load. She's crazy powerful indeed, but a bit of a dingus. So she comes right at the bottom of this list of strongest magic users.

Lina is a magical mercenary with a bent personality and a love of money and smashing bandits. Lina is a genius at creating custom magic spells for almost every occasion and is a black magic specialist. Sometimes her magical experiments go a little wrong, such as the accidental transformation of a perfectly good body of water into a sea of death - but the occasional mistake aside, there's no arguing her destructive potential as a magic user.

The titular magus from this fantastic romantic anime, Elias, isn't human. In fact, it's not entirely clear what sort of magical being he is, but we do know that he's old enough to be virtually primordial.

He's a mage of shadow, darkness, and destruction, but in general, his magic isn't flashy. He can produce shadows and hide in them, change his shape, and instantly conjure thorns. Elias can also work magic on the mind, removing memories of the past. Taken all together and he can actually be more devastating than someone who throws giant fireballs around. Those powers can change the world with enough time and intelligence, and Elias has an ample supply of both.

This isn't the bearded old wizard from Arthurian legend. Merlin from the Seven Deadly Sins is a scantily clad woman whose confidence seems inverse to how much skin she's showing. However, when you're almost literally a goddess on the power scale, we guess you stop really caring about petty human concerns such as modesty. Just look at the Greek pantheon.

Merlin's greatest power is her intelligence, but it's that very intelligence that lets her gain various powers across the span of her long, long life. Blessed with power from both the divine and demonic sides of the spectrum and with a vast knowledge of magic, Merlin's very name strikes fear into the hearts of even the toughest enemies. She has many spells, but the two most powerful must surely be Infinity and Absolute Cancel. Infinity lets Merlin stop time for her spells, making them last forever. Absolute Cancel lets her erase spells from existence. There are many more potent powers in her toolbag, but just those two alone would make her one of the most dangerous people in her world.

Turned into a demon, raised by a dragon and imbued with dragon slayer fire magic. Do we need to say more? Natsu is almost like the living embodiment of fire and uses it for almost everything. He can use it to fly, strengthen and heal himself, and fire-punch almost any living thing into a charred pulp. Good thing he's not with the bad guys, right?

Aww, just look at that cutie! It looks like she'd never hurt a fly. OK, maybe a fly because "Kumoko" (as fans have named her) is a spider. There's no official name for the protagonist in this story, but we do know that she's a spider born with the memories of a previous life as a student from Japan. She was an introvert and a bit of a geek in her previous life, but in this new world, her optimistic personality and sharp wits quickly help her level up and conquer other monsters.

Kumoko learns devastating magic that eventually lets her take on elder dragons, demon lords, and her own gigantic, powerful spider mother herself. By the end of the show's first season, her magic is strong enough to effectively make her indestructible and immortal, but the road there is anything but easy.

The 28th Magic Emperor and leader of all Magic Knights is basically a magic otaku. He's obsessed with magic on a very geeky level, and as a result, he eventually became the most powerful magic user in the world and ascended to the throne.

Julius's most powerful magic allows him to manipulate time, which lets him destroy and heal with equal ease. He also has immense speeds, the ability to look like someone else, and the ability to control all of the mana around him. He might even have some power of death itself, so it's best never to underestimate this goofball genius.

We tried hard not to feature too many OP isekai characters on this list, but in the end, we had to relent since so many of them are legitimate magical monsters. Shin Wolford's inclusion on this list feels the most divisive since he's perhaps the current posterchild for overpowered isekai protagonists. It feels that way since he doesn't really have any weaknesses or character flaws, skirting dangerously close to the Mary Sue/Marty Stu trope.

Yet we can't help but actually like Shin, who dies in our world and is reincarnated as a baby in an unknown magical, medieval world. He's found and raised by one of the greatest mages, one of the greatest magical item enchanters, and the best swordsman in the kingdom. Since Shin carries scientific knowledge from his past life, he's able to craft magical spells far more powerful than anyone else and can do it without chants. By applying 21st-century logic and knowledge to magic, he upends the power balance, and every one of his ideas has the potential to cause global conflict. So yeah, Marty Stu or not, he's one of the most comically powerful anime mages ever.

2. Rimuru Tempest - Reincarnated as a Slime

Rimuru started his life in a new world as the reincarnation of a kind Japanese salaryman killed by a seemingly random dude with a knife. From the start, Rimuru is blessed with a few important powers, such as immunity to pain and "Sage," a power that helps him learn about the world - sort of like having your own internal Google Assistant. Soon after awakening in the world, Rimuru meets the dragon Veldora who names him Rimuru Tempest and grants him immense magical power.

From here, Rimuru ventures out into the world and starts to unify the different monster races, bringing his affable management skills and cheat-level magical power to bear on city-building and diplomatic relations with both human and non-human nations. Soon, he starts to attract the attention of powerful beings known as demon lords. He has to keep increasing his abilities to face them on an even footing. It doesn't take long before his magical powers reach a point that verges on the godlike, and so far, it's been a blast seeing Rimuru rise to power.

Momonga (later renamed Ains Ooal Gown) is the undead guild leader of the Great Tomb of Nazarick. The entire tomb and all its occupants have been transported from a doomed game world to an unknown fantasy realm. Momonga is actually the avatar of an online gamer from our world. Now he finds he must play the role of the overlord in this powerful, monstrous body.

Ains is, so far as we've seen, the most powerful magic user in the entire world. He can summon eldritch horrors to decimate armies, reanimate dead foes, or increase his own physical abilities to the point of invincibility. No magical feat seems to be beyond him, and his powers are now focused on two things: finding other players in the world like him and conquering the whole thing.