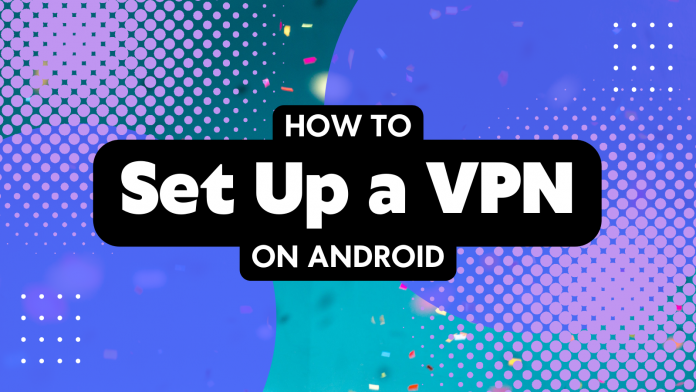 Whether you have a smartphone or tablet, you can set up a VPN on Android in under a minute. We all know that Android is a fairly open platform, which means that you have several options available in front of you in terms of installing Android VPN apps.

More precisely, we'll explain 4 different ways to set up a VPN on Android - using Google's Play Store, "sideloading" a VPN app, utilizing an OpenVPN client, and configuring a VPN manually. So, you can make your pick based on your end goal and your level of VPN-related knowledge.

Let's waste no more time! Here's everything you need to know about getting started with using a VPN on your Android phone or tablet.

How to Set Up a VPN on Android

Ready to get started? Here are the 4 best and easiest methods to install a VPN on Android:

Method #1: Set Up a VPN on Android via Google's Play Store

The easiest way to install an Android VPN app is via the Play Store. That way, you'll also get to keep your VPN app up-to-date at all times. Here's what you need to do:

1. Subscribe to a VPN with a native Android app. Our recommendation is ExpressVPN. (You can try it risk-free for 30 days.)

4. You might need to enter a verification code. So, keep an eye on your email inbox.

7. Tap "Get It On Google Play." ExpressVPN's listing on the Play Store should now open.

8. Tap "Install," and the app will download and install automatically.

11. Decide whether you want to share anonymous analytics with ExpressVPN.

12. Tap "OK" when asked by ExpressVPN to install a VPN connection profile.

13. You should be looking at the VPN's home screen now.

14. To connect to the nearest optimal server, tap the circular ON/OFF switch.

15. To manually pick a VPN location, use the button underneath the ON/OFF switch.

That's it! You now have full and unrestricted access to ExpressVPN on your Android. We'll remind you that ExpressVPN comes with unrestricted bandwidth. So, you can leave it active at all times.

Method #2: Set Up a VPN on Android by "Sideloading" the App

Those seeking the highest possible protection of their data might want to install apps by going around the Play Store. This means you can "sideload" your VPN app - by downloading its APK file. Here's how to set up a VPN on your Android using that method:

1. Subscribe to a VPN service that allows sideloading. Your pick should be ExpressVPN.

4. You should now see several options regarding installing ExpressVPN on Android.

If ExpressVPN doesn't show you Android-related options once you log in, scroll up on that page. Tap "Set Up Other Devices." Then, select "Android" to review various options on offer by this capable VPN service.

7. Tap "Install." Check if any extra steps are required (the installer will let you know).

11. Tap the ON/OFF switch to allow ExpressVPN to find the most suitable server.

12. To pick a server manually, use the button below the ON/OFF switch.

13. You can disconnect at any moment using the ON/OFF switch again. That's it!

Remember that you can update your "sideloaded" app, but only manually. Simply download the latest APK file and reinstall the app. The new version will replace the existing version on your phone, keeping all your settings and preferences.

Method #3: Set Up an Android VPN via OpenVPN Connect

While it’s pretty rare these days, some VPN providers may not have a native Android app. Still, if they support the OpenVPN protocol, you have one more option at your disposal. So, here's how to use a VPN on Android by relying on a third-party OpenVPN client:

1. You need a VPN that supports OpenVPN. We recommend subscribing to ExpressVPN.

4. Tap "Set Up Other Devices" and then pick "Manual Configuration."

5. Pick "OpenVPN" and note your OpenVPN username and password.

6. Scroll down and pick a VPN server/location. Download its OVPN file to your Android device.

7. Next, download and install OpenVPN Connect for Android using the Play Store.

8. Open the app and tap the "File" tab. Import your OVPN file to OpenVPN Connect.

9. Don't forget to input your OpenVPN username and password. Save your credentials.

10. To connect, tap the switch next to your newly added VPN connection. That's it!

Feel free to add as many OpenVPN connections as you want. However, remember that you can have a single connection active at any given moment. To switch to another server, visit OpenVPN Connect, disconnect from your currently used server, and then connect to a new one.

Method #4: Set up & Configure a VPN on Android Manually

If everything else fails, you can configure a VPN on Android manually. You’ll need certain configuration information from your VPN provider, and you'll need to configure an L2TP connection. So, here's how you can do that:

1. You need a VPN that supports L2TP connections. So, subscribe to ExpressVPN.

3. Use your credentials to access your ExpressVPN online dashboard.

4. Tap "Set Up Other Devices." Then, pick "Manual Configuration."

5. Make sure to select the "L2TP/IPsec" button. Then, note your username and password.

6. Just below, you'll see VPN locations and their server addresses. So, pick one.

Different Android devices have different user interfaces. Your goal should be to reach your device's VPN-related settings. If you can't find those, a quick Google search should help you to find those settings based on the smartphone model you use.

9. You should now see the "Edit VPN" interface. Here's the information you need to add:

11. Tap on the newly created VPN connection, and you'll be prompted for your credentials.

13. Your VPN session should now be active. That's it!

Android is a very open platform, which is why there are multiple ways to set up a VPN. However, we'll remind you that the easiest path is to use Google's Play Store. So, if you plan to use that route, make sure to go for a trustworthy VPN.

As you can see in our guide to the best VPNs for Android, we highly recommend ExpressVPN. It's the most powerful option available, suitable for beginners and advanced users alike. You can also try ExpressVPN risk-free for 30 days.

Lastly, we'll recommend our central guide on setting up a VPN, especially if you wish to install VPNs on non-Android devices. We covered 60+ platforms in that guide.

Does Android Have a Built-In VPN?

Yes, Android comes with a built-in VPN client. That means you can use your Android device's "Settings" app to configure new VPN connections.

In other words, Android's built-in VPN client doesn't allow you to connect to VPN servers on its own. Instead, you need to be a subscriber to a commercial VPN service.

Is It Safe to Install a VPN on Android?

In general, yes - it's safe to install VPN apps on Android. However, we recommend being very cautious regarding what you install on your device.

Keep in mind that malicious VPNs can act as malware on Android, which we've seen happen many times before. So, use a trustworthy VPN only, like ExpressVPN.

How Do I Use an Android VPN With Chrome?

Once you configure a VPN on Android, all your incoming and outgoing Web traffic will be encrypted and protected, including your Chrome-related traffic.

In other words, once you use a native Android VPN app to connect to a VPN server, all your device's traffic will be encrypted. So, you're free to use Chrome or any other apps in a safe and secure way.

How Do I Set Up a VPN on My Samsung Phone?

The easiest way to set up a VPN on any Android phone is by using the Play Store. That also applies to Samsung phones.

So, subscribe to ExpressVPN, download its app from the Play Store on your Samsung device, log in, and you're ready to go. As easy as that!

How Can I Use an Android VPN Without an App?

If your chosen VPN service comes without an Android app, you can still use it. As explained in this article, you can configure a VPN manually or use the OpenVPN Connect app.

That means you have 2 ways to configure an Android VPN manually, based on whether you're after L2TP or OpenVPN connections. Find more information above.

How Can I Set Up a VPN on Android for Free?

You can set up a free Android VPN app in several different ways. For example, you can download it from the Play Store or configure it manually.

However, our strong recommendation is to avoid using free-of-charge VPNs. Those apps are dangerous, especially on Android. They engager your privacy, leak your personal data and take advantage of your device.

Make sure to go for a reputable VPN, such as ExpressVPN.

You've reached the end of our guide to setting up a VPN on Android. In case of any questions or troubles, feel free to use the comments section below. Thank you for reading!