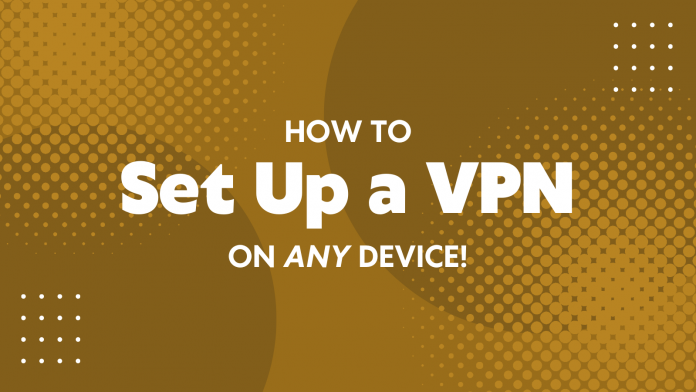 In general, there are 2 ways to set up a VPN. You can opt for a VPN app, which means you’ll be running your VPN’s native software on your device (like running any other application). That’s the easiest way to get started, letting you take full advantage of your VPN’s protocols, encryption, server network, individual features, and more.

However, you can also configure a VPN manually, which is possible on most devices (on computers, smartphones, and tablets, primarily). You should pick that route if you have some prior experience using VPNs. The same applies to installing a VPN on a router, which is a bit complex procedure but allows you to protect your entire household at once.

Therefore, you have plenty of options in front of you. Also, we understand that you might be a bit overwhelmed, so we’ll try to keep things simple.

With that said, what follows is a series of guides on setting up and installing a VPN, categorized by various types of devices and platforms. Let’s jump right in!

The big question is – which VPN should you pick? Based on our tests of 65+ VPNs, you should go for ExpressVPN. To learn more and explore additional options, visit our central guide to the best VPNs overall.

Set Up & Install a VPN on Computers

When it comes to computers, you can decide between using a native VPN app or configuring your chosen VPN manually. If you want to most straightforward route, use a VPN app. Check below for more information, based on which platform you use.

Set Up & Install a VPN on Phones & Tablets

Apple’s App Store and Google’s Play Store are filled with VPN apps. So, you can already guess how you can download and install those VPNs. However, doing that manually and even via sideloading is possible. Use the following links to learn more.

Set Up & Install a VPN on Streaming Devices

Streaming devices are powered by operating systems such as Android TV, Fire OS, tvOS, and more – most of which support VPN apps. On some devices, you can install a VPN using a ‘SmartDNS’ feature that unblocks streaming apps. Check out the following guides.

Set Up & Install a VPN on Routers

VPN-ready routers support VPNs in different forms. For example, via stock or custom firmware. Some VPNs let you install their firmware, which is typically the easiest way to get started. So, proceed based on which router brand you use, as displayed below.

If you’re just getting started, you might want to check our guide to the best VPN routers. And also, here’s how to choose a VPN router based on your needs and priorities.

Set Up & Install a VPN on Web Browsers

Keep in mind that most VPN extensions for Web browsers act as proxies. They protect your data, but they don’t bring the highest level of encryption. So, we recommend picking a native VPN app over an extension. However, we still offer guides for Web browsers, as you can see below.

Set Up & Install a VPN on Smart TVs

Most smart TVs don’t support VPN apps. However, some usable workarounds exist. You can use a ‘SmartDNS’ feature, which most of today’s top-rated VPNs offer. And if you’re a more advanced user, you can opt for installing a VPN on a router. Find more information below.

Set Up & Install a VPN on Game Consoles

Despite their tremendous processing power, game consoles don’t support VPNs. So, you have two options: installing a VPN on a router (and then connecting your console to that router) or using ‘SmartDNS’ directly on your console. Check the following guides for more info.

Set Up & Install a VPN on Kodi

Pairing Kodi with a VPN helps you access more Kodi add-ons, which means you’ll get more TV shows, movies, live TV channels, and plenty more. The following guides explain how to best use a VPN to unblock Kodi on various platforms and devices.

Aside from learning to combine Kodi with a VPN, there’s plenty more to discover about that application. An excellent place to start is our Beginner’s Guide to Kodi. Once you’re ready for more advanced topics, read our Ultimate Guide to Kodi.

Set Up & Install a VPN on NAS Devices

Network-attached storage devices make use of VPNs to secure data transfer protocols. Most NAS platforms support VPNs - but be prepared to configure them manually. Select your NAS platform below to learn more.

Are VPNs Easy to Install?

In general, VPNs are very easy to install. That especially goes for platforms that support VPNs natively, such as computers, phones, tablets, streaming devices, and more.

Some devices, like routers, require you to configure a VPN manually. That procedure isn’t overly complex but having some knowledge of how VPN connections work is needed.

What’s the Easiest Way to Set Up a VPN?

The easiest way to set up a VPN is by using its native app. That procedure requires only a few minutes of your time. No prior knowledge of VPNs is required.

How Do I Get a VPN Username and Password?

You'll receive your credentials when you sign up for a VPN service. So, as soon as you subscribe, check your inbox for additional information about your subscription.

Most VPNs will turn your email address into your username. And also, most of them will generate a strong password instead of letting you create a new one yourself.

Does a VPN Work on Home Wi-Fi?

Yes, any VPN should work just fine on any home Wi-Fi network. You’ll be able to install a VPN on your router or directly on your devices (phones, computers, etc.).

Do I Need a VPN for My Home Wi-Fi?

Yes, you need a VPN for your home Wi-Fi to secure your privacy, bypass ISP-induced throttling, unblock new types of content on the Web, and similar.

To learn more, check our guide explaining why you should use a VPN.

Can I Connect a VPN to My Router?

Yes, you’ll be able to connect a VPN to your router. More precisely, you can manually set up a VPN on your router, but only if you have a model that supports VPN connections.

Scroll up to reveal how that’s done on more than a dozen router brands. And also, you might want to learn about how VPN routers work.

Can You Create a VPN Yourself?

Yes, you can create a VPN yourself – but that doesn’t mean you should. Creating a VPN server on your own is a very expensive and time-consuming process.

To get an idea of what to expect, here’s how to set up a VPN server at home. However, know that using a commercial VPN service will always be the easiest route.

Which VPN Should I Use?

Our strong recommendation is to use ExpressVPN, which is easy to set up on practically any device. It’s also a solid pick for any possible use.

You can find more options in our guides on the best VPNs for privacy, streaming, torrenting, and gaming. Try searching for other guides on TechNadu, based on your specific needs.

So, you now know how to set up a VPN on any device. However, if you have any doubts or questions, let us know via the comments section below. Thanks for reading!