The Most Powerful Anime Characters With Fire Powers Listed 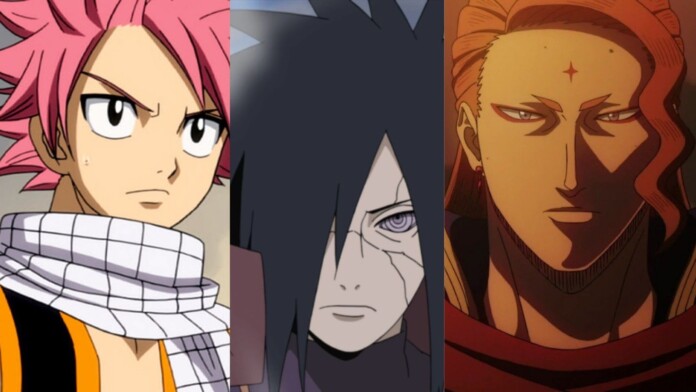 Many anime characters have fantastical elemental powers, but few are as popular or impressive as those with the power to control fire. While it's hard to really know how many of these flame-imbued badasses would fare against each other in a cross-universe smackdown, we've tried to rank our favorites according to how powerful we perceive them to be.

Known as the Flame Alchemist, Colonel Roy Mustang is a smart and seemingly arrogant member of the military. Mustang is not particularly popular with other soldiers. However, he is feared and respected. Roy's ambition knows no bounds and his ultimate goal is to become the next Fuhrer. To this end, he's a bit of a glory hound and likes to make sure everyone sees his flashy method of dealing with the enemy.

As for his powers, we've put them at the bottom of this list for a few reasons. Basically, his power is not that of fire - but alchemy. He's an absolute specialist, of course, but his reliance on gloves with special transmutation circles and his inability to attack in the rain put a literal damper on his power. That being said, when the conditions are right, Mustang is absolutely devastating, and there are no other alchemists we are shown in any of the various FMA anime that demonstrate this mastery of flame.

Natsu Dragneel's backstory is a little complicated, and really, we don't want to spoil anything for people who aren't familiar with Fairy Tail. So let's just say that he's a man transformed into a demon, raised by a dragon, and imbued with fire dragon slayer magic on a mission to slay an evil, epic dragon.

Natsu can conjure fire at will and uses it for practically everything: he can fly around on jets of flame, spit fire, and envelop his fists with flames to pack more punch. The angrier he gets, the hotter his flames burn, melting even steel with ease if he's really miffed.

Even more impressive, Natsu is immune to fire and can even eat it to recharge himself. Add to this his superhuman strength and ability to unlock other types of magic and forms, and it's obvious why he should be on this list.

Founder of the Uchiha clan, Madara is one of the strongest ninja in history - an almost mythical figure in the world of Naruto. Just the possibility that Madara had returned to life triggered the ninja equivalent of a world war.

Like most ninja, Madara has a long list of abilities and techniques at his disposal. However, the Uchiha clan as a whole has an affinity for fire and despite being able to use all nature transformations, Madara is clearly biased towards fire. With the ability to create fire attacks and barriers with a massive area of effect, no one in his own clan or outside it can use fire for offense or defense to the same degree.

As a third-generation, Shinra can ignite fire around his feet and use them to fly and accelerate himself. His kicks are incredibly powerful. He's resistant to fire himself and can move at the speed of a jet but with more agility. While already an elite and powerful fire soldier at the point we meet him in the series, Shinra develops even more formidable powers over the course of the show, but we don't want to post spoilers here, so be sure to catch Fire Force!

6. Shizue Izawa - That Time I Was Reincarnated as a Slime

Watch on Crunchyroll, Netflix, and Funimation.

Shizue was transported from Japan to another world while her village was being firebombed. Burned by the flames, the demon lord who summoned her bound the primal fire spirit Ifrit to her. This gives Shizue devastating fire powers, but Ifrit doesn't rest easy within her. While her lifespan has been dramatically and unnaturally extended, Shizue fights a daily battle against the fire spirit that resents being trapped inside her. She remains strong throughout, but Ifrit is always chipping away at her.

When it comes to the power of her fire, there's no one we see in the show so far who can really withstand her - apart from demon lords and the main character, that is. Everything else is barbeque if Shizue wills it.

Mareoleona is n acting captain for the Crimson Lion and the Royal Knights squad. Both divisions of Magic Knights. She's the sister of Fuegoleon Vermillion, another formidable fire user we'll talk about shortly.

Mareoleona has a personality that's just as fiery as her magic and the literal firepower to back it up. She takes no nonsense, has a short temper, but is also fiercely loyal and always willing to help others become stronger. Apart from having insane flame powers, she has superhuman strength and speed. Her toughness and no-holds-barred battle style make her one of the most powerful fire users ever to grace the screen of any anime.

Captain of the Crimson Lions and first son of House Vermillion, Fuegoleon is Mereoleona's elder brother. Both he and his sister have a strong sense of loyalty and honor, but unlike his sister, Fuegoleon is even-tempered and more fair-minded. He's well-liked and respected rather than feared.

In terms of his fire powers, there's basic and pure fire magic - which is devastating enough. However, he can also combine creation magic with fire magic to make objects and even creatures such as an animated lion. One of his most impressive powers is the ability to summon Salamander, a spirit of fire.

Enji Todoroki, known by his superhero name Endeavour, is the second-ranked pro hero from the ultra-popular anime My Hero Academia. A prideful and ambitious man, the rank of second-best has never fit him well. After trying and failing to become number one for most of his life, his personality has ironically become rather cold.

Enji's Quirk is Hellflame, and it deserves its name. His ability to create and manipulate fire is unparalleled. On top of this, he also possesses insane levels of physical strength and durability. Perhaps more impressive than his insane battle prowess is his high IQ. His abilities as a world-class detective are what actually give him power as a hero, but that indomitable blaze can't be ignored!

2. Rimuru Tempest - That Time I Was Reincarnated as a Slime

Watch on Crunchyroll, Netflix, and Funimation.

After being reincarnated as a cute little slime in a fantasy world, Rimuru starts to acquire ridiculously overpowered abilities at a fast pace. We can already easily rank him above Shizue in terms of raw overall power since the two actually go toe-to-toe in the show, but what actually puts him up so high is his Black Flame.

This ability lets the user convert their internal magic directly into fire. How hot, powerful, and immense the Black Flame is reflects how much internal magic the user has. In Rimuru's case, he's like a nuclear reactor of "magicules" filled with dense magic, so his Black Flame is particularly terrifying. This fire of pure magic burns through anything and can't be put out by normal means. Even if you're an apex demon lord in Rimuru's world, you probably shouldn't take Black Flame lightly.

Perhaps with the exception of Dragon Ball Z, Bleach is one of the most over-the-top anime when it comes to characters showing off extreme levels of power. Even among the powerhouses of Bleach, Genryusai Yamamoto is an absolute monster.

With 2,000 years of combat experience under the belt and the most powerful sword in all of Soul Society, you better hope you stay on his good side. He has little to no mercy and flame powers that can burn you out of existence.

His presence is so overwhelming that he can induce fear and panic in other captains and paralyze the average reaper death god with just a glance. He's an apex wielder of flame!