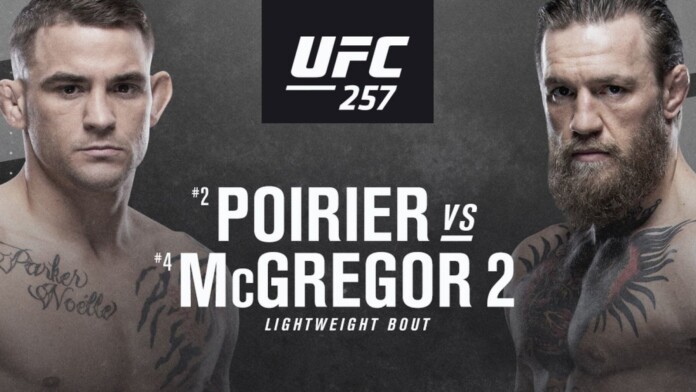 We're finally getting a rematch between Dustin Poirier and Conor McGregor, a rematch in the making for over six years. UFC 257 will put the two together in the fighting ring in a lightweight bout.

Conor McGregor has certainly had his ups and downs, retiring, then coming back, then retiring again, then making another comeback. Even now, he's under investigation after being detained in mid-September after allegations of attempted sexual assault. Nonetheless, it looks like he's going head to head with Dustin Poirier.

The two fought back in September 2014, with the event ending after 1 minute and 46 seconds with a TKO for McGregor.

Conor McGregor is facing Dustin Poirier for the second time on January 23rd. This PPV event will include prelims and early prelims, which will be available to watch on ESPN and ESPN+. The main event, however, is only available on ESPN+ with PPV.

Watching UFC 257 is going to be fairly easy to do, as you'll need to purchase the PPV event. In order to buy UFC 257, you need to have a subscription to ESPN+. If you're already subscribed to ESPN+, you can pay $69.99 for the fight alone.

However, if you want to get both ESPN+ for a full year and UFC 257, you'll have to pay $89.98 for the whole thing. Considering the fact that the ESPN+ annual subscription goes for $59.99, that's quite a steal.

ESPN+ allows people to watch exclusive events like UFC 257 Poirier vs. McGregor, read original articles, and plenty more. Access to the ESPN+ content is done via the regular ESPN app, which means you can download it on iOS and Android smartphones and tablets, Apple TV, Android TV, Fire TV, Chromecast, and loads more.

When it comes to watching the prelims and early prelims, you can also enjoy them on ESPN - and you can watch ESPN through a bunch of live TV services.

fuboTV is a good example, especially since this is a service that specifically caters to sports lovers with a ton of dedicated networks. ESPN is part of the main bundle, but you can go for one of the pre-made plans where you'll find extra channel packs and premium networks at discount prices. Start your free trial on fuboTV now!

Hulu is also an option. It includes ESPN in the main bundle and you can add extra channel packs and premium networks to your account if you so desire. The coolest thing is that by subscribing to the live TV service, you'll get the On-Demand service, so you have two platforms. Start your free trial on Hulu!

ESPN is part of two of the bundles on Sling TV, namely Orange and Orange + Blue. You'll get a single stream to watch the fight with the Orange bundle, but the Orange + Blue bundle offers four simultaneous streams. You can also add loads of extra channel packs and premium networks, customizing the service to suit your needs. Start your subscription with Sling TV!

How to Watch UFC 257 Poirier vs. McGregor 2 on Android?

If you have an Android device (both smartphones and tablets), you can head over to the Play Store and get the ESPN app. Once installed, you need to log in with your ESPN+ account.

You need to tune in once UFC 257 starts. You can also purchase the event from the app if you haven't already.

If you want to watch the fight between Poirier and McGregor on iOS devices – whether on tablets or smartphones – you have to install the ESPN app in the App Store. Once there, you need to log in to your ESPN+ account.

You can get UFC 257 from the website, but you can also do it from the app directly.

If you have a Roku, you can enjoy the next UFC PPV event easily. All you're going to have to do is get the ESPN app for your Roku and then log into your ESPN+ account. Head over to the app at the right time, and start streaming the fights.

Keep in mind that it's possible to purchase the event from the app.

If you have a Fire TV or a Fire Stick, you can watch the next UFC event. Make sure the Fire TV stick is plugged in, look for the ESPN app, and have it installed. Then, launch the app and sign in to your ESPN+ account.

Make sure you activate the account and then tune in at the right time to watch the PPV event. You can purchase UFC 257 from the app if you haven’t yet.

What Are the Bettings Odds for Poirier vs. McGregor 2?

While it's true that McGregor defeated Poirier back in 2014, it's been a few years since then, and both have grown since. Bovada places McGregor at -305 ods, while Poirier has +235 odds right now. Of course, this can change a bit before the fight on January 23rd, but it will likely stay in the same range.