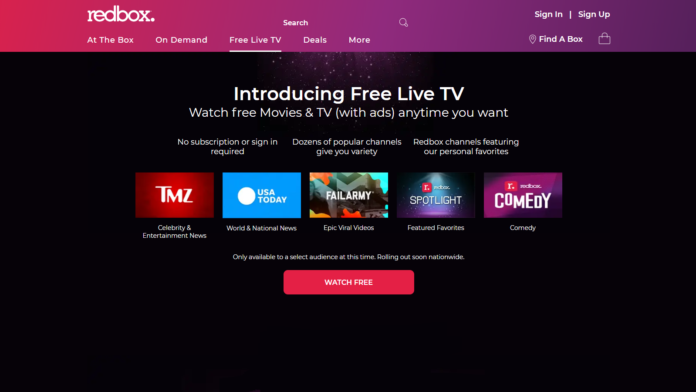 Redbox is the latest player to enter the over-crowded streaming services market. To differentiate themselves from the rest, they are betting on an ad-supported business model instead of requesting users to pay for subscriptions. Although the service has launched for field testing at this moment, it has already got a section on the Redbox website, an Android, and an iOS app. This type of streaming platforms are getting increasingly important, as the majority of the competition requires subscriptions, and people are fed up with the constant hopping they need to do.

Redbox started in 2002 as a DVD rental service in the United States, specializing in rentals via automated kiosks. By 2016, they had captured more than half of the physical rental market share in the country, as they had deployed tens of thousands of kiosks in convenience stores, fast-food restaurants, pharmacies, grocery stores, retail stores, and more. In January 2018, Disney sued Redbox over copyright violations, and the latter accused the former of unfair play. So, after getting pressed and seeing the market gradually shrinking, Redbox thought it would be a good idea to jump to the streaming business.

By releasing the “Free Live TV” service, Redbox hopes to capture the audience that would like to consume content and won’t mind getting served an ad or two. There’s no sign-in required, and users can easily search and watch movies or TV channels. The platform offers dozens of 24/7 channels, both Redbox-themed and some belonging to news partners like “TMZ” and “USA Today”. “Film Rise” and “The Pet Collective” are also there, while there are also channels that are curated compilations of content that is already available online. The user interface is quite friendly and comfortable, but the free content selection, in general, isn’t exactly rich at this moment, to be honest.

For those who want something more, they can still rent titles right from inside the app and still without having to sign-in. Users may rent movies by paying $1.99 for each title. Of course, the ads will only be present on the free TV channels, and not on these movie rentals. The new service currently supports Windows, macOS, Chrome OS, Android, and iOS. As for the devices, TVs running Android or WebOS are supported, and so are Chromecasts, Roku sticks, and Apple TV boxes. If you’re having trouble accessing the website or the service from your location, you can try using one of the VPN tools that we present on this article, pick a US-based server, and you should be able to proceed without a problem.