Can You Watch Attack on Titan Legally in India? 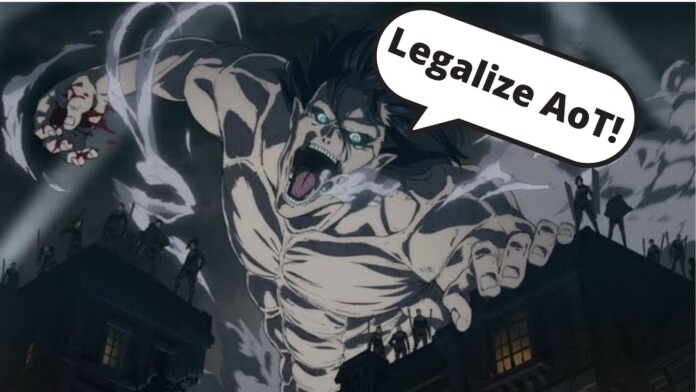 Ever since its first season hit television screens all over the world, Attack on Titan (Shingeki no Kyojin) has been a red-hot smash hit with fans. Set in a dystopian world where humans have retreated behind giant walls, the titular titans that they hide from are creepy and awesome all at once. Add to that the absolutely stunning animation and combat sequences, fantastic story twists, and beautiful world design and it’s no surprise AOT is one of the best-selling manga and most popular anime of all time.

With the grand finale and the final season about to end the 8-year-long run of the show, fans all around the world are desperate to see the final chapter of the story. However, if you live in India, can you legally watch all the seasons of Attack on Titan online?

The answer to this question, first of all, depends on what it means to legally watch an anime. You see, media such as TV series or films have rights attached to them. The program creators have the sole rights to it – the rights to broadcast, sell, or otherwise distribute their intellectual property, and they can then sell those rights to different entities. So, for example, a television channel in your country might pay to have exclusive rights to show something within that region. That’s what is meant when someone says an anime has been “licensed” for broadcast or distribution somewhere.

This is important to remember for a little later in this article because once the primary rights holder for a program licenses it out to someone in a particular region, even they themselves give up their rights to air the program there. At least for as long as the license agreement term is valid, after which it reverts back to the original owner.

So, for our purposes here, watching Attack on Titan “legally” means paying the official license holder for the show in your region. Even without money, it involves watching the program with their consent. Which is all good and well, but what if there is no licensed distributor in your country?

Who Has the Attack on Titan Licence in India?

That’s a good question, and it’s exactly what we tried to find out. As far as we can tell, no one has the license. At least, there doesn’t seem to be any public indication that someone is even negotiating for it. With the exception of Netflix, there aren’t really any streaming services in India that license anime. However, this is the age of the internet.

If the show isn’t licensed officially in India, why not simply bypass the geographical restrictions? Then watch it using an international service?

What About Using a VPN to Watch Attack on Titan in India?

That’s exactly what a lot of people are doing. One fairly easy solution to this problem is to use a VPN service such as ExpressVPN, the top best VPN in the market right now. Then fool streaming services such as Crunchyroll and Funimation into thinking you are in a licensed region for Attack on Titan.

You may even find a way to pay for the service, so it certainly feels like the right thing to do – a “more legal” way of going about things. The truth, however, is that this still isn’t legal. Yes, there’s a good argument to be made that the regional licensing approach doesn’t make a lot of sense in a world where the internet makes borders even more imaginary. However, there’s an entrenched system of media companies in each country with an iron grip on the local market.

It took Netflix years and an insane amount of negotiation to spread outside of the USA. The truth is that anime studios and their distributers don’t have that sort of clout. And gaining international reach is hard.

You can also rationalize the situation by arguing that since there are no license holders in your country and your money is going to the original creators, no one is really hurt or aggrieved here. The thing is, we’re not talking about morally-sound solutions here, but legal ones. If we stick to what’s legal, then there doesn’t seem to be a way to watch AoT in India. That’s true for many other shows as well. With India seeming like a very large blind spot for distributors who handle streaming and BluRay sales in Southeast Asia. As well as Asia in general.

The Only Answer Is Demand

Globally anime has grown into a multi-billion dollar industry, and it’s clear that a substantial Indian audience wants this content. The problem is that local distributors may not see it clearly – which means, therefore, they aren’t interested in pursuing the legal and logistical tangle. The trial of getting rights to a program they aren’t sure will sell.

The official presence of Netflix in India, which does come with a decent selection of licensed anime, may also make other local distributors feel like it’s not worth competing. After all, Netflix has fought hard to get the rights to legendary shows – we can take programs such as Neon Genesis Evangelion as an example. They have paid for the production of numerous original anime.

Which brings up another important question: why doesn’t Netflix bring AoT to Indian audiences? It does seem to be the one company for whom it makes the most sense. They also have the clout to do it. It’s not just us that think so. At the time of writing, over 55,000 people have signed a petition asking Netflix India to license and stream the show, providing a legal avenue for Indian anime fans to experience this iconic show without having to break the law and jump through a million hoops.

Thanks to the internet, people all over the world can mingle and discuss their fandoms with ease, which is why it’s so frustrating when, for example, US citizens watch shows such as WandaVision or the Mandalorian and the rest of the world can’t.

Despite most people being willing to pay, the rights holders don’t offer a legal option to do so, leading to massive piracy and VPN-based block evasion. By the time the show is available in those territories, months or years later, the most ardent fans have already seen it.

Thankfully, we are starting to see global releases, such as with Zack Snyder’s Justice League. That movie is an HBO Max exclusive, but they made sure it would be available legally in places where HBO Max isn’t selling subscriptions. The anime industry needs that approach for India, which remains a massive untapped market for the medium.