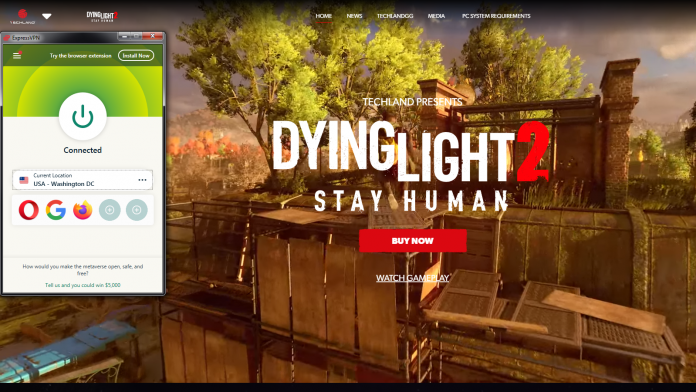 Before Techland announced their co-op patch for Dying Light 2, people had been complaining about lag and other connectivity issues. Now, the patch seems to have resolved a great deal of the problems with the game's multiplayer. However, a quick look online reveals that there are still players reporting lag and disconnects in co-op. The best way to solve these issues is by using a decent gaming VPN to reroute your Dying Light 2 traffic.

Doing so lets you avoid faulty network nodes that could increase your ping. Or worse, it does not let you connect with friends at all (usually due to NAT type conflicts). Not only that, but a VPN will help you prevent bandwidth throttling from your Internet provider. No more annoying slowdowns mid-game or while streaming geo-blocked content on Netflix, BBC iPlayer, and other platforms.

Best of all, you can evade pesky firewalls on campus Wi-Fi, at work, at hotels, and at other public hotspots that block Steam and other gaming services. Adventure through (yet another) zombie apocalypse without worrying about any blocks getting in the way of your fun.

Based on dozens of hours of researching all the different gaming VPNs out there, these are the 5 best VPNs for Dying Light 2.

All ExpressVPN servers are RAM-based, making it less likely for a government seizure or rogue employee to put your data at risk. Couple that with their strict zero-logs policy, impenetrable leak protection, and built-in kill switch, and you have a highly secure VPN package that's hard to beat. They've also introduced a new feature called Threat Manager (currently only for iOS, Mac, and Linux), a DNS-based blocker that filters malicious websites and trackers looking to harvest your data.

ExpressVPN's impressive network spans nearly a hundred countries around the world. This makes it easy to find a lightning-fast server close to your friends (or vice-versa), so you can play a lag-free co-op in Dying Light 2: Stay Human. And thanks to their new and improved Lightway protocol, you get top-notch security with better overall performance (especially when compared to OpenVPN).

If your connection isn't the best, ExpressVPN helps out with a useful split tunneling feature. Say you're playing Dying Light 2 online and downloading something in the background or listening to a podcast or watching Netflix on the side. Split tunneling lets you focus all VPN resources strictly on Dying Light 2 and let your ISP's servers handle all the side traffic - thus boosting your in-game network speeds.

Read our ExpressVPN review to learn more about what makes this the #1 provider on our list.

The provider's powerful encryption is enhanced with airtight leak protection, a kill switch, and a no-logs policy that underwent multiple successful security audits. Needless to say, you don't need to worry about your data security while playing Dying Light 2, whether it's at home or on unsecured public Wi-Fi.

Now, nothing is more immersion-breaking than a lag in a co-op game. Imagine your characters bouncing around all over the place because of latency or enemies spawning on top of you. Just the worst, especially in a serious setting like a zombie apocalypse. Thankfully, NordVPN's high-performance servers and advanced NordLynx protocol offer peak security without sacrificing speed.

Still need to shave off a few ms off your ping in Dying Light 2? Then you can always use NordVPN's built-in split-tunneling to exclude apps from the VPN tunnel. Outside the game, NordVPN lets you block pesky ads and dangerous websites with the help of Threat Protection (available on Windows and Mac). Not a staple VPN feature, but definitely welcome considering the myriad of online threats nowadays.

Learn more about the provider's other important features in our NordVPN review.

CyberGhost VPN comes equipped with all the industry-standard VPN features we've come to expect. These include impenetrable encryption, a no-nonsense no-logs policy, an always-on kill switch, and even a built-in blocker that filters malware and phishing domains, as well as malvertising.

With over 7,000+ servers in 90+ countries, there's no doubt about CyberGhost VPN's ability to offer a lag-free co-op experience in Dying Light 2. Their blazing fast, RAM-based network also features servers optimized for online gaming. Just click on the option in the app, choose from a multitude of countries, and enjoy playing with friends from all around the world.

As before, CyberGhost VPN lets you exclude apps from the VPN tunnel with their split tunneling feature. Pretty useful in case you have other stuff running in the background (Netflix, Discord, Spotify, etc.) and need a slight speed boost.

Check out our CyberGhost VPN review to learn more about the provider, our speed tests, and other relevant info.

4. Private Internet Access (PIA) - Huge Server Network in the US

PIA features everything you need from a VPN, from top-notch encryption and a kill switch to fast, RAM-based servers. Not only that, but their no-logs policy has been verified twice in court, cementing the fact that your data is never stored on their servers. The service also has PIA MACE, an ad-blocker slash malware, and a phishing domain filter if you're worried about hackers stealing your accounts.

What makes PIA an amazing option for Dying Light 2 (especially if you're based in the US) is their huge server network. At least half of their 35,000+ servers are located stateside, making it less likely to run into server congestion issues. Expect lag-free zombie hunting with friends from across the country. Of course, PIA covers 78 countries worldwide, so it's still a great pick regardless of your location.

Private Internet Access lets you connect up to ten devices on a single subscription, which is a little more generous than our choices so far. That means you and your friends can all enjoy 4-player co-op in Dying Light 2 with a VPN while also securing your smartphones or streaming geo-blocked content on other gadgets in your home.

For more details of interest, check out our in-depth PIA review.

If PIA's ten simultaneous connections aren't enough, Surfshark goes one step beyond and lets you link an unlimited number of devices to a single account. Chip in with a few friends, and you all get to push zombies off rooftops without goofy lag-related glitches. Not to mention you can unblock all manner of streaming sites, bypass firewalls, and have more Internet freedom in general.

The provider added WireGuard to their list of available protocols, making encryption more efficient and boosting performance online. And if you're not too fond of ads or hackers trying to steal your data with phishing sites, the built-in CleanWeb feature will make short work of such nuisances.

As always, you're free to choose which games, websites, apps, or IPs use the VPN tunnel with Surfshark's "Bypasser" feature - which is essentially split tunneling. If you're one to multitask while gaming, then this should give you a slight speed boost in Dying Light 2.

Consult our Surfshark review for more info on what the provider has to offer.