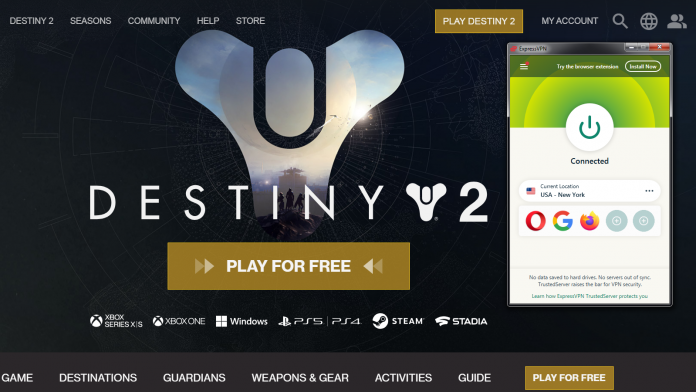 Bungie has been slowly improving the Destiny 2 player experience, at least from a security standpoint. For example, using things like SteamNetworkingSockets to prevent player IPs from leaking and falling victim to DDoS attacks. That said, there are still plenty of connectivity issues plaguing the game. The best way to solve said issues is with a capable gaming VPN that works well in both the base game and the newly released Destiny 2: The Witch Queen.

Not only can you reduce ping by re-routing your data through a more optimized network path, but you'll also avoid bandwidth throttling from your ISP. Moreover, you won't have to deal with NAT Type issues preventing you from connecting to other players (and vice-versa), being unable to hear voice chat from others and more.

Finally, a VPN will let you unblock Destiny 2 and other games on public hotspots that typically filter gaming content. Say, on-campus Wi-Fi, in your hotel room, or when you want to pass the time at an airport before your flight. No matter the time and place, a VPN lets you watch and play content you normally couldn't be able to access.

Based on our multi-year experience testing out all the different providers out there, these are the 5 best VPNs for Destiny 2:

Right off the bat, ExpressVPN is an amazing VPN choice for Destiny 2 for one simple reason. You can install ExpressVPN on a compatible VPN router and obtain its benefits on all your household gadgets. Running the VPN on your router also lets you bypass the modest five-device limit on your subscription, so that's a plus.

Whether you're playing Destiny 2 on your Windows PC, PlayStation, or Xbox, ExpressVPN offers a lag-free gaming experience on its high-performance, 94-country-wide server network. The provider has also implemented the Lightway encryption protocol, a less resource-heavy alternative to OpenVPN configs that still offers equivalent levels of security. You also get strong protection from all manner of leaks that could expose your IP to hackers, as well as a strict zero-logs policy to ensure your data is never stored on the ExpressVPN servers.

A useful split tunneling feature is included in the app, which allows you to "whitelist" certain applications that you don't want using the VPN connection. Let your ISP's servers do the heavy lifting on downloading large files, listening to music on Spotify, and other activities while you play Destiny 2 through a secure VPN server.

Head over to our in-depth ExpressVPN review, where we cover all their features in more detail.

We can all agree that speed is essential when it comes to online games like Destiny 2. Thankfully, NordVPN has consistently fast speeds, enough to win them the #1 spot on the AV-test speed tests. And by a wide margin, no less. Couple their lightning-fast RAM-based servers with the new and improved NordLynx protocol, and you got yourself a smooth VPN experience for Destiny 2.

Naturally, the VPN comes equipped with split tunneling if you need some extra speed. You can easily set it up so only Destiny 2 traffic goes through the VPN tunnel, leaving all the grunt work to your ISP instead. For an extra fee, NordVPN also provides dedicated static IP's in the United States, United Kingdom, Netherlands, France, and Germany. Useful if you don't want to share the same IP as thousands of other players and reduce the chances of getting IP-banned.

When you're not PvP-ing or running Vow of the Disciple, NordVPN secures your browsing activity from phishing and malware domains with the help of the new Threat Protection feature. It also blocks annoying (and potentially unsafe) ads, which is always a welcome addition. Last but not least, the option scans files of up to 20 MB for malware and doesn't require being connected to the VPN to run.

Check out more of what the provider has to offer in our complete NordVPN review.

With over 7,000 fast servers present in 90+ countries, CyberGhost VPN is a great choice for Destiny 2, no matter where you're located. Enjoy secure and lag-free PvP with your friends across the pond, thanks to their gaming-optimized servers that you can choose from the app itself. Once again, split tunneling is included if you need that extra speed boost.

CyberGhost VPN also has a built-in ad-blocker, although it's more focused on malvertising rather than being a catch-all filter for annoying ads. Still, better than leaving you exposed to such dangers whenever you're browsing the web. And if you don't feel like sharing an IP with hundreds of other players, feel free to sign up for one of their dedicated IPs and avoid getting blacklisted for someone else's bad behavior.

CyberGhost VPN comes with the most generous money-back guarantee, allowing you 45 days to try out their service while playing Destiny 2, Apex Legends, Lost Ark, and other online games. No better way to see why they're worth a shot than testing out the app yourself, after all.

Take a look at our CyberGhost VPN review for more details of interest about the service.

A good 26% of Destiny 2 players are located stateside, so it makes sense to get a VPN with a large server network in the area. More than half of the PIA network is located in the US, meaning you'll always find a fast local server to play lag-free matches in Destiny 2. Of course, the rest of the provider's global network is nothing to scoff at, either.

A PIA subscription unlocks the Smart DNS option, which you can use to change your location on PlayStation and Xbox if you so desire. Especially useful if, for example, you live on the East Coast and are having trouble connecting with friends on the West Coast. And as with NordVPN and CyberGhost, PIA lets you obtain a dedicated IP address for an extra fee.

The app also comes with PIA MACE, which blocks annoying advertising and filters malicious websites. Not exactly a staple VPN feature, but more security and fewer ads never hurt anybody. Well, except maybe the ad networks trying to make a profit by tracking you online.

See our PIA review to learn more about what Private Internet Access has in store.

The provider has all the security aspects you'd hope to see in a VPN: powerful encryption, strong leak protection, a no-nonsense no-logs policy, the works. You can also set up Smart DNS on PlayStation and Xbox if you prefer Destiny 2 on consoles. As a side note, Smart DNS also works on Apple TV if you're interested in unblocking content from abroad.

Surfshark has implemented WireGuard as well, so look forward to smoother performance across the board. And, as we've come to expect from any top-notch Destiny 2 VPN, Surfshark has split tunneling in place for when you need to shave a few ms off your ping. Meanwhile, their CleanWeb feature blocks ads and malicious domains, keeping your accounts safe from phishing and other dangers.

What really makes Surfshark a great pick is a fact that it lets you link unlimited devices to a single subscription. It's an excellent option for sharing with friends and family or gamers with many gadgets lying around. Chip in and have fun with your clan buddies in Destiny 2, unblock geo-restricted content on Netflix, secure your smartphones on public Wi-Fi, and much more.

As always, our Surfshark review covers everything else you need to know about the provider.

Will I Get Banned for Using a VPN to Play Destiny 2?

"You agree that you will not use IP proxying or other methods to disguise the place of your residence, whether to circumvent geographical restrictions on game content, to order or purchase at pricing not applicable to your geography, or for any other purpose. If you do this, Valve may terminate your access to your Account."

While that may sound like Steam goes around banning absolutely everyone who uses a VPN, you needn't worry about that. As long as you don't use a VPN to get cheaper prices on Steam, you shouldn't run into any trouble. Valve understands the need to use a VPN to protect your data and privacy (especially if you're a streamer) and won't ban people for it.

If you're still worried about your account, you can always install a VPN on your router to better avoid detection. That way you can also use a VPN in Destiny 2 on PlayStation, Xbox, and Stadia.

What Is the Best VPN Location for Destiny 2?

Destiny 2 uses a hybrid of client-server and P2P technology, with servers located all around the world. Things likely won't change until Destiny 3, as that would require redoing the entire netcode for the game.

Since these hybrid servers are located worldwide, the best VPN location for Destiny 2 would have to be one closest to your physical location. The less distance your data has to travel, the better the overall performance.

Of course, that's not always the case. Sometimes connecting to a location closer to your friends yields better results, especially if your connection is better than theirs. And with the way matchmaking works, you'll likely end up matched with other players in the region, resulting in less lag overall.

Should I Use a Free VPN to Play Destiny 2?

You could, but free VPNs are a bad choice for gaming, especially for Destiny 2. How so? Well, it's basically due to poor performance, the small number of servers (which can lead to congestion), as well as bandwidth throttling. Not only that but the dangers of free VPNs are well documented and far outweigh any potential benefits.

Game consoles don't support VPN apps by default. However, you can set up a VPN on a compatible router instead (check out our guide). That way, every device that connects to the router will have its traffic routed through the VPN tunnel, including your PlayStation, Xbox, or Stadia.

Now that Destiny 2 supports crossplay, you can easily play with friends across any platform, and improve the in-game matchmaking by changing your location with a VPN.

Can a VPN Fix Error Codes BEE, FLY, and LION in Destiny 2?

Destiny 2 error codes BEE, FLY, and LION occur due to packet loss or disconnects between your network and Bungie's servers. This usually happens due to one or more faulty network nodes on the path your data takes towards its destination. It's basically just your data getting "stuck in traffic".

Fortunately, playing Destiny 2 with a VPN allows your data to take a different path and avoid the issue altogether. You may need to test a few different VPN servers until you find the right one for the job. We recommend trying out ExpressVPN, as they have 3,000+ powerful servers in 94 different countries.

Does Using a VPN Fix Error Code WEASEL in Destiny 2?

Error code WEASEL is one of the more infamous Destiny 2 network errors in the community (launch day, anyone?) While the error code is likely caused by an unstable Wi-Fi connection and similar network issues, it may be worth a shot to connect to a VPN and see if things improve.

Some users have reported getting error code WEASEL, and using a VPN seemed to be the only solution that works.