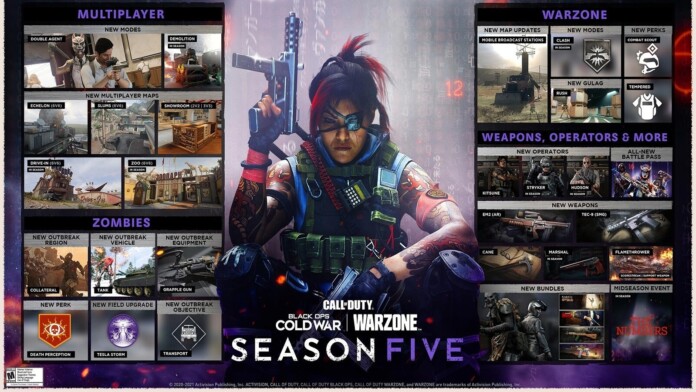 We understand how frustrating it is to battle through 150 players in Warzone only to lose your connection when you’re on a rampage to take out the last opponent. Not only that, even if you’re landing in Gulag due to lag and a slow network, it’s time to get the best VPN for CoD: Warzone.

A Warzone VPN will ensure a high-speed connection with low latency and minimal ping. It will also help you override the Skill Based Match-Making (SBMM) algorithm to get into easier lobbies. Plus, you even have an uninterrupted gaming experience during any DDoS attack or hacker’s activity. Hence, you can root for an easy win with a VPN while enjoying full-fledged privacy and security.

The best part is that when you choose a CoD: Warzone VPN, it automatically allows you to have the same benefits on Call of Duty: Mobile and other versions, so you can now seamlessly play Call of Duty on the go.

We’ve tested all famous VPN services and found these five providers are supporting the Warzone players worldwide. So without further ado, here we present you the list of best VPNs to play CoD: Warzone.

The top VPN service provider on our list is ExpressVPN. They have one of the largest server networks covering 94 countries. All servers are advanced enough to provide you with consistent low ping and stable latency, so you get an ultra-fast speed to have the edge over your opponent. If video games are blocked in your region, you can easily find the nearest country where CoD is not blocked and where this VPN has a server.

ExpressVPN is supported on routers to help you play Warzone on consoles. Moreover, they offer a dedicated MediaStreamer service to set up the VPN on PlayStation and Xbox. Hence, if you don’t want to use ExpressVPN directly on your router, use this SmartDNS technology to spoof your virtual location through MediaStreamer. However, it doesn’t provide all VPN benefits and restricts you from choosing any specific server location. So, if you want complete protection for your devices, set up the VPN on your router.

Along with such fantastic features, ExpressVPN uses the AES-256 bit key for encryption. This high-end encryption hides your complete online activity no matter what network you’re using. Each client app’s built-in speed test tool helps you test the servers individually. This way, you can find out the fastest one and connect to it in no time. You can manually choose any of their fast and secured protocols, e.g., Lightway, IKEv2, OpenVPN, and L2TP/IPsec, or leave it on the app to pick a protocol automatically based on your network settings.

ExpressVPN offers a total of 30 days to try their services and, if not satisfied, get a refund. Check our detailed ExpressVPN review to find out more.

If you are a high-profile CoD player and want a stable kill/death ratio for every match you play to push your rank, NorVPN is the best choice for you. With their super-fast obfuscated servers in 60 countries, NordVPN gives you access to region-blocked content on CoD, so you get to enrich your gunsmith with new camos, unique attachments, or totally different weapons blueprints that are not yet available to other players from your region.

You probably know that the game servers remain busiest in the evening. So if you’re playing from the US, with this VPN, you can connect to a server in a country where it’s early morning or late afternoon to override the SBMM algorithm and play with amateur opponents – that’s why many players have said that NordVPN offers the best VPN locations for Warzone bot lobbies.

NordVPN uses AES 256-bit encryption and Double VPN and Onion over VPN features to completely protect your identity. Its network kill switch is a real-time saver in case of connection dropouts. In addition, all NordVPN client apps come with the CyberSec ad blocker to safeguard your connected devices. To connect to the servers, you can use one of their highly secured protocols, i.e., NordLynx, IKEv2/IPsec, and OpenVPN.

This VPN works on all famous platforms and routers, so you can play Warzone using your gaming consoles as well by installing the tool on your router. Learn more about this VPN’s features and services from our NordVPN review.

CyberGhost is one of those reputed VPN service providers that offer a global server network in 91 countries, including dedicated gaming servers in the US. These gaming servers are specially optimized to render high speed with low latency and ping required by any multiplayer game. CyberGhost has taken a plethora of security measures to make its servers entirely inaccessible to hackers, and there is a built-in NAT firewall on all the exit nodes of the servers.

Such extra security layers ensure you never lose your anonymity online and stay safe even during the heavy flux of DDoS attacks. CyberGhost offers a clean user interface on all their client apps. So if you’re setting it up on your router, you won’t face any issue finding the gaming servers as they are pre-listed by the VPN itself. Just go to the ‘Gaming-Servers’ section and choose the one with the lowest ping – that’s all you need to do to start playing Warzone with CyberGhost.

Along with all the features mentioned above, this VPN uses AES 256-bit keys for encryption and IKEv2, Wireguard, OpenVPN, and L2TP/IPsec tunneling protocols. Either switch between these protocols manually to find out what works best for you or leave it on CyberGhost to find the suitable protocol for you. CyberGhost allows seven parallel connections and works on Android, Windows, iOS, macOS, routers, etc., so you can set up a VPN connection on your router and use the VPN on your gaming console.

However, if you’re from China, you can’t avail CyberGhost VPN services. Take a peek at our CyberGhost VPN review to explore more facts about this VPN.

PIA offers the largest server network covering multiple locations in 78 countries, and it has a more extensive reach than any other VPN on this list. From bot lobbies to international lobbies, you can choose what server you want and set your Warzone location accordingly. Yes, PIA gives you complete control over the settings, so it’s an ideal choice for advanced VPN users.

This VPN uses WireGuard, OpenVPN, and IPsec protocol to connect your device with their Next-Gen servers. PIA even uses some proxy servers, i.e., Shadowsocks and SOCKS5, to add an extra protection layer to your sensitive data. You can use this VPN on Windows, macOS, Android, iOS, Linux, Firefox, Chrome, Opera, and routers. The PIA-MACE ad blocker protects all of your devices from malicious attachments, links, phishing attempts, unnecessary pop-ups, and malware.

Get started with Private Internet Access VPN and connect 10 devices simultaneously to play Call of Duty: Warzone, Mobile, Black OPS, and other versions with your siblings, using the same network. Here is our complete PIA VPN review to help you decide whether or not you should go for one of their subscription plans.

Are you traveling to one of those countries with the strictest internet censorship, like China, Israel, or the UAE? If so, you need a VPN that can completely camouflage your online identity to let you play Warzone. Here comes PrivateVPN with all the technology you need to bypass even the so-called “Great Firewall of China.” PrivateVPN has highly secured servers in 63 countries, and the number is growing every day.

With their specially optimized StealthVPN mode, you can easily access your Activision account from any network and start blowing the enemies. That means you will never be locked out of your game, no matter how strict geo-restriction is imposed in your region. That’s why you never miss out on special deals or flash deals in CoD when subscribed with PrivateVPN. However, it uses military-grade 2048-bit encryption with an AES-256 bit key for offering you maximum security whenever you’re online.

Along with that, PrivateVPN offers IPv6 leak protection and a network kill switch to ensure that your IP is masked even when you get disconnected from your VPN. It allows you to connect up to six devices simultaneously and works on Windows, macOS, Android, iOS, Linux, and routers. No matter what device you’re connecting with PrivateVPN, you can choose one of their protocols, e.g., OpenVPN (TCP/UDP), IPSec, IKEv2, and L2TP, to reach their fastest VPN servers.

However, the only downside is that PrivateVPN offers fewer servers than any other VPN on our list, so you may come across high-ping servers quite often. You can learn more about this VPN’s service offerings from our PrivateVPN review.

All of these VPNs on our list are compatible with PS4, Xbox, and other gaming consoles. Since consoles don’t support native VPN apps, first, you have to connect your Windows PC, Mac, or VPN router with the VPN and then share the connection with your gaming console to use VPN on it. If you want some dedicated VPNs to use with your PlayStation or Xbox and play other games too, check our guide on best VPNs for PlayStation, and best VPNs for Xbox. Thanks for reading!