Magic Dragon Kodi Addon – Is It Legal? Is It Safe to Install? 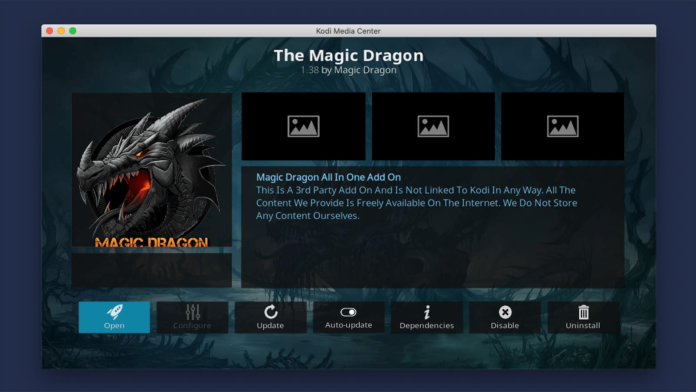 The Magic Dragon addon for Kodi comes with plenty of exciting content. However, there’s also the question of the legality of that content, which applies to many other unofficial Kodi addons. Therefore, it’s crucial to know all about the Magic Dragon Kodi addon – if you think of installing or accessing its streaming library.

Before we get started, a few useful pointers. First of all, know that this addon brings content that’s copyright-protected. Therefore, by streaming that content, you’re exposing yourself to the dangers of copyright infringement.

That’s something that you shouldn’t take lightly. And since there’s plenty of confusion regarding what’s legal and illegal about this addon, it’s time to take a more in-depth look. So, make sure to read the following content carefully, as we dive into Magic Dragon's specifics.

Is Magic Dragon Addon LEGAL to Use?

No, the Magic Dragon addon isn’t legal to use. That’s because it sources its content from piracy-related websites, so we’re talking about copyright infringement here.

Just like the majority of other hugely popular Kodi addons, Magic Dragon is an unofficial addon. Considering that Kodi’s team doesn’t review unofficial addons, this is precisely how Kodi got entangled with piracy, which is an ongoing problem.

Keep in mind that anti-piracy agencies have been ramping up their efforts lately. We’ve seen major Kodi repositories being taken down, accounts of Kodi developers suspended, in addition to prison sentences in some countries.

Is Magic Dragon Addon SAFE to Use?

No, Magic Dragon isn’t safe to use – and we strongly recommend you think twice before installing this addon. Here’s why.

There’s a very good reason why Kodi’s team has been warning about malware for a long time now. That’s because the application has been battling severe types of malware, which come from unofficial addons and forks (mainly).

By using illegal addons such as Magic Dragon, you’re exposing your private data. That's why Kodi imposes limitations on installing unknown sources, preventing you from installing malicious addons (a measure that you can easily bypass, though).

As a solution to this problem, you can subscribe to a VPN service. These tools help you use addons like The Magic Dragon safely, bypassing their (possible) malicious intent.

Must Read: Why Are Unofficial Addons Not Safe to Use?

Using a VPN for Kodi is more important than you might think. In their essence, these applications are designed to anonymize your Internet traffic and provide protection for your data.

In terms of Kodi, you will always battle against malicious addons and geo-restricted content. By re-routing your traffic through their servers, VPNs encrypt your data. In other words, they solve both of those problems at once, improving your experience of streaming media via Kodi.

Make sure to do your research before getting a VPN. If you want our friendly advice, we think that ExpressVPN is by far your best option right now.

What Content Can You Stream via Magic Dragon Kodi Addon?

Magic Dragon has been expanding its library over time. Today, it brings just about any type of content imaginable, which is the reason for the addon’s massive popularity.

More precisely, this addon offers movies, TV shows, cartoons, documentaries, music, sports-related content, and more. What’s even more interesting is that it comes with a rich library of 4K titles, which is something that not many legitimate streaming services offer.

There’s no doubt that Magic Dragon turns your Kodi into the ultimate streaming machine. However, it also comes with numerous downsides – many of which are severe enough to prevent you from using the addon. So, let’s talk about that.

Do We Recommend Installing Magic Dragon on Kodi?

No, we don’t recommend installing/using the Magic Dragon addon for Kodi. In fact, we strongly discourage you from even installing this addon, let alone accessing its content.

There’s no good reason to go against your country’s laws. Piracy equals copyright infringement, which is punishable by law. On top of that, malware is a real concern as well. Therefore, using Magic Dragon isn’t worth the risk.

How to Protect Yourself If You Already Use (Or Plan on Using) Magic Dragon Addon?

There’s only one way to safeguard your privacy on the Web. And yes, we’re talking about using VPN services, especially when streaming via Kodi.

To maximize your experience of using Kodi, you need a trustworthy VPN. We recommend subscribing to ExpressVPN - the best VPN for Kodi right now, based on our hands-on tests.

There are many reasons why VPNs are essential for Kodi users. Primarily, they let you hide your online traffic from anyone, including your Internet provider. And on top of that, they encrypt your online data, making you genuinely invisible on the Internet.

Good to Know: 7 Reasons Why You Must Use a VPN for Kodi

Indeed, Kodi users who rely on unofficial addons often protect themselves by VPNs. And also, they can hide their online activities from anyone. However, we do have to note that using VPNs isn’t an excuse to go against your country’s laws.

If you’re considering getting a VPN subscription, make sure to learn about the best VPNs for Kodi (based on our hands-on testing). And then, you’ll also want to know about how to set up and configure a Kodi VPN.

Magic Dragon Not Working? Check Out These Solutions!

Just like any other addon, Magic Dragon can encounter problems at times. With that said, we’d like to offer some possible solutions to resolving issues with the addon.

As this is an unofficial addon, its dependencies can often cause problems. So, it’s essential to keep Magic Dragon updated at all times, as described below.

It wouldn’t be a bad idea to update the application itself, as new updates bring essential bug fixes. So, here’s how to update Kodi.

Search for Magic Dragon in Other Repositories

Unofficial addons are typically found in more than one repository. In many cases, different repositories bring different versions of the same addon.

Therefore, we recommend doing a Google search, trying to find which repository has the latest version of Magic Dragon at the moment. Also, make sure to re-check this periodically as well.

Learn how to clear Kodi’s cache memory. This should help with resolving any technical issue with Kodi and should be done periodically.

There are plenty of reasons why this might occur. So, it would be best if you check our guide on resolving technical issues with Kodi.

Alternatively, you could use the Indigo addon for Kodi to perform automatic maintenance tasks, which could be another way to resolve this problem.

Magic Dragon’s ‘Error Code 404’ typically happens after the addon has been removed from its repository. Or, in some cases, it happens once a repository goes offline.

A possible solution is to find Magic Dragon in some other repository and install it from there. However, make sure to remove the previous installation before doing so.

And finally, let’s talk about legal alternatives to Magic Dragon. We’ve highlighted the three best picks below, but make sure to check other resources we’ve provided as well.

Want more options? We’ve done the hard work of testing a vast number of legal Kodi addons. So, make sure to check our central overview of the best Kodi addons right now.

This brings us to the end of our overview of the Magic Dragon addon. Know that we’re here in case you have any questions, so don’t forget to post your comment below. And lastly, don’t forget to share this article online. Thanks!