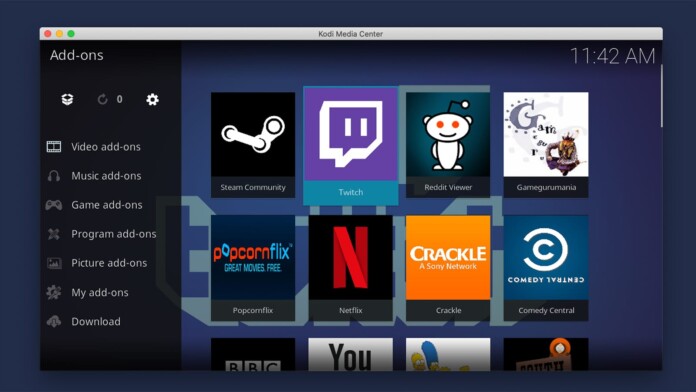 It's true that Kodi can't exactly replace a game console. However, as you'll see in our overview of the best gaming Kodi addons, this application does offer a lot. That especially goes for those who like to play retro games and don't mind using emulators.

With that said, you're in for a very interesting combination of gaming-oriented addons for Kodi. We'll show you how to play retro games using Kodi's interface, watch the latest and the hottest gaming streams, stay on top of the latest news, and more. So, let's jump right in!

Is a VPN Really a Requirement for Using Gaming Kodi Addons?

Yes, if you want to fully unblock any gaming addon for Kodi, using a VPN is a requirement.

Once you start using a VPN, it will change your IP address. That's how you'll trick Kodi's addons into thinking you're somewhere else. That means you'll access content not previously available, letting you use everything that Kodi offers.

That's actually a bigger benefit than you might realize as many Kodi addons are restricted to specific countries only. Aside from that, a VPN will help you secure your Web connection, protect your private information, and hide everything you do in Kodi.

If you want to check your options, read our guide to the best VPNs for Kodi. Then, you'll also want to know how to use a Kodi VPN.

Without any doubt, we recommend subscribing to ExpressVPN - which comes as the best VPN for Kodi available right now. If you're quick, you can even save up to 49% and ExpressVPN will give you 3 FREE MONTHS added to your subscription!

The Best-Working Gaming Kodi Addons in 2022

After plenty of rigorous hands-on testing, we present the 6 best gaming Kodi addons that are available right now:

The best way to get started with gaming on Kodi is by using ROM Collection Browser. As its name says, this addon allows you to store and organize your collection of games, and we're talking about game emulator ROMs (as you'd expect).

However, considering that this addon has been around for a long time now, it can do more than just import and run ROMs. By using this addon, you can create a nice-looking library of retro games, as it scans your ROM folders and imports games to your local Kodi database.

You'll also get descriptions, videos, and artwork, in addition to other helpful information. Then, you can sort your library by consoles, dates, genres, and publishers. All in all, this truly is one of the best Kodi addons for gaming in 2022. Try it out, and you'll see why.

You can find numerous pro-level gamers live-streaming via various platforms. However, Twitch is by far the most popular platform of this kind. It allows you to follow channels and individual streamers, watch as they play, improve your gaming skills, and more.

When it comes to the Twitch Kodi addon, you can use it to find featured streams, browse everything that's available, or search for something specific. If you decide to browse manually, the addon will show you a list of different platforms (Xbox, PlayStation, etc.), individual games, and specific types of content (live channels, clips).

Even though you won't find everything that the official Twitch website offers, the Kodi addon is fully-functional and integrates nicely with the rest of the application.

You might be wondering what YouTube is doing among the best gaming Kodi addons? Well, we can't hide the fact that YouTube is a hugely popular streaming platform – with a big emphasis on gaming.

For a long time now, it has been trying to compete with Twitch and similar platforms, ensuring that some pro-level gamers use only YouTube as their primary platform of choice.

Keep in mind that YouTube isn't the same for everyone across the entire world. Instead, it brings regionalized versions, many of which bring limited content. To learn how to unblock this platform, check out the best VPNs for YouTube.

Hearing "Kodi" and "Steam" in the same sentence sounds like a dream come true, right? However, we do have to disappoint you a bit – this addon isn't designed for playing Steam games on the world's most popular home theater software. We're not sure if that'll ever happen, but we have the next best thing.

As the name says, Steam Community allows you to dive into user-submitted content found on this platform. Once you install the addon, you'll get to access 'Steam Hubs' – which includes screenshots, artwork, on-demand videos, and video broadcasts.

That means there's plenty to watch, as there's always something new and interesting. The addon works without any issues, comes with plenty of content, and allows you to dive into gaming videos on your large-screen TV.

Next on our list of the best gaming Kodi addons, we have Reddit. The addon is called 'Reddit Viewer.' As its name implies, it allows you to check various discussions found on this website.

The trick with this addon is that instead of reading individual threads and replying via comments, you can check what other Reddit users have submitted. We're talking about media primarily, as the addon lets you watch videos, check out freshly submitted images, and similar.

Considering that the community plays a crucial role on Reddit, the addon allows you to see what's trending on the Web, and this also applies to other interests aside from gaming. As such, Reddit Viewer is a good way to find interesting stuff online.

GameGuruMania is one of the most popular gaming websites - incredibly useful if you'd like to stay on top of the latest news. Aside from reviews and news, you'll find cheats here, in addition to forums, downloads, and plenty more.

As one could expect, GameGuruMania is available as a Kodi addon as well. We're talking about a video addon here, focused on bringing videos from the website to Kodi users. Therefore, it can be very useful if you'd like to check out the latest videos as soon as they hit the Internet.

How to Find & Install Gaming Addons on Kodi?

Even if you've never interacted with Kodi before, installing addons should not be a problem. This really is a simple procedure, as explained just below.

In case you'd like to dive deeper into installing addons from Kodi's repository, make sure to use the provided link. You'll be taken to our detailed guide, with screenshots included as well.

Also, know that addons can come from other sources as well. With that said, learn how to install Kodi addons from GitHub, and you can also install them from ZIP files.

In some cases, you might encounter errors when trying to install Kodi addons focused on gaming. With that said, we've used our experience of using Kodi to offer a set of the best solutions, so you'll want to try the following.

If you need further assistance, we'd like to point you to our central guide to troubleshooting Kodi. That's where you'll find a wide range of solutions to both technical and performance issues with Kodi, helping you run the application at its best.

Which Gaming Addons for Kodi No Longer Work - Or Have Shut Down Permanently?

We've seen a number of the previously popular Kodi gaming addons disappear during the last year or so. This situation worsened after Kodi v19 was released, breaking the compatibility with many addons. With that said, the following gaming addons for Kodi are no longer available:

Many other sites are quick to recommend addons like Free ROMs Downloader and RetroMania - but we'll tell you to avoid those. Here's why.

Both Free ROMs Downloader and RetroMania are often broken and cause technical issues with Kodi. However, more importantly, they're illegal to use. That's because they tap into piracy to let you download commercially available (retro) games, free of charge.

Piracy is against the law in most countries, so using those addons should always be a reason for concern. That's why we'll once again remind you to stick to the addons recommended in this article, all of which are legal and safe to use.

Our guide to the best Kodi addons gives you over sixty recommendations - all of which are legal and safe to use. You'll also want to check the best repositories for Kodi, as well as the best Kodi skins - if you're into customizing the application's appearance.

Dear readers, that would be it – at least when it comes to the best Kodi addons for gaming. To see what else is out there, check our latest Kodi-related articles. And of course, let us know if you have any questions via the comments section below. Thanks for reading!