How to Watch Disney Plus Outside US in 2023 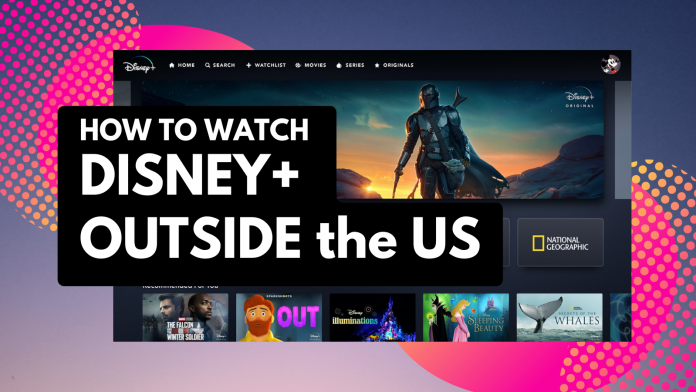 Disney Plus is among the most popular streaming services worldwide, threatening to overtake Netflix due to its explosive growth. It now has more than 150 million subscribers globally, but it's still not available in every country out there. Also, Disney Plus has country-based libraries, so you might not get the same content as everyone else. That's why you need to use a VPN to watch Disney Plus outside US - to unblock the streaming service and reach more titles.

A VPN will help you replace your IP address (pointing to your actual location) with a US IP. That's how Disney+ will think you're in the United States, allowing you to access and stream its content without limitations. However, know that Disney Plus has robust anti-VPN systems, which means very few VPNs can unblock the original (American) version of the streaming service.

On top of that, you need a streaming-friendly VPN. Since Disney+ has HD and 4K content, you'll want to stream those movies and TV shows without buffering. Therefore, a VPN that lets you watch Disney Plus outside the US should be a very capable one.

We know which VPN to recommend, so let's show you how to unblock Disney+ from anywhere. Keep reading to learn more.

Where Is Disney Plus Available?

Even though you can access Disney+ in a group of countries - many markets still don't have access to this streaming service. If you try to access the platform from a country where it's not yet available, you'll see the following message: "Sorry, Disney+ is not available in your region."

A VPN will help you change your virtual location, which means you'll get access to more movies and TV shows on Disney Plus. So, let's show you how that's done.

How to Watch Disney Plus Outside US (QUICK GUIDE)

Anyone can watch Disney Plus from anywhere by using a VPN service. Here's how you can make that happen:

If you tried accessing Disney+ before, you might need to remove your browser's cache and history. That way, Disney+ will read your new VPN location more easily, helping you unblock it while connected to a VPN server in the United States.

If you want more in-depth instructions, you'll find them here. Here's how to watch Disney Plus outside the US from anywhere - whether you're already a subscriber or not:

Option #1: Watch Disney+ Outside the US - While Traveling / If You're Subscribed

If you already have a Disney Plus subscription (the one created in the US), we'll help you access it - so that you can continue watching your favorite content. If you're already subscribed to Disney Plus and traveling abroad outside US, here's what you need to do.

1. For this purpose, you need a VPN. Go ahead and subscribe to ExpressVPN.

3. Then, select a subscription (a long-term one will help you save plenty).

4. Provide your email address and finalize signing up for ExpressVPN.

5. Once done, expect a confirmation email from ExpressVPN. So, check your inbox.

6. Now, set up ExpressVPN on your device(s).

7. Launch ExpressVPN and go through its initial setup procedure.

8. At this moment, you should be looking at ExpressVPN's home screen.

9. Click on the button below the ON/OFF switch (via ExpressVPN's UI).

10. Select 'United States' and then select any server in this country.

11. Wait until ExpressVPN's interface turns green (which means you're connected).

12. Finally, proceed to access Disney Plus on your device. That's it!

Option #2: Watch Disney+ Outside the US - If You're Not Yet Subscribed

If you're in a country where Disney Plus isn't accessible, there's still a way to subscribe. We'll show you a handy trick that works on Android and iOS/iPadOS devices, letting you subscribe and watch Disney Plus outside the US. Here's what you need to do.

1. First, you need a VPN. Go ahead and subscribe to ExpressVPN.

2. You'll be taken to ExpressVPN's website, where you need to select 'Start Your Trial Today.'

3. Pick a subscription, provide your email address, and pay for the chosen plan.

4. Once done, ExpressVPN's team will send you a confirmation email. Check your inbox.

5. Then, install ExpressVPN on your device(s).

6. Make sure your Google account or Apple ID is set to 'United States.'

7. Alternatively, you can create a new Google account or get a new Apple ID.

When creating a new Google account or a new Apple ID, first make sure to have ExpressVPN running in the background (connected to a server in the US). Then, select 'United States' as your country of residence. Also, you can use any US ZIP code and address (if you need help with that, check this online address generator).

Keep in mind that Google's sign-up form might not ask for your address or country. That's precisely the reason why you have to use ExpressVPN in the background, as Google will read your IP address instead (which should match a US IP, of course).

9. You now need to add funds to your newly created account using a gift card.

There are many sites selling gift cards, but we recommend Amazon. That's where you can find both Google Play and Apple gift cards, which can be delivered via email.

10. Once you get your gift card, here's how to redeem it on Android and iOS/iPadOS.

11. You should now have enough funds on your account for one month of Disney Plus.

12. Now, download Disney+ on your Android device, or your iPhone/iPad.

13. Don't open Disney+ yet. Instead, launch ExpressVPN on your Android or iOS device.

14. Tap the button below the ON/OFF switch to reveal more VPN servers.

15. Then, pick 'United States' and select any server in the US.

16. Once you connect, ExpressVPN's interface will turn green.

17. Now, launch Disney Plus on your smartphone or tablet.

19. Pick a subscription (you can pay per month or year) and proceed to pay.

20. That's it! You can now access Disney Plus without any restrictions.

For as long as you wish to stream Disney+, ExpressVPN must run in the background. Also, each time you want to access Disney+, you need to first connect to a US-based ExpressVPN server. That is the only requirement to unblock the media streaming service from outside the USA.

Why Do You Need a VPN to Watch Disney Plus Outside the US?

The only way to unblock Disney Plus outside the US (in any unsupported country) is by using a VPN. There is no better option out there. However, VPNs can do more, as explained below:

Of course, not every VPN is the same - and that's especially true when it comes to streaming. So, if you need help picking a VPN, check our VPN Buyer's Guide.

What's the Best VPN to Watch Disney Plus?

Based on our tests, ExpressVPN is the best VPN for Disney+. That claim comes after testing more than 65 VPN services hands-on - and yes, we tested all those VPNs with Disney+ on various devices and platforms.

ExpressVPN works on a wide range of devices. So, no matter if you watch Disney Plus on your phone, tablet, computer, or media streaming device, know that ExpressVPN will be there to support you. You also get 5 simultaneous connections, an easy-to-use interface, and access to 24/7-available customer support. Also, you can try ExpressVPN risk-free for 30 days.

In other words, ExpressVPN is ahead of its competition by far. However, if you wish to explore more options, check our guide to the best VPN for Disney Plus.

To download the Disney+ app on your device, you need to visit your device's App Store. Then, download and install the app, which is when you can launch it. Finally, log in, and you'll get full access to your country's library.

Use the table below to get our dedicated guides on how to get Disney Plus on your device, covering TVs, streaming devices, smartphones, and more.

How Much Does Disney+ Cost?

In the United States, Disney+ costs $7.99 per month. However, you can also save some money and pick its annual subscription, priced at $79.99 per year.

The table below shows you the price of Disney Plus across its biggest markets, including the UK, the European Union, Canada, and more. Take a look just below.

There's no better way to watch Disney Plus outside the US than using a VPN as capable as ExpressVPN. That's our #1 recommendation, as we guarantee that ExpressVPN will unblock the US library of Disney Plus no matter where you currently reside. On top of that, you'll get fast and stable streaming even when using a slow Web connection.

Can I Use Disney Plus at Two Different Locations?

Yes, you can use Disney Plus at two different locations - as long as you're within the limits of your subscription.

Keep in mind that each Disney+ subscription allows up to 4 streams at the same time. So, you can access the streaming service from 4 different locations simultaneously.

Yes, Disney+ is region-locked. That means each country where Disney+ is available has access to its own version of Disney's library.

Can I Use My Disney Plus Account in Another Country?

Yes, you can use your Disney Plus account in a different country - but you'll get access to the library available in that specific country only. But you will need a VPN if you want to access your country's library.

How to Pay for Disney Plus Outside US?

The easiest way to pay for Disney Plus from outside US is - via your Android phone, iPhone, or iPad.

You can buy Play Store and Apple gift cards, which you can then redeem even from outside the US (if you have a Google/Apple account associated with an address in this country).

Yes, Disney+ can detect VPN services. That's the reason why you must use a proven VPN service, such as ExpressVPN.

Can Disney Plus Ban My Account Because of a VPN?

There are no examples of someone's Disney+ account being banned because of a VPN. So, the worst that could happen is seeing an error message preventing your access while your VPN connection is active.

Is There a Free VPN for Disney Plus?

No, there are no free VPNs that can unblock Disney Plus. All free VPNs come with either limited speeds or limited bandwidth, preventing you from streaming any kind of media.

That's why we recommend going for ExpressVPN, which will never let you down. Still, if you wish to give free VPNs a go, here are the best free VPN services.

Do you have any questions about watching Disney Plus outside US? If you do, post them via the comments section below. Thanks for reading - and enjoy streaming your favorite shows and movies via Disney+!