Hawkeye on Disney Plus: Release Date, Trailer, Cast, Episodes, How to Watch 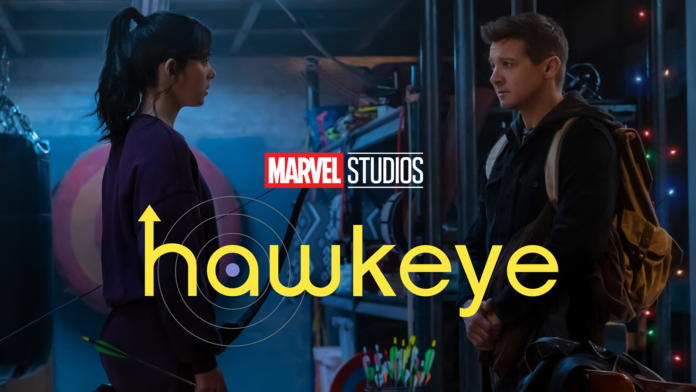 In yet another Marvel installment on Disney Plus, we'll enjoy a new superhero series launched on the platform owned by Disney Studios. This time, we get to see MCU novice Hailee Steinfeld as Kate Bishop and Jeremy Renner as Clint Barton/Hawkeye in another Marvel Studios beloved series. Let's see how to watch Hawkeye on Disney Plus, and most notably, let's find out details about the episodes.

Hawkeye will also be Marvel's first Christmas-themed Disney+ title, with the story unraveling in New York City during the winter holidays. This means we'll be hearing the bells jingle and see the snowfall between the arrows, which is quite a unique setting for Marvel fans.

"I wanted to do something different on a different platform," said Trinh Tran, Executive of Production & Development at Marvel Studios (executive producer for the two most recent Avengers films and associate producer for Civil War). "I wanted to just focus on a more personal-stake storyline set in the holidays. Because I love Christmas."

This would be the fifth Marvel series Disney+ treats us with. Considering how intense the WandaVision, The Falcon and The Winter Soldier, Loki, and What If series are, we should expect something a little lighter now but equally awesome. So we're definitely excited!

The series trailer was published a couple of months ago, and it's surely giving fighting villains a festive feeling. The trailer hints Hawkeye is compelled to put the suit back on, as the masked vigilante is back. Then, Clint Barton teams up with the young Avenger Kate Bishop, who aims at walking in his footsteps, in an action-driven comedy.

We'll also see a Broadway musical with Marvel character costumes portraying Captain America, Thor, and Loki, among others, apparently. Oh, and Clint has a hearing aid for the first time in the MCU. What else is in store?

When Does Hawkeye Take Place on the MCU Timeline?

If we look back on the other Marvel movies and series, Loki was set in the same time as the Endgame events (starts with Loki escaping from Thor and Iron Man with the Tesseract), WandaVision takes place three weeks after Thanos kills Vision, The Falcon and The Winter Soldier is set six months after Endgame, and Spider-Man: Far From Home and Eternals happen eight months after the Thanos battle.

Like most content that launches on the streaming service, Marvel's Hawkeye premieres on Disney+ on Wednesday, November 24, 2021. Kind of early for a Christmasy story, but it's understandable if we consider it's not available all at once.

Who Is in the Hawkeye Cast?

Besides Jeremy Renner, Hawkeye can only feature some of the names we love:

What Time Does Hawkeye Come Out on Disney+?

Hawkeye will land on Disney+ at 12:01 AM PT (3:01 AM ET), and every next episode will be available to stream at the same hour on Wednesdays. Watch the episodes late at night or see it the next day over coffee, it's your choice.

How Many Episodes of Hawkeye Will Be Released?

Disney+ announced the Hawkeye series will have 6 episodes. However, not all of them are going to be published at once - only the first two episodes will be made available simultaneously, and we'll be able to see the rest later on.

What Is the Hawkeye Release Schedule?

We'll be served two episodes at a time for the first week (on November 24), and then one episode will be released every Wednesday. The season finale is set to premiere on the Disney+ streaming platform on December 22, 2021.

Here is the detailed schedule:

How Long Are Hawkeye Episodes 1 and 2?

Where and How to Watch Hawkeye?

This series is another wonderful Disney Plus original content, meaning you can only watch Hawkeye on Disney+ by owning an account with the streaming platform. You can watch each episode on-demand after the time of its publishing on the platform, on all of your compatible devices, from anywhere (keep in mind the geo-blocks, though).

Can I Watch Hawkeye on Disney Plus for Free?

Good news for new and existing Verizon customers. If you're a Verizon subscriber, you're eligible for six months of free Disney Plus with select Unlimited plans, so you can watch Hawkeye on Disney+ for free. You pay $7.99/month after the free six months end (which is the standard price for a standalone Disney+ subscription on the streaming platform). Verizon also offers the Disney Bundle for Unlimited subscribers.

Unfortunately, this is the only way to watch Hawkeye on Disney Plus for free since the streaming platform does not offer a free trial on its own anymore.