The Crew Kodi Addon – Safe & Legal to Install? Here’s Why You Need to Be Very Careful! 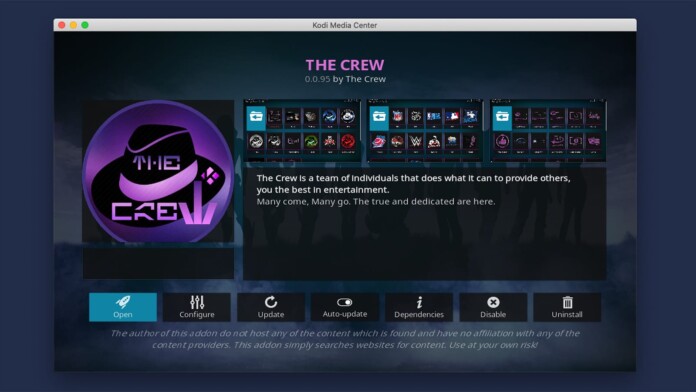 When searching for the best Kodi addons, you’ll often find The Crew Kodi addon highlighted on those lists. However, being a Kodi user, you should be aware of the numerous dangers that unofficial addons bring. With that said, know that you’ve come to the right place!

There’s no doubt that The Crew comes with an endless library of content. Still, just because it’s available online shouldn’t mean that it’s a good idea to use this addon. After all, we’re sure you’ve heard about piracy- and malware-related problems plaguing Kodi.

Well, know that The Crew is one of the reasons for Kodi’s highly problematic reputation. So, let’s talk about this addon, whether it’s legal or not, and should you install it – or stay away as far as possible.

The Crew also comes with several unique features, which is the reason for its popularity. It allows you to access so-called "1-click" movies that play without scraping for sources.

The Crew is also a gateway to other addons. These include Mad Titan, Chain Reaction, Base, and Wasteland. It’s safe to say that this one of the biggest libraries you’ll find out there.

Is The Crew Addon LEGAL to Use?

No, The Crew is definitely not legal to use.

As you can see above, this addon has a nearly endless library of content. However, all of that content is illegal to stream as it comes from illegal sources. These are typically piracy-oriented websites, torrent repositories, and illegal hosting solutions.

Essential Reading: Official vs. Unofficial Kodi Addons – Which One Should You Use?

Is The Crew Addon SAFE to Use?

No, The Crew isn’t safe to use. Let’s explain why.

This addon doesn’t come from Kodi’s official repository. This means that the application's developers have no oversight of what content The Crew serves. This is a problem not only with this addon but with the majority of other addons as well.

Learn More: Why Are Unofficial Kodi Addons Not Safe to Use?

However, aside from piracy-related worries, there’s something else to be worried about – and that would be malware. Even though The Crew has been a non-malicious addon so far, this could easily change. After all, this wouldn’t be the first time that a Kodi addon turns malicious.

Other Popular (Yet Illegal) Addons: Exodus, Exodus Redux, and The Magic Dragon.

As you can see, by using addons like The Crew, you’re not only putting yourself in danger (related to legal consequences). You’re also putting your private data in danger, which is something that owners of malicious addons can easily exploit.

Without a VPN, everything you do in Kodi is visible to third parties, including your Internet provider. Once a VPN starts encrypting your traffic, this changes as you practically become invisible and anonymous on the Web.

However, make sure to use a reliable VPN service, such as ExpressVPN. Based on our hands-on tests and multi-year experience of using VPNs, this is the best one right now.

Do We Recommend Installing The Crew on Kodi?

No, our team does not recommend installing The Crew.

When it comes to unofficial Kodi addons, there are too many risks involved. Most importantly, using addons like The Crew isn't legal in the majority of countries. With that said, our strong recommendation would be to avoid this addon and similar options.

Useful to Know: How to Use Kodi in a Legal Way? - Here's What You Must Know!

How to Protect Yourself If You’re Using (or Plan to Use) The Crew Kodi Addon?

The answer to this question is simple. If you decide to use The Crew, we recommend pairing Kodi with a VPN service. Let's explain why.

Picking a capable VPN designed for Kodi is essential. Based on our experience, the best option you have right now would be ExpressVPN.

Once you start using a VPN, you'll immediately see how this type of software improves your experience of using Kodi. First and foremost, you'll be protected against any kind of online tracking. No one will see how you use Kodi, giving you peace of mind when using The Crew.

Essential Reading: Why Are VPNs Useful for Kodi Users, Specifically?

Then, a VPN will also unblock geo-restricted content, which means that you’ll expand Kodi’s media streaming library. And even though VPNs can’t protect you against malware, they create a security layer for your private data.

There are many valid reasons why you must use a VPN for Kodi. And more importantly, VPNs aren’t only made for Kodi. They will easily find their place in your everyday computing, on pretty much any platform available.

In case you’d like to explore more, read about what VPNs are, as well as about how VPNs work. Then, turn to our list of the best VPNs for Kodi. And lastly, don’t forget to learn how to install and configure a VPN on Kodi.

The Crew Not Working? Try These Quick Fixes!

It’s not unusual for addons like The Crew to encounter technical problems from time to time. With that said, you’ll want to try the following quick fixes.

The Crew Addon Not Appearing in ‘The Crew’ Repository

This is a bug we’ve experienced several times during the last couple of months. Once you install The Crew repository, it appears that The Crew Kodi addon isn’t there. Similarly, the repository might go to a ‘disabled’ state.

There’s not a single solution to this problem. However, we’ve managed to resolve it on several occasions by reinstalling Kodi. You can learn how to update/reinstall Kodi below.

This issue happens once you click on a video, which then takes a long time to buffer. A possible solution to this problem is to use more reliable sources of content.

This is where Real-Debrid comes into play, so here's how to set it up.

The Crew Crashes on Startup / Freezes During Use

If the addon is crashing on startup or freezing during use, this means that you're probably using a faulty version. Besides, there could be a conflict between the addon and Kodi itself.

As a possible solution, we recommend updating The Crew to the latest available version. And also, you could try updating Kodi as well. You can learn more about that below.

How to Update The Crew to the Latest Available Version

Here’s how to update The Crew using the repository you’ve already installed on Kodi.

How to Make Sure Your Kodi is Up-To-Date

It’s highly important to keep Kodi up-to-date at all times. By doing so, you're making sure the latest patches are applied and that your Kodi is running at its best.

To check our in-depth guide on updating Kodi, make sure to click on the provided link.

The Best Alternatives to The Crew Addon

Lastly, let's talk about alternatives to The Crew Kodi addon. Considering the range of content this addon brings, we think you’ll find the following options to meet your needs.

Looking for more addons? Don't worry; TechNadu is here to help. You’ll want to check our overview of the 60+ best Kodi addons, all of which are legal and safe to use.

That would be all there's to know about The Crew Kodi addon. If you have any doubts, make sure to post a comment below. And also, we'd appreciate it if you could share this article online. Thanks, and enjoy using Kodi!