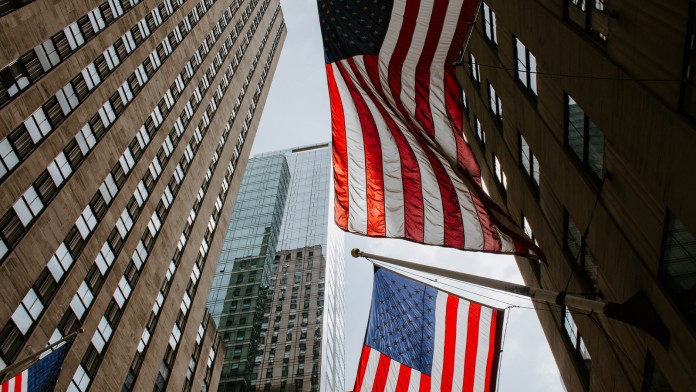 By far, the easiest way to get a US IP address is by using a VPN service. More precisely, a capable VPN service will replace your current IP address with a US-based one, forcing websites and apps to think that you come from the United States.

However, not every VPN will do the job. After testing more than 60 of those, we know which ones are your best bet. With that said, let's show you how to get an American IP while answering your questions and sharing valuable tips along the way.

How to Get a US IP Address from Anywhere

You can get a US IP address by following these 6 simple steps:

Need more detailed instructions? Don’t worry; we got you covered! Here’s our step-by-step guide explaining how to use a VPN to change your IP address.

What Is a US IP Address?

A US IP address is (just like its name implies) an IP address associated with an Internet service provider or data center originating from the United States.

Since you're looking to get a US IP address, you're probably looking to access websites or apps that are available in that country only. We are talking about public IP addresses here, which is what websites can see and read as you access them. That’s one of the ways for third-party sites to determine your location.

You might also wonder how an IP address points to a specific country? Well, know that IANA (Internet Assignment Numbers Authority) is in charge of managing IP addresses. That happens with the help of RIRs (Regional Internet Registries). One of those is called ARIN, in charge of assigning IPs across North America, handing our IPs in smaller blocks to ISPs (Internet Service Providers) in their region(s).

Why Do You Need a US IP Address?

You need a US IP if you want to access restricted websites, access new streaming services, or use US-based banking apps outside the country. Find more info just below.

Is Using a US IP Address Legal?

Yes, it’s legal to obtain and use a US IP address. That’s because using VPNs is legal as well, which means there’s nothing to be worried about.

Your IP address is a critical piece of data, identifying your device on the Web. Without it, you won't be able to do anything online. However, unless you have a static IP address assigned by your ISP (which is typically a feature paid extra), your devices get randomly assigned IPs that are also rotated from time to time.

With that said, even though your IP is a highly important piece of data, you’re not obliged to use the same IP all the time. There’s nothing illegal in changing it or even replacing it with some other country’s IP address.

Hiding and replacing your IP address isn’t an excuse to go against any country’s laws. So, even while using a randomly assigned IP that belongs to some other country, make sure not to do anything illegal in the online realm, like downloading copyrighted files, for example.

What Should I Look for in a US VPN Service?

A reliable and capable US VPN service must offer plenty of servers, fast speeds, and the ability to support your planned online activities. Here’s what else to keep in mind.

And now, let’s give you some recommendations. After testing 60+ VPNs so far, we firmly believe that these are the 3 best VPNs for getting an American IP address:

Without any doubt, ExpressVPN is among the best VPNs you’ll find today. It comes with a great set of features, and it's suitable for both beginners and advanced users. On top of that, it's a perfect choice for getting a US IP address whenever you need one.

First of all, this VPN is compatible with over 60 devices and platforms. You can use it on your computer, smartphone, tablet, media streaming device, and you can even install it on a router. Aside from that, ExpressVPN allows up to 5 simultaneous connections.

ExpressVPN delivers when it comes to performance as well. Since it comes with a range of VPN protocols, you can fine-tune your connection and reach the fastest possible speeds. There's no in-depth fine-tuning available, but you'll be happy with what's on offer.

We’ll also mention that ExpressVPN unblocks pretty much any website restricted to the US only. It works great with Netflix, Hulu, and Disney Plus, and it’s one of the best VPNs for streaming and torrenting overall.

To get more details, turn to our ExpressVPN review. We made sure to test this VPN in-depth, providing plenty of helpful information in our review.

NordVPN is an award-winning and highly reputable VPN, being available on the global market for more than a decade now. As such, it comes with a compelling set of features that seem perfect for more demanding users.

Like our other recommendations, NordVPN also offers native software for Windows, Mac, Linux, Android, iOS, and plenty more. Installing it is a piece of cake, and it shouldn't take more than a couple of minutes. You also get up to 6 simultaneous connections.

Many of those are specialized servers, which is one of NordVPN's bestselling points. We're talking about Onion over VPN, Double VPN, and Obfuscated servers here. You'll also find servers that let you access P2P networks. In other words, plenty of options overall.

Of course, NordVPN goes beyond giving you an American IP address. It unblocks a wide range of websites as it's backed up high-end VPN protocols. So, if you want to access new streaming services or wish to use your banking apps abroad, NordVPN will deliver.

We made sure to mention NordVPN’s highlights, but know that there’s plenty more to uncover. With that said, make sure to read our NordVPN review.

And finally, our list of the best US VPNs wouldn’t be complete without CyberGhost VPN. This is a highly optimized VPN solution for streaming, torrenting, and gaming. So, if you’re after any of those activities, here’s what to know about this recommendation.

First of all, know that CyberGhost VPN supports up to 7 simultaneous connections. You won’t have a problem meeting that limit as this VPN works on any device out there. Its native apps are polished and available on any platform.

Another interesting thing about CyberGhost is its server network. It has over 7,000 servers in total. However, you can get a US IP address associated with Atlanta, Chicago, Dallas, Las Vegas, Los Angeles, Miami, New York, Phoenix, San Francisco, Seattle, and Washington.

Just like our previous recommendation (NordVPN), CyberGhost also gives you an option to get a dedicated US IP address. That's gives you an even greater shot at bypassing robust anti-VPN systems from any county in the world.

However, it’s also good to keep in mind that you’ll get a range of specialized servers. Those are designed to unblock US-based streaming services, including some niche options. There are also servers optimized for torrenting and gaming (on Windows only).

The only downside to CyberGhost is its performance. Unless you’re willing to switch between protocols and try different servers manually, you’ll encounter limited speeds. Still, you can do plenty to improve that.

If you want to get this VPN a bit better, turn to your CyberGhost VPN review.

How to Change Your IP Address to a US IP Address?

You can change your IP address to a US IP address by connecting to a VPN server found in that country. Find a more detailed explanation just below.

Can I Get an IP Address from a Specific US City?

Yes, you can get an IP from a specific US city – but only if you use a VPN service that gives you that option. In other words, not all VPNs provide that possibility.

As mentioned above, our recommendations would be ExpressVPN, NordVPN, and CyberGhost VPN. All three of those have hundreds of servers in the US. And more importantly, they all allow you to connect to individual US cities.

Getting an IP from a specific US city is useful even for those currently residing in the US. That's how you can bypass sports blackouts, for example. For more info, here’s how to bypass blackouts of NBA League Pass, NFL Game Pass, NHL, and MLB.

How Do I Know If I’m Connected to a US IP Address?

You can check whether you’re connected to a US IP address by using websites that read your location based on your IP, such as DNSLeakTest.com.

Use the link we’ve provided just above and wait a couple of moments. The website will scan your IP address and show your location. Of course, if you’re connected to a VPN server in the US, it should point to that country.

To evaluate your VPN connection further and check for any leaks, we recommend using the ‘Extended Test’ button on DNSLeakTest’s website. That way, you can ensure that all your traffic is routed through US-based servers, not revealing your location at any point.

Is It Possible to Use an American IP Address to Watch Netflix?

Yes, it’s possible to use a US IP to unblock the version of Netflix available in the United States only, giving you access to more movies and TV shows.

Furthermore, any capable VPN will help you unblock other Netflix versions as well. In an instant, any of the VPNs recommended in this guide will let you access the Canadian, British, French, German, and Japanese version of Netflix.

Also, keep in mind that to watch the US version of Netflix, you really do need a powerful VPN, as that streaming service has capable anti-VPN systems. In other words, to avoid Netflix’s proxy error message, rely on a VPN such as ExpressVPN.

How Can I Get a US IP Address Without a VPN?

To get an American IP without a VPN, you can try using a proxy or Tor browser. However, those methods can be quite unreliable, especially in the long term.

When it comes to proxies, they are designed to re-route your Web traffic, similarly to how VPNs work. However, since there's no encryption involved, third parties can easily intercept your data and reveal your actual location. In other words, proxies might be helpful, but only if you want to access US-based websites with weak geo-blocks.

And when it comes to the Tor browser, it works by relaying your data through a series of nodes. So, you will change your IP address and even hide your location. Still, there's no way to pick a specific node, which happens randomly.

To learn more, here’s our guide on how to change your IP without a VPN. However, keep in mind that nothing can replace a VPN service, which remains your best option right now.

Can I Get a US IP Address for Free?

Yes, you can get a US IP address for free by using a free VPN service. Still, know that doing that can be quite risky, so let’s explain why.

Free VPN services have limited bandwidth, highly limited performance, and strict data allowances. That's what prevents you from using a free VPN for anything more than a quick Web browsing session. However, even then, you'll see that websites will block your access, as free VPNs typically use less capable protocols.

Aside from that, free VPNs can endanger your privacy by leaking your data. If you want to learn more, here’s why free VPNs aren’t safe to use. Still, if you insist on using one, make sure to consult our list of the best free VPNs available now.

That would be all on how to get a US IP address. If you have any questions, make sure to let us know via the comments section below. And finally – thank you for reading!