Seeing the “The Add-on Is Not Compatible With This Version of Kodi” Error Message? Why? 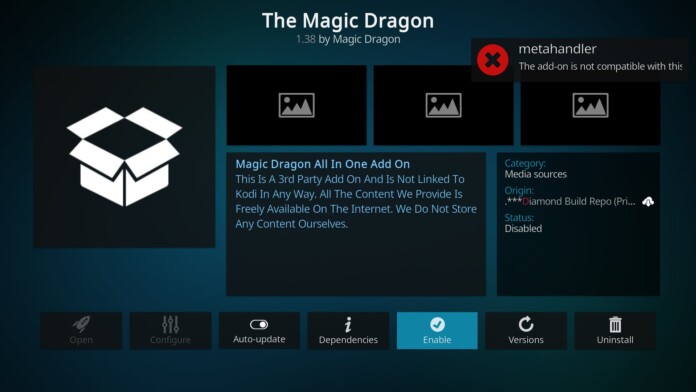 The chances are that you’ve already heard about the release of Kodi 19.0 'Matrix.' And since you’re reading this article, you’ve most probably already decided to try the all-new version of Kodi. However, you’ve been met with the 'the add-on is not compatible with this version of Kodi' error message or similar warning messages. So, what does that mean? Let’s explain!

What Does "The Add-on Is Not Compatible With This Version of Kodi" Mean?

The freshly released version of Kodi (Kodi 19.0 'Matrix') brings a whole slate of improvements. Among those is the decision of Kodi’s developers to switch to Python 3. That means that an entire range of addons isn't compatible with Kodi 19 – as we wait on third-party developers to update their software creations.

More precisely, Kodi 18 'Leia' used to support addons that relied on Python 2.7, which was the case with previous Kodi versions as well. That is also the reason why upgrading to a major new version of Kodi would leave your addons intact in this past (and this applies to both "official" and "unofficial" addons).

However, Kodi 19.0 'Matrix' uses Python 3, which isn't backward-compatible with the previous version. That's precisely why you see the 'the add-on is not compatible with this version of Kodi' error message.

Is There a Way to Fix This Issue? Can You Still Access Addons Not Compatible With Kodi 19?

With that said, the simplest explanation is the following one. Third-party developers of Kodi addons aren’t typically paid for that job. Instead, they’re volunteers. And as you can imagine, transitioning their Kodi addons to Python 3 might not be their priority.

Therefore, this whole situation doesn't have anything to do with Kodi users. And also, there's really nothing you can do to fix this issue – but wait for your favorite addons to be updated by their developers. While waiting for that to happen, there's no way to access or use addons that are incompatible with Kodi 19.

When Can We Expect From Incompatible Addons to Be Updated for Kodi 19?

Well, that is very hard to predict. Developers did have plenty of time to migrate their addons, which clearly didn't happen in the way Kodi's developers hoped to see. Still, it's good to know that Kodi 19.0 is finally out – and this will undoubtedly force developers to speed up their work.

We hope to see the most popular Kodi addons being updated for Kodi 19 in the coming weeks. And in a couple of months, this will certainly spread over lesser popular addons as well.

So, have you already updated to Kodi 19, and what's your opinion on this situation? Let us know via the comments section below. And finally, thanks for reading!