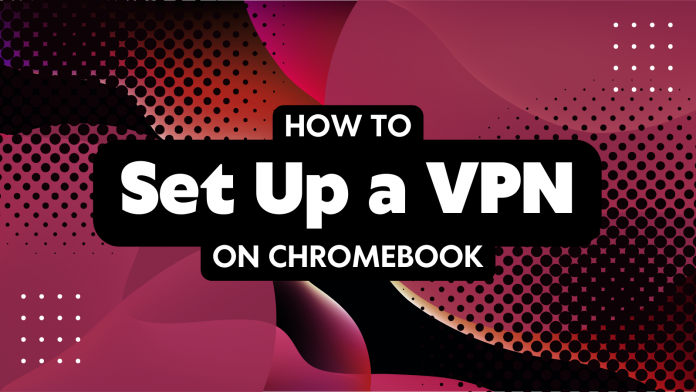 In terms of setting up a VPN on your Chromebook, you now have more options than ever before. With that said, you're in luck if you have a relatively new Chrome OS device, as that means you can install an Android VPN app. However, your options don't stop there.

You can also manually set up a VPN on Chrome OS, which is an excellent option if you have an older Chromebook. Then, you can add a VPN extension to Chrome, helping you safeguard what you do in that specific Web browser only. Lastly, if you're a more advanced user, you can switch to using Linux VPN apps on your Chromebook.

Therefore, truly plenty of options overall. Let's help you decide which method of setting up a Chrome OS VPN suits you the best. Keep reading to learn more!

How to Set Up a VPN on a Chromebook

These are the 4 different methods to install a Chromebook VPN:

Many Chromebook models now support Android apps. If you have a relatively new Chrome OS device (from this list), you can install an Android VPN app from the Play Store.

If you have an older Chromebook, go to Settings > Apps > Google Play Store. If your device supports Android apps, you'll see a way to enable those apps.

As mentioned above, modern Chromebooks (made in 2019 or later) now support Android apps. So, if you have access to Google's Play Store and Android apps, here's how to set up a VPN on your Chromebook:

1. Subscribe to a VPN that has a native Android app. Our recommendation is ExpressVPN. (You can also try it risk-free for 30 days.)

2. After subscribing to ExpressVPN, open the Play Store app on your Chromebook.

3. Search for "ExpressVPN" and then tap "Install."

4. ExpressVPN will now download and install on Chrome OS. Launch the VPN app.

6. When asked for a connection request, tap "OK."

7. Finalize the initial setup. Once done, you will reach ExpressVPN's home screen.

8. To connect to the nearest server, tap the circular ON/OFF switch.

9. To pick a specific location, use the button below the ON/OFF switch.

That's it - you now have full access to ExpressVPN, letting you encrypt your data and safeguard your privacy. However, remember that any VPN will protect all your incoming and outgoing data – but only if you use Chrome OS version 64 or newer.

If you use an older Chrome OS version, only the apps downloaded from the Play Store will be protected. Therefore, update your Chromebook to the latest available Chrome OS version to receive full protection.

To go through this installation method, you need a VPN that provides a list of server addresses and other required information. Also, your chosen VPN must support L2TP/IPsec. So, here's how to manually set up a VPN on your Chromebook.

1. Subscribe to a VPN that supports manual VPN configuration. You should go for ExpressVPN.

3. Tap "My Account" and enter your credentials. You'll reach your online dashboard.

4. Select "Set Up Other Devices" and then pick "Manual Configuration."

6. Note your username and password. Also, find a VPN location and its server address.

10. Tap "Connect" to initialize your VPN session and test your settings.

11. You should see a key icon next to your new VPN connection once you connect.

12. To disconnect, go to Network > VPN. Select your connection and pick "Disconnect."

Method #3: Use a Chrome VPN Extension

VPN extensions for Chrome are typically proxies and not fully-featured VPNs. Therefore, we don’t recommend them for doing ultra-sensitive tasks online. However, they can greatly help with media streaming and general Internet browsing.

Another way to set up a VPN on Chromebook is to use a Chrome extension. If you pick this route, know that your chosen VPN will protect everything you do inside the Chrome browser. So, your other apps will send and receive traffic without encryption.

If you're okay with that, here's how to install a Chrome OS VPN using an extension:

1. Subscribe to a VPN that has a reliable and robust VPN extension, such as NordVPN.

3. Search for "NordVPN" and open the extension's overview.

4. Install the VPN extension using the "Add to Chrome" button.

5. Confirm your decision by tapping on "Add Extension."

7. To activate the extension, select its logo (in the top-right corner of Chrome).

9. You can now connect to any server and encrypt your incoming and outgoing data.

11. That's it! You can now have full access to NordVPN's extension for Chrome OS.

Chromebooks that were released in 2019 and later can run Linux applications. Your device needs to run Chrome OS 69 or newer. Also, you need to enable support for Linux by going to Settings > Advanced > Developers > Linux Developer Environment.

If you decide to use a Linux VPN app on your Chromebook, we recommend using a VPN that offers a native app for this operating system. Here's what you need to do:

1. Subscribe to a VPN that offers a Linux app that works on Chrome OS, such as ExpressVPN.

2. Ensure that you've enabled support for Linux on your Chromebook.

7. Open Linux's Terminal and find the folder where you’ve downloaded the installation file.

8. By default, you should use the "cd ~/Downloads/" command.

9. Then, open the installer file using the "sudo dpkg -i [INSTALLER NAME]" command.

10. Make sure to enter the file's name and its extension carefully.

11. Then, type in "expressvpn activate" and hit Enter.

12. Return to your ExpressVPN dashboard, where you’ll see your unique activation code.

13. Paste it into Terminal and hit Enter to activate the VPN.

15. You've installed ExpressVPN, which means you can now start using the VPN.

16. Use the "expressvpn connect" command to connect to the nearest server.

18. Go with "expressvpn disconnect" to disconnect and end your VPN session.

19. That's it! You can now interact with ExpressVPN using its native Linux app.

As you can see, setting up a VPN on your Chromebook can be done in more ways than one. So, proceed based on your level of knowledge regarding VPNs and Chrome OS. However, no matter which path you pick, you'll first need to subscribe to a quality Chrome OS VPN service.

We'll once again remind you that our #1 recommendation is ExpressVPN, which works flawlessly on Chrome OS and supports a wide range of installation methods. You can even try ExpressVPN risk-free for 30 days, which is why it's among the best VPNs for a Chromebook.

If you wish to extend your VPN coverage to other devices, consult our central guide on setting up a VPN - with more than 60 devices and platforms covered.

Does a Chromebook Need a VPN?

Your Chromebook needs a VPN if you want to protect your privacy, ensure no one follows you on the Web, as well as unblock new websites or apps.

For more information, check our guide that explains what's a VPN. And then, you'll want to learn more about how VPNs work.

Do Chromebooks Have a Built-In VPN?

Some Chromebook models come with built-in tools for setting up a VPN connection. You can find those by going to Network Settings > VPN > Add a VPN Connection.

However, even if you have that option, you still need a valid VPN subscription. Therefore, Chromebooks come with a tool to set up a VPN - but they don't have a built-in VPN, per se.

What's the Easiest Way to Set Up a VPN on a Chromebook?

The easiest way to install a VPN on a Chromebook is to use a native Android app (if your Chromebook runs Android apps, of course).

Using a native Android app will help you protect all your incoming and outgoing Web traffic (not just what you do in Chrome). We recommend ExpressVPN for this purpose.

What's the Best VPN Extension for a Chromebook?

If you want a reliable Chrome VPN extension for your Chromebook, we recommend using NordVPN, which is easy to use yet highly powerful in every possible aspect.

Using NordVPN's Chrome extension, you'll get access to an army of servers, the ability to block various types of data leaks, as well as unblock websites and apps. To learn more, read our NordVPN review.

NordVPN or ExpressVPN - Which One's Better for Chrome OS?

If you need a Chrome extension, you should go with NordVPN. However, if you want a fully-featured VPN, your choice should be ExpressVPN.

How Do I Set Up a Free VPN on My Chromebook?

You can set up a free VPN app on your Chromebook by installing its Android app or using a Chrome extension, depending on what your chosen VPN supports.

However, we'll add that free VPNs aren't likely to bring a satisfactory experience. They come with limited performance and bandwidth, can hardly unblock websites and Chrome OS apps, and don't have the highest possible level of encryption.

If you're on a budget, we recommend checking our guide to the best VPN deals. You can also learn more about the best cheap VPN services.

If you have any questions about setting up a VPN on your Chromebook, make sure to post your comment just below. With that said, we conclude our guide. Thank you for reading!