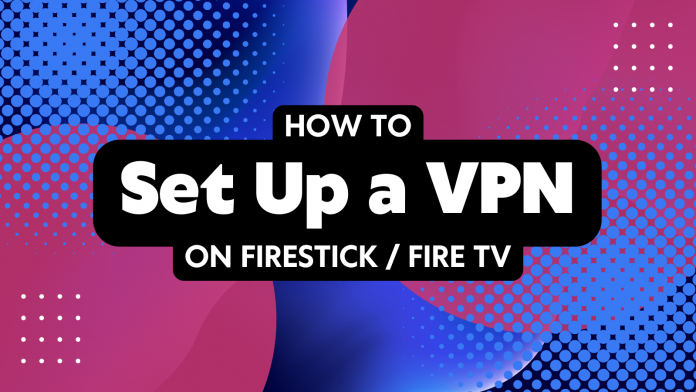 Owners of Amazon's Fire TV devices are in luck when it comes to VPNs. That's because most VPNs come with native Fire OS apps, which means you can set up a VPN on your Firestick and Fire TV in a matter of minutes - even if you have never used a VPN before.

More precisely, 2 methods exist to get a VPN on your Firestick / Fire TV. You can use Amazon's App Store, which is the easiest method available. Or, you can sideload a VPN, which is handy if your chosen VPN hasn't listed its app on Amazon's App Store.

No matter which path you pick, the result will be the same. You'll end up with a fully-featured VPN app on your Fire OS streaming device, allowing you to connect to servers, encrypt your Web traffic, and unblock new media streaming apps.

We're sure you're eager to start, so let's waste no more time!

How to Set Up a VPN on an Amazon Firestick

As mentioned above, you have two options in front of you. More precisely, here are the methods of setting up a VPN on Firestick and Fire TV devices:

For this method, you need a VPN with a native Fire OS app. More precisely, you'll turn to your device's App Store, from where you'll download and install your chosen VPN. Here's how you can make that happen:

This installation method applies to all Fire OS devices with the Amazon App Store built-in, except for the original Fire TV Stick (released in 2014).

1. Subscribe to a VPN with a native Fire OS app. We highly recommend ExpressVPN. (You can try it risk-free for 30 days.)

2. Once you subscribe, turn to your Firestick / Fire TV for the rest of this procedure.

3. Navigate to your device's search functionality. Then, search for ExpressVPN.

4. Select ExpressVPN's thumbnail among the search results visible on your TV screen.

5. At this moment, you should be looking at ExpressVPN's overview on the App Store.

6. Select "Download." Wait until the app downloads and installs on your device.

8. Pick "Sign In" on the first page of ExpressVPN's initial setup guide.

10. Select if you're okay with sending anonymous data to ExpressVPN.

12. Firestick will request you to authorize your VPN. Select "OK."

13. At this moment, ExpressVPN's home page should be visible on your TV screen.

14. Select the ON/OFF switch to allow ExpressVPN to find a suitable VPN server.

15. To pick a location manually, use the button below the ON/OFF switch.

16. Switch between the "Recommended" and "All Locations" tabs to reveal more locations.

17. To disconnect, use the ON/OFF switch again. ExpressVPN's interface will turn red.

We'll remind you that ExpressVPN comes with unlimited bandwidth. So, if you plan on leaving it active at all times, you won't encounter any issues. That's especially beneficial for Firestick and Fire TV devices, as media streaming requires a lot of bandwidth.

Method #2: Sideload a VPN App on Your Firestick

Next, we'll show you how to sideload a VPN app. This method is helpful if your VPN doesn't offer a native Fire OS app. So, here's how to set up a VPN on your Firestick via sideloading:

This installation method applies to Fire OS devices made in 2017 and later – which are powered by Fire OS and capable of running a VPN service.

1. Subscribe to a VPN that permits sideloading. Your best option is ExpressVPN.

2. Turn to your Firestick or Fire TV device for the rest of this procedure.

4. Select "Apps from Unknown Sources." This option must be set to "ON."

If the path above doesn't exist on your device, navigate to Settings > My Fire TV > Developer Options > Install Unkown Apps > Downloader (learn how to install this app using the steps you'll find below) > "ON."

6. Search for "Downloader," which is a dedicated Fire OS app.

9. Open the Downloader app. Pick "Allow" when you open the app for the first time.

11. You now need to enter a URL pointing to ExpressVPN's latest app for Fire OS.

ExpressVPN releases new app versions every couple of weeks. So, don't use any URLs you'll find in similar guides on the Web. Instead, go to ExpressVPN's website, click "Live Chat," and ask ExpressVPN's team for the URL of the latest ExpressVPN APK installer.

14. Finally, select "Open." You can also open ExpressVPN by returning to your Home Screen.

16. Decide if you're comfortable with sending anonymous analytics to ExpressVPN.

17. When asked for a connection request, pick "OK."

18. At this moment, you should be looking at ExpressVPN's home screen.

19. Connect to a "Smart" location using the circular ON/OFF switch.

20. Pick another location using the button beneath the ON/OFF switch.

21. Lastly, use the ON/OFF switch again when you want to disconnect. That's it!

Keep in mind that your sideloaded ExpressVPN app won't update on its own. So, when you wish to update, you'll need to reinstall ExpressVPN using the above steps. Installing a new version of the app over your old one will update the required files.

Ever since Fire OS opened up to third-party apps, installing VPNs has become a hassle-free process. With that said, your best option is to turn to Amazon's App Store, as that's the easiest way to set up a VPN on a Firestick or Fire TV.

We'll also remind you that the best VPN for a Firestick is ExpressVPN. So far, we've tested more than 60 VPNs, and none of those matched ExpressVPN's capabilities. That's especially true for media streaming, as this VPN can help unblock any platform. Go ahead and try ExpressVPN risk-free for 30 days.

Lastly, we'll point you to our central guide on setting up a VPN. We're sure you have more devices at home that need VPN protection, so why not take a look?

Does Fire OS Have a Built-In VPN?

No, Fire OS doesn't have a built-in VPN. That means you'll need to use a dedicated VPN service and download its native app on your Fire OS device.

Differently said, the easiest way to get started with to sign up for ExpressVPN (our top recommendation). Then, you can download ExpressVPN from Amazon's App Store and start using it within minutes of your time.

What Firestick Models Work with a VPN?

The easiest way to check if you have a compatible device is to navigate to Amazon's App Store. Then, input "VPN" and see if that search term returns any results.

What Can You Do With a VPN for Firestick?

Since Amazon's Firestick and Fire TV are media streaming devices, VPNs will help you unblock new types of content as well as all-new streaming apps.

For example, you can unblock hidden Netflix titles on your Firestick. Also, you can access free apps like Pluto.TV, Popcornflix, Amazon's Freevee, and Crackle - even if you're not in the USA. That's just a taste of what VPNs can do.

Do You Need to Jailbreak Your Firestick to Install a VPN?

No, there's no need to jailbreak or alter your Firestick in any way. That's because VPN apps are already available on Fire OS' App Store.

Even if you want to "sideload" a VPN (helping you bypass Amazon's App Store altogether), that also can still be done without jailbreaking your media streaming device.

What's the Easiest Way to Install a VPN on a Firestick?

The easiest way to install a VPN on a Firestick is by downloading its app from Fire OS' App Store. That process won't take more than a couple of minutes in total.

If you need our recommendation, we believe that ExpressVPN is the most capable VPN available right now, featuring an unbelievably polished installation procedure.

How Do I Turn On a VPN on My Firestick?

To turn on a VPN on your Firestick, you first need to set it up. For example, you can use Fire OS' App Store to download and install your chosen VPN.

Then, you need to open your VPN app. There should be an ON/OFF switch on its home screen, using which you can activate your VPN connection.

Do VPNs Get You Free Movies on Firestick?

Yes, you can get free movies on your Firestick using a VPN - especially if you're not in the USA. That's because VPNs help you unblock new Fire OS apps.

By connecting to a US-based server, you can unblock geo-restricted apps such as Crackle, Pluto TV, Tubi TV, and more. All of them bring free-of-charge movies.

Make sure to learn more about the best free movie streaming apps.

You've reached the end of our guide on how to install a VPN on your Firestick. If you have any questions, make sure to post them just below. And lastly, thank you for reading!