Free VPN vs. Paid VPN vs. Free Trial VPN – What’s the Difference Between Them? Which One’s Right for You? 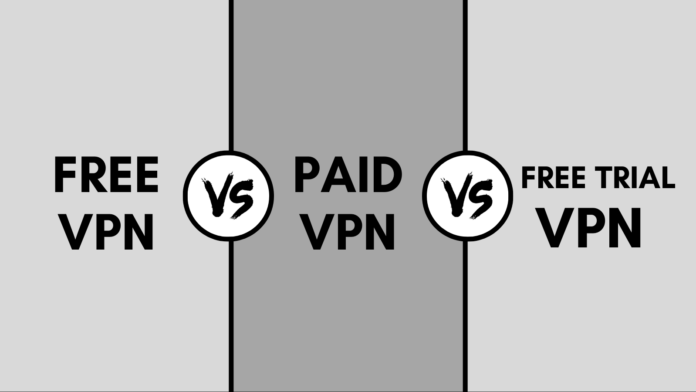 You’ve probably heard that VPNs protect your privacy, help you unblock media streaming services, and keep your P2P file sharing anonymous. All of that is true – but keep in mind that not every VPN is the same, especially once you compare their cost. We’re sure that many of you wonder about the differences between free VPNs, paid VPNs, and free trial VPNs – which we’ll help you understand and pick the best option for you.

With that said, we wish you a warm welcome to our free VPN vs. paid VPN vs. free trial VPN comparison, where we’ll dive into various aspects of those VPNs, helping you understand their pros, cons, and ideal use cases. With that said, let’s jump right in!

We’ve decided to explain the differences between free, paid, and free trial VPNs via five different aspects, as you can see just below.

We'll start our comparison of free, paid, and free trial VPNs with the most crucial aspect. And yes, we're talking about your digital privacy and security.

SUMMARY: In terms of keeping your privacy intact on the Web, there are significant differences between free and paid VPNs. In short, if you want to keep away trackers and other snooping technologies, we recommend using a free trial VPN with the intention of becoming a paying VPN customer at some point.

The overwhelming majority of free VPNs impose data limitations, which is a way to cut their costs. So, let's see how strict those limitations are.

SUMMARY: While free VPNs tend to come with quite rigorous data allowances, you won't find such a thing in paid VPNs. That is precisely what makes free VPNs useable only for quick online tasks, like browsing the Web or checking your email.

In this segment of our free VPN vs. paid VPN vs. free trial VPN comparison, we’ll talk about what to expect from them in terms of their speed and performance.

SUMMARY: Once again, we encounter many differences between free and paid VPNs. This time around, while free VPNs limit their speed and performance, paid VPNs allow you to take full advantage of your Web/VPN connection. And since free trial VPNs act as gateways to paid VPNs, you can expect unlimited speeds from those as well.

Looking for a free or affordable VPN for media streaming and torrenting? Let’s see whether free, paid, or free trial VPNs can answer your needs.

SUMMARY: If you want to stream media and download torrents, know that free VPNs won’t enable you to do that. Your only option (and your best option overall) is to use a paid VPN, all of which work automatically, without much input on your part.

SUMMARY: You know how they say – if you don’t pay using money, you pay using something else. That’s especially true for free VPNs, which often exploit your privacy, inject ads, and use all kinds of trackers to collect data.

With that said, we strongly recommend using a paid VPN. If you’re on a tight budget, make sure to check the best VPN deals available right now. And also, here’s our list of the best cheap VPN services.

In the End – Should You Go for a Free, Paid, or Free Trial VPN?

You're getting closer to the end of our free VPN vs. paid VPN vs. free trial VPN comparison. So, to summarize everything said above, make sure to check the table found just below.

That would be all for our free VPN vs. paid VPN vs. free trial VPN comparison. If you have any doubts or questions, share them via the comments section below. And lastly, thank you for reading!