ExpressVPN Free Trial vs. Paid Subscription (2021) – What Do You Get From Each? 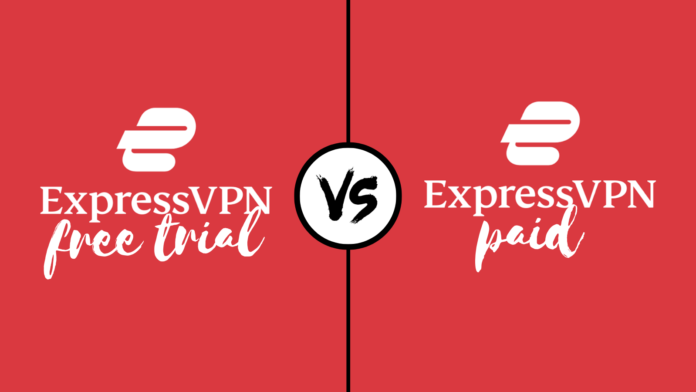 If you set out to find truly the best VPN available today, you’ll see that ExpressVPN’s name gets mentioned quite often. And if you check our hands-on ExpressVPN review, you'll see why. Even though we're talking about a hugely capable VPN here, with the ability to meet the needs of even the most demanding users, you'll still want to test-drive it. With that said, know that our ExpressVPN free trial vs. paid subscription comparison will answer all your questions.

Keep in mind that ExpressVPN doesn’t really advertise its free trial – as much as it should. Instead, the VPN focuses on its 30-day money-back guarantee. However, if you opt for a free trial, you won't need to pay anything until the trial ends. So, we're talking here about what you'll get if you choose the ExpressVPN free trial and what if you decide to get ExpressVPN's paid subscription straight away.

To access ExpressVPN’s 7-day free trial, you need to sign up via iOS/iPadOS or Android (the provided link will open the respective App Store/Play Store listing). In other words, signing up is done from ExpressVPN’s app and not its website (which you can use to get ExpressVPN's regular subscription plan).

And now, let’s dive deep into our ExpressVPN free trial vs. paid comparison, which we’ll do by inspecting various individual aspects of this VPN. So, keep on reading.

You’ll want to know what devices and platforms are supported by ExpressVPN’s free trial, as well as if there’s any difference in what you’ll get via paid subscription.

SUMMARY: You need to access ExpressVPN’s free trial on your iPhone, iPad, or Android device. However, once you sign up, you’ll get the full benefits included with ExpressVPN’s premium plans for up to 7 days. That means you’ll get to access the VPN on any device as well.

In this section, we’ll check what VPN features you can count on – comparing what ExpressVPN’s free trial and paid subscriptions bring.

SUMMARY: When comparing ExpressVPN’s free trial vs. paid subscriptions, there aren't any differences in the tools or functionalities they bring. Of course, when using a free trial, you’ll be limited only by its duration (which lasts 7 days).

Wondering if you’ll get access to ExpressVPN’s entire network if you use the free trial? Or maybe you have to pay for that privilege? Let’s find out!

We're sure you're looking for a fast VPN that complements anything you do online. So, let's see what to expect from ExpressVPN's free trial vs. paid subscriptions regarding their performance.

SUMMARY: Once again, there are no differences between ExpressVPN’s free trial and paid accounts. Both of those will get the fastest possible speed that ExpressVPN can promise, along with no bandwidth or data limitations.

We’d like to praise ExpressVPN’s media streaming capabilities, which are top-notch. So, let’s see if all ExpressVPN users will get to experience the same thing.

SUMMARY: No matter if you choose to get ExpressVPN's free trial or if you subscribe to the VPN immediately, you'll get a whole new world of media streaming services. This VPN plays well with most of them, unblocking them from anywhere in the world.

ExpressVPN has one of the best customer support systems out there. So, let’s see if both free trial accounts and paid subscribers receive access to the same support resources.

SUMMARY: We could say a lot about ExpressVPN's customer support, which could serve as an example of how digital services should treat their customers. And in that sense, there's no difference between ExpressVPN's free trial vs. paid customers.

So, how much you'll need to pay (and when) to access all of the features mentioned above? Here's a complete breakdown of ExpressVPN's pricing!

SUMMARY: Using ExpressVPN's free trial is an excellent way to test-drive the VPN. However, you'll lose ExpressVPN's money-back guarantee if you take that route. Since this is a no-questions-asked guarantee, paying for ExpressVPN immediately comes without a single risk.

In the End – Should You Take Advantage of ExpressVPN’s Free Trial?

To help you summarize your impressions, we’ve prepared a handy table putting side-by-side the most important aspects of our ExpressVPN free trial vs. paid comparison. So, take a look just below.

As you can see, you won’t make a mistake either way. So, if you want to try ExpressVPN for free, getting a trial account seems like a good idea. Still, you’ll need to do that from your mobile device, and you’ll be automatically charged (if you don’t cancel on time) once your 7-day trial ends. So, there’s a couple of things to keep in mind there.

If you don’t want to worry about anything, we recommend going for ExpressVPN’s paid subscription immediately. Even though you'll be charged once you sign up, you'll have more options regarding the available plans. And in case of any issue, you can always cancel your subscription and receive your money back, as ExpressVPN's 30-day money-back guarantee comes with no questions asked.

That would be all for our ExpressVPN free trial vs. paid comparison. If you have any questions on your mind, share them with us via the comments section below. And lastly, thanks for reading!