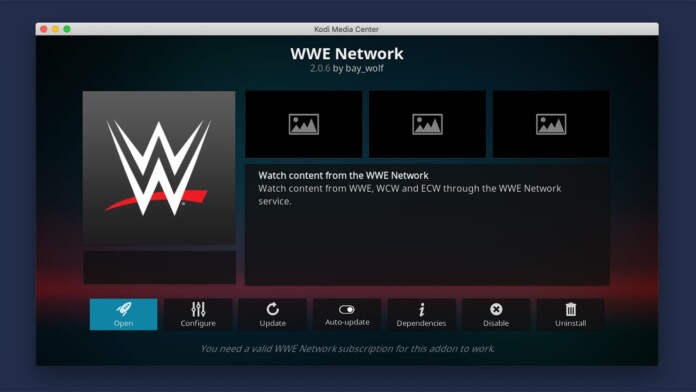 It's true that streaming WWE-related content on Kodi is possible - but know that you don't have plenty of options right now. When you set out to search for the best WWE Kodi addons, you will most likely find a handful of options, most of which won't work properly.

After plenty of testing and trying out all kinds of addons, we've settled on a single option. We're talking about 'WWE Network,' which requires a valid subscription to work. And with that said, this truly is the best way to watch WWE on Kodi in 2022 - at least for now.

So, let's show you what to expect out of that addon, how to install it, and plenty more.

Make Sure to Use a VPN When Watching WWE on Kodi - Here's Why!

When using WWE-focused Kodi addons, you need a VPN if you want to reach (unblock) more content while making sure your privacy is intact.

WWE events are often geo-restricted, as WWE has numerous partners around the world. That means that you might miss out on some events, based on where you live. However, that's not a problem if you use a VPN - as that type of software unblocks any Kodi addon out there.

By changing your IP address, a VPN will make it look like you're somewhere else. That makes it easy to unblock more content via Kodi, without thinking of any restrictions or geo-blocks.

Aside from that, VPNs hide your Web traffic from your ISP (Internet service provider), which can often improve your overall media streaming experience. You'll encounter less buffering and steadier performance.

To learn more about your options, here are the best VPNs for Kodi. And also, don't forget to check how to use a Kodi VPN.

Based on our experience, we recommend ExpressVPN, which comes as the best VPN for Kodi right now. If you subscribe to ExpressVPN today, you can save 49% and get 3 EXTRA MONTHS added to your subscription!

And now, let's talk about the best WWE-focused Kodi addon, which would be the 'WWE Network' addon. Here's all you need to know.

If you’re into WWE, it’s not a bad idea to invest in a subscription. As you can imagine, the most famous media streaming service that’s all about wrestling is WWE Network. For $9.99/month, you can unlock over 9,000 hours of on-demand programming.

What’s unique about 'WWE Network' is that it offers its own original content as well. You will get to watch TV series like Wrestlemania, Destruction of The Shield, WWE Ride Along, Stone Cold Podcasts, Best of WWE Hall of Fame, and many others.

How to Install WWE Network Addon on Kodi?

WWE Network doesn't come from Kodi's repository. You'll need to install it from GitHub. So, here's what exactly you need to do:

After you finish installing WWE Network, this addon will be placed in the 'Add-ons' section (Video Add-ons). Go ahead, find and launch it.

As you’ll see, you will be asked for your credentials. If you don’t have an account at WWE Network, you can create one, free-of-charge for the first month. After that, you’ll need to continue paying $9.99 on a monthly basis.

There are different ways to install addons such as 'WWE Network.' With that said, you can check our detailed guide to installing Kodi addons from GitHub. And if you wish to unlock Kodi and use even more add-ons, here's how to install addons for Kodi from ZIP files.

As you can see above, the 'WWE Network' addon comes from GitHub. So, certain errors might pop up, preventing you from installing the addon. In that case, here's what to do.

In the end, we would also like to recommend our central guide on how to fix Kodi errors. That's where you'll find several solutions to various problems with Kodi, so make sure to take a look.

Which WWE Addons for Kodi No Longer Work (Or Have Shut Down Permanently)?

To help you avoid those that no longer work, we'll highlight some of the most popular WWE addons that are now obsolete (they either don't work anymore, or they're no longer available):

Which Illegal WWE Kodi Addons Should You Avoid?

WWE Kodi addons like Fight Club, DS9, Rising Tides, The Crew, Sportowa, and Sport 365 are often recommended on the Web - but know that all of them are illegal.

Those addons enable piracy as they use illegal content providers, which is why they offer their content for free. With that said, using those addons comes with many risks as copyright infringement is against the law in most countries.

So, make sure to stick to our recommendations only. Even though you don't have too many options for watching WWE for Kodi, that's really not an excuse to reach for illegal sources of content (even if you hide your Web traffic through a VPN).

Our guide to the best Kodi addons brings you everything you need - more than sixty addons from a dozen different categories. And if you wish to explore similar articles, check out the best repositories for Kodi, as well as the best Kodi skins.

That would be all we've prepared on the best WWE Kodi addons in 2022. However, there's no need to stop here - as you can keep exploring the latest Kodi articles on TechNadu. Let us know if you have any comments, and thanks for reading!