The 5 Best Free VPNs for the Dark Web – Surf .Onion Sites with a VPN Without Breaking the Bank! 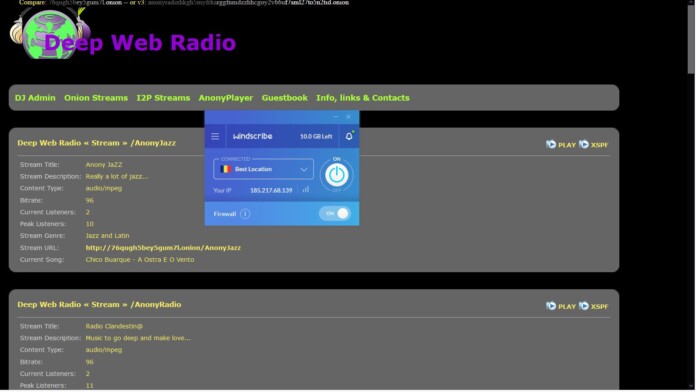 It's actually pretty simple to browse the dark web. You just need to make sure you're using a VPN to protect your privacy, or - why not - hide the fact that you're surfing .onion sites.

Since Tor (the browser you use to access the dark web) is free, you might expect VPNs to be free too. That's not usually the case, but there are some good free VPNs for the dark web out there. We'll tell you about them in this guide, and also answer some relevant questions.

When you surf the dark web with a VPN, only two things really matter - how safe your data and privacy are, and how smooth and stable your speeds are.

Unfortunately, free VPNs often offer weaker security than paid VPNs. Don't get us wrong - the free VPNs we mention in this article are definitely safe to use. But some of them lock important security features (like ad blockers) behind paywalls (meaning you're better off getting a paid subscription).

Of course, the same can't be said about random free VPNs you find on the app store. They usually log your data, expose you to ads (some of which are malicious), and can even infect your device with malware.

Besides that, free VPNs are slower than paid VPNs. Not to mention they often come with bandwidth caps. Tor is already very slow, so it's important to use a VPN that at least won't slow down your speeds by a lot.

So if you want to be sure you get a stable and safe dark web surfing experience, we recommend using a paid VPN. ExpressVPN is our favorite provider, but you can use this guide to find other good paid VPNs for the dark web. All of them have no-questions asked 30-day money-back guarantees, so you have plenty of time to see if they're worth the money.

How to Use a Free VPN for the Dark Web

The 5 Best Free VPNs to Access the Dark Web

Finding a good free VPN for the dark web is surprisingly difficult. Most free VPNs don't actually work well with Tor. We reached out to different providers to see which services support Tor traffic. Then, we checked out their features, tested their speeds, and finally found the best five free VPNs for the dark web:

Windscribe is a smaller provider that doesn't get all the attention it deserves. Its paid service is great, but its free VPN is surprisingly good too. It supports Tor traffic (obviously), but what makes it the top pick for us is that Windscribe also supports unlimited parallel connections.

That's right - you can use this VPN to access the dark web on as many devices as you want. You never have to keep signing out of different devices to use Windscribe on all devices at the same time. And their apps work on most platforms too!

They're also very generous with the data limit. Windscribe normally gives you 2GB per month, but you can get 10GB if you sign up with an email address and confirm it.

We also liked that you can use their Stealth and WStunnel protocols with the free version. With them, you can obfuscate your traffic to bypass VPN blocks. Also, this is a no-log VPN, and Windscribe's free VPN doesn't display any ads.

Other than that, the speeds are pretty good, the UI is nice, and you can use over ten servers.

To learn about Windscribe's paid service, check out our review.

ProtonVPN is one of the few providers that actually open-sourced all their software. So if you value transparency in your VPN, they might be the right pick.

ProtonVPN has apps for pretty much all platforms, but you don't get parallel connections. With the free plan, you can only use the service on one device. Also, you only get medium-ish speeds. They're nothing to write home about, but they're not bad either. Oh, and you can only use a few servers.

The good news is that ProtonVPN's free service doesn't have any bandwidth caps. Also, they don't keep logs, and don't display ads either. Also, the UI is very polished and intuitive.

ProtonVPN supports Tor traffic, but it's a shame that its Tor over VPN feature isn't available to free users. Basically, it lets you browse .onion sites directly in your browser (Opera, Firefox, Chrome, etc.). You also won't be able to use their NetShield feature (ad blocker) and Secure Core feature (DDoS protection).

Want to read about the paid version of ProtonVPN? Please check out our in-depth review then.

3. Speedify - Best Pick If You Want Tons of Servers

Out of all the VPNs we tested, Speedify has by far the biggest server network. If you want dozens of locations around the world and tens of servers to choose from, Speedify is the right pick.

The speeds are pretty okay, and this provider has apps for most devices. The UI is a bit dated, however, so it's not extremely pleasant to look at that. Plus, navigating the app's settings can be confusing.

With the free plan, you only get 2GB of data per month. And like ProtonVPN, you can only use Speedify on one device, so no simultaneous connections. The good news is that this VPN has a no-log policy and doesn't show ads. Also, you can use some decent security features like IP and DNS leak protection, a kill switch, and AdGuard (a DNS service with a built-in ad blocker).

In case you'd like to read more about Speedify's paid service, you can check out the full review right here.

4. Tunnelbear - Best Free VPN for the Dark Web for People New to VPNs

What makes Tunnelbear popular with people who never used VPNs before is its design. It's cartoony, but it just makes it very easy for anyone to understand what's going on. Also, the app's dashboard is very straightforward - you only have the server map and the settings, which are all self-explanatory.

Tunnelbear's free VPN offers a decent selection of servers, and support for up to five parallel connections. However, you only get 500MB of data per month and slower speeds.

But we were pleasantly surprised to see that the free version lets you use a kill switch (called VigilantBear) and obfuscation (GhostBear). Oh, and it doesn't store logs or dislay ads.

Want to take a closer look at what Tunnelbear's paid version has to offer? Here's our hands-on review.

5. Avira Phantom - Best Pick If You Want to Pair It Up with Antivirus Protection

When you browse the dark web, antivirus protection is a must. So it's a good thing that Avira Phantom works through the main Avira app.

From it, you launch Avira Phantom, but you can also get Avira's free antivirus program. And you get other free privacy and security tools too - a password manager, a browser extension that blocks malicious domains (Browser Safety), and a way to fix over 200 privacy issues in Windows (Privacy Pal).

On its own, Avira Phantom's free version isn't anything too special. You get 1GB of data per month, pretty slow speeds, and you can't pick which server you use. The free plan only lets you use the "Nearest Location" option.

Still, it is nice that Avira Phantom (like Windscribe) lets you use their service on as many devices as you want.

Here's a list of common questions people ask about the dark web and VPNs. If you want more answers, just leave your question in the comments at the end of this article, and we'll try to reply as soon as we can.

How Else Can You Stay Safe on the Dark Web?

We suggest reading our article on this topic. It explains what measures you'd need to take to get a safer experience on the dark web.

If you're in a rush, no problem - here's a quick rundown of what you should do:

Is It Illegal to Access the Dark Web with a VPN?

Generally, no. In most countries, neither VPNs nor the dark web are illegal. What is illegal is using a VPN or the dark web to do illicit stuff - like buying illegal weapons and drugs.

How Do You Find .Onion Sites?

The easiest way to do that is to post a question in these subreddits:

Just ask people to recommend some .onion sites. Or ask them to provide a list of Tor sites.

You can also google that question. You'll often find lists like this one.

Will Using the Dark Web with a Free VPN Slow Down Your Speeds?

Most definitely. VPNs already slow down your speeds, and - like we said at the start - free VPNs are slower than paid VPNs. Expect noticeable speed drops and longer server connection times.

Even when we used a nearby server from the speediest VPN (Windscribe), we still barely averaged 5-6 Mbps. For reference, nearby server speeds with paid VPNs usually average around 11-12 Mbps for us.

You can try to optimize your VPN speeds if you want, just don't expect huge speed boosts.

What's the Difference Between the Dark Web and the Deep Web?

You'll see the two terms used interchangeably, but they're not the same thing.