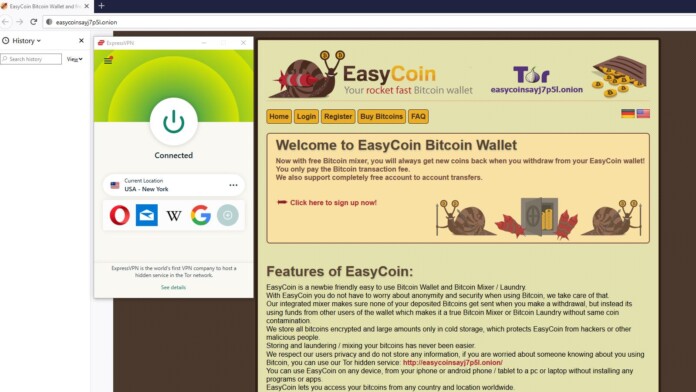 Visiting the dark web isn't as difficult as you might think. But only relying on Tor to do that isn't smart. On its own, it's just not very secure, which is why you pair it up with a VPN. But how do you know what are the best VPNs for the dark web?

Well, it's simple - we'll tell you all about them in this article. We'll also include a step-by-step guide showing you how to use the VPN to surf the dark web, and answer some FAQs.

How to Use a VPN to Access the Dark Web Safely

The 5 Best VPNs for the Dark Web

Not all VPNs support Tor traffic or offer secure features. To save you time, we ran some tests and found the best five VPNs for the dark web:

What we really like about ExpressVPN is that all its servers support Tor traffic. You won't see this mentioned in their marketing copy, but we confirmed it with their support reps.

Another reason we consider ExpressVPN the best VPN to access the dark web is because of its proprietary Lightway protocol. It's not really a big secret that VPNs can slow down your speeds, and that Tor is very slow too. So it helps to have a speedy protocol like Lightway on your side. Don't expect lighting-fast speeds when using Tor, but they'll still be better than what other VPNs offer. Plus, it takes you a fraction of a second to connect to a VPN server.

Other than that, ExpressVPN has top-notch security thanks to its powerful encryption, zero-log policy, and kill switch (called Network Lock) which protects you from traffic leaks. What's more, ExpressVPN's servers are RAM-only, meaning any stored data is wiped with every reboot. Also, they don't write any data to the hard drive, meaning you get more privacy.

And if you ever have any questions or issues, ExpressVPN's support team is just a live chat message away (they're available 24/7). Best of all - you buy with zero risk since ExpressVPN has a no-questions-asked 30-day refund policy.

Want to find out more about this provider? Check out the full ExpressVPN review.

All of NordVPN's servers support Tor traffic, but this provider has a special category of servers optimized just for Tor. They're called Tor over VPN servers. When you use them, you don't need to connect to a regular server and use Tor to browse .onion sites. Instead, you can do that directly in your browser (Opera, Chrome, or Firefox)!

Their iOS app also has a Dark Web Monitor. It's a feature that alerts users if their login credentials were exposed on the dark web.

The speeds are relatively smooth thanks to NordVPN's modified version of WireGuard (NordLynx). Also, your data should be 100% safe since this provider uses strong encryption, doesn't store any logs, has a kill switch, and uses diskless servers (RAM-only).

What's more, NordVPN has a cool security feature called CyberSec. It works like an ad blocker, but it also blocks connections to malicious domains. We reached out to them, and they confirmed that CyberSec can also block malicious .onion sites.

And like ExpressVPN, you also get 24/7 live chat support (with really friendly reps) and a 30-day money-back guarantee.

To find out more about NordVPN, please read our review.

CyberGhost VPN supports Tor traffic on all its servers. But if you want to get top-notch privacy, you can use specific servers that are fully optimized to secure it: the NoSpy servers. Not only do they support Tor traffic, but they're also under CyberGhost VPN's complete control. Only their staff has access to them. These servers are also based in Romania, a country with no laws that enforce data gathering.

Furthermore, the NoSpy servers are particularly fast thanks to extended bandwidth and a dedicated uplink.

Besides that, it's worth mentioning that CyberGhost VPN's servers are RAM-only (much better privacy). Also, this provider has a kill switch, a feature that blocks ads and malicious domains, and reliable encryption. Oh, and they don't keep any logs either.

To wrap things up, we should also say that CyberGhost VPN has professional 24/7 live chat support, and a very generous 45-day money-back guarantee (only available for long-term subscriptions, though).

ProtonVPN is committed to being fully transparent, and it shows. They're one of the few providers to have open-sourced all their apps. So if you don't trust their privacy claims (zero logs), you can check them out for yourself.

ProtonVPN also has an interesting Tor integration. It works similar to NordVPN's Onion servers. You connect to a Tor VPN server, and you can use .onion sites on regular web browsers.

If you'd like to find out more about ProtonVPN, here's our hands-on review.

All of Surfshark's servers support Tor traffic. Other than that, they offer more or less the same privacy features like all the other VPNs on this list: a kill switch, ad-blocking and protection from malicious domains (CleanWeb), reliable encryption, and a zero-log policy.

But what makes Surfshark stand out is their support for unlimited parallel connections. Most VPN providers offer only up to five or seven simultaneous connections. Surfshark says "no thanks" to that, and lets you use their service on as many devices as you want!

So, this is a great pick if you - for some reason - need to browse Tor sites with a VPN on tons of devices at the same time. Or if you want to save money by sharing the VPN subscription with your friends and family (without always having to wait for someone else to log out of the account before you can use it).

Interested in finding out more about Surfshark? Check out our in-depth review then.

AstrillVPN has great and convenient Tor integration like NordVPN and ProtonVPN. Basically, as long as you use AstrillVPN, you can browse .onion sites in any browser you want. No need to install and use the Tor browser anymore!

AstrillVPN also has its own protocols: OpenWeb and Stealth VPN. This provider developed both of them with online censorship in mind (specifically how to bypass it). OpenWeb is particular interesting because it's connectionless, so it takes little time to connect to a server.

AstrilVPN also has a kill switch, strong encryption, and doesn't keep any logs. So why isn't it on the main list with the other VPNs?

Well, despite its great Tor support, AstrillVPN has some noticeable drawbacks:

If you'd like to take a closer look at AstrillVPN, please read our review.

Other Ways to Stay Safe on the Dark Web

We already have a lengthy article that discusses how to stay safe on the dark web. Besides making sure Tor's privacy and security settings are enabled and using a VPN, here's what else you could do:

Here are some answers to the most common questions we saw people asking about Tor and using VPNs with it. If you have more questions, no problem - just leave them in the comments, and we'll try to answer them ASAP.

Can I Use Free VPNs to Access the Dark Web?

You can, but you have to be careful which one you use. Definitely don't pick a random free VPN you find on the Google Play store. It could expose you to malware or log your traffic.

To find a reliable free VPN, please use our guide. Just keep in mind free VPNs come with limitations - slower speeds, less servers, and bandwidth caps. Tor over VPN browsing will already be slow, so the slowdowns caused by free VPNs could be a problem.

How Do You Find .Onion Domains?

This can be a bit tricky. The best thing you can do is ask on Reddit. Subreddits like r/TOR and r/onions are your best friends. Just post a question asking about .onion sites. Alternatively, google "list of Tor sites" or something like that, and you should find plenty of helpful resources.

For example, this guide tells you about different ways to find .onion domains. And this GitHub link has a very long list of Tor sites.

Why Not Use VPN Over Tor?

This method isn't as secure as using Tor over VPNs. If you connect to Tor and then to a VPN, you'll mainly rely on Tor for security.

While Tor isn't a bad privacy tool, it's not ideal either. Before your traffic reaches the VPN server, it passes through one last Tor server. If a malicious actor is running it (anyone can do that), they could expose your traffic to malware or just log it (it won't be encrypted when it leaves the Tor server).

Tor also had issues with leaked IPs in the past. And there's also the fact that the US government might have created Tor (it probably did since it funds it), and that the CIA uses it. Not great for your privacy, to be honest.

If you use Tor over VPN, you'll be much safer. Even if Tor leaks your IP or some exit server eavesdrops on your traffic, that won't compromise your privacy since the VPN will hide your IP and encrypt your traffic.

Is It Illegal to Use the Dark Web?

No - at least as far as we know. We haven't heard of any countries outright making the dark web illegal.

However, what you do one the dark web can be illegal depending where you live. For example, it's definitely illegal to buy illicit drugs and weapons over the dark web. Or take part in online forums that involve death threats, doxxing, and hate speech.

What's the Difference Between the Dark Web and the Deep Web?

These two terms are often used interchangeably, but that's not very accurate. The dark net is not the deep web. It's just a part of it. Here's what we mean:

Are Tor Over VPN Speeds Slow?

VPNs can slow down your speeds, but it's usually not by a lot (provided your original speeds aren't too slow). But the main issue is Tor - it's very slow. On average, we get around 2-4 Mbps.

Because there are way too few Tor servers (over 6,000) for how many users there are (a little over two million). Plus, Tor encrypts and decrypts your data at least three times.

We used Ookla Speedtest, a US server from ExpressVPN, and the provider's proprietary Lightway protocol (which is very fast) to see what kinds of speeds we'd get using Tor. For reference, the tester is from Romania, and has around 500 Mbps speeds.

We can't say we expected something else.

Using a nearby server (Hungary) improved our speeds a bit, but not by much. They jumped from 7-8 Mbps to 11-12 Mbps. Pages did load a bit faster, though.

Of course, not all VPNs have a fast proprietary protocol like Lightway. And most of you will probably want to use OpenVPN. So we ran a few speed tests using OpenVPN over UDP with ExpressVPN and the other providers on this list. These were our average speeds:

There are ways to speed up your VPN speeds, but we can't say how efficient they are when using Tor. Here's our guide if you'd like to try them.