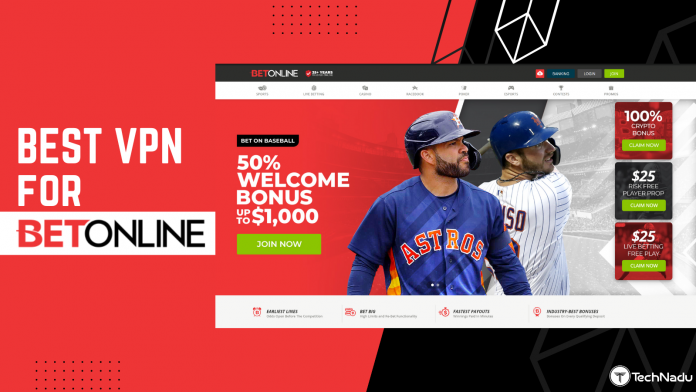 BetOnline is an all-in-one gambling site that lets you play casino games, bet during live sports matches, as well as bet on esports competitions. It has been online since 2011, and it's one of the most popular gambling sites in the United States.

If you're from one of the countries listed above, you'll encounter the following error message: "Oops! It's likely that we're having an internal systems issue." That message means that BetOnline's firewall has detected your location and is blocking your access.

However, a few other countries restrict access to the website as well. For example, our writer from Romania couldn't access the site because of legal reasons, even though the country isn't listed in BetOnline's Terms of Service.

If you're traveling to one of the countries mentioned above, or a country where online gambling is illegal, you can still get access to BetOnline. That said, using a VPN is the most popular way to bypass geo-restrictions. That's because the best VPNs for BetOnline can hide your IP address and replaces it with another one from a different country.

In addition to that, a VPN encrypts your traffic, so no one can see what you're doing online. This way, cybercriminals can't spy on your personal data, and your ISP can't see what you do.

However, keep in mind that using a VPN to gamble on the platform is against its rules. If you are caught, you risk losing all your money on the platform. So, we recommend contacting the platform's support reps. This way, you know what to do if you're traveling to another country where BetOnline is not available.

So, if you decide to use a VPN, you'll want to use the best VPN for BetOnline. Keep reading to learn more about the best options available today.

How to Unblock & Play on BetOnline from Anywhere with a VPN

Here's how you can use a VPN to get access to BetOnline from any country in the world:

The best VPN for BetOnline should give you access to the site, whether you connect to a distant or nearby server. Then, it should have a large server network, so you can always find a server nearby and get fast speeds. What's more, the best BetOnline VPN must offer solid encryption so that no one can spy on your Internet traffic.

Based on the criteria above, here are our 5 VPN recommendations for BetOnline:

1. ExpressVPN - Our #1-Rated VPN for BetOnline

ExpressVPN is the best VPN for BetOnline because it offers fast speeds and high security. It also has a large server network, so you can always find a nearby server to connect to for fast speeds.

It has industry-standard security features like a kill switch, strong encryption, and full data leak protection. So, no one can spy on your traffic, and your IP address won't be accidentally exposed online. ExpressVPN's no-logs policy has also been audited independently, and the results were published online so that anyone can check them.

It also has RAM-only servers. This means your data is wiped from ExpressVPN's servers when a server reset is performed. Plus, it has something called "Perfect Forward Secrecy." This feature changes the encryption key for each VPN connection. This way, cybercriminals can't compromise your encryption keys to spy on your Web traffic.

In our tests, we were always able to access BetOnline, and we also got very fast speeds. We never experienced lags or freezes, even when we played bandwidth-heavy games like live casinos and live poker.

If you want to read more about this VPN, check our in-depth ExpressVPN review.

NordVPN has found its way to our list of the best VPN for BetOnline because it has lots of useful security and privacy features. For example, it has all industry-standard features like a kill switch, strong encryption, and full leak protection. NordVPN also has advanced security options like RAM-only servers and perfect forward secrecy. Its zero-logs policy has been audited twice and proven true, so NordVPN doesn't log your personal data on its servers.

What's more, NordVPN has "Threat Protection." This feature scans small-size files that you download on your device, so you don't get malware by accident. Also, it blocks malicious ads or trackers that you might come across on BetOnline.

This VPN provider also offers dedicated IPs, so you won't get your VPN IP address blocked by BetOnline. If you want to find out more, check our NordVPN review.

CyberGhost VPN is another good choice if you want to get access to your favorite gambling sites when you're traveling. The VPN is based in Romania, which is a gambling-friendly country. Also, it has NoSpy servers that are designed to have faster speeds and improved security. In addition to that, only the CyberGhost VPN staff has access to those servers.

It also has a kill switch, bank-grade encryption, full leak protection, and RAM-only servers. We conducted leak tests on both distant and nearby servers, and our real IP address was never exposed.

What's more, CyberGhost VPN offers transparency reports every 3 months. This means that anyone can check all the requests the VPN received from agencies, law enforcement, and the government. Also, the VPN also shows that it refused to comply with each request.

It also offers dedicated IP addresses, so you'll have lower chances of getting your VPN IP blacklisted. In addition to that, dedicated IPs also offer better internet speeds, so you won't experience lags or freezes when you play your favorite gambling games online.

Surfshark is the best VPN for BetOnline if you have a large household since it allows unlimited simultaneous connections. It also offers apps for most operating systems, like Android, iOS, macOS, Linux, and Windows. All those apps are easy to use, and they're not buggy. In our tests, we never had any problem with Surfshark's VPN apps.

It has industry-standard features like a kill switch and bank-grade encryption. Plus, it has RAM-only servers and "Perfect Forward Secrecy." Also, Surfshark's browser extensions and server infrastructure were audited multiple times in the past. So, if digital privacy is what you're after, you'll find that here.

Check out our in-depth Surfshark review to find out more!

Private Internet Access is based in the US, which is not a privacy-friendly country. However, the VPN's no-logs policy has been proven true in court (more than once, by the way). So, your personal data or browsing history won't be stored on PIA's servers.

PIA has a kill switch, military-grade encryption, full leak protection, and a strict no-logs policy. It also has RAM-only servers. In addition to that, all PIA's apps are open-source, so anyone can inspect their code for security vulnerabilities. This means Private Internet Access is very transparent and can be trusted.

PIA also offers PIA MACE, which is an effective ad blocker that blocks malicious ads or trackers. In our tests, PIA MACE blocked 90% of the ads present on BetOnline. So, we didn't see any intrusive ads or trackers that can spy on our data.

Use our Private Internet Access review to learn more about this VPN provider.

In conclusion, ExpressVPN is the best VPN for BetOnline as it offers blazing-fast speeds on both distant and nearby servers. In addition to that, it has all the industry-standard security features you might want. And, of course, it unblocks BetOnline from any country in the world.

If you wish to expand your options beyond the recommendations found in this article, you can check our guide to the best VPNs for online gambling.

Can You Use a VPN with BetOnline?

BetOnline openly states that they prohibit the use of VPNs on their platform. So, you might risk losing your account if you go against their rules.

That said, if you're traveling to a country where you can't play your favorite gambling games, make sure to contact BetOnline's support, and the customer reps will tell you exactly what you need to do.

What Is the Best VPN for BetOnline?

ExpressVPN is the best VPN for BetOnline. It has all the industry-standard features like a kill switch, full leak protection, an audited no-logs policy, and bank-grade encryption.

This means that your data will be safe and not easily compromised. What's more, this VPN has RAM-only servers and "Perfect Forward Secrecy," making it a great pick for online gambling.

Yes, NordVPN is a great VPN to unblock BetOnline. In our tests, we were always able to unblock the site and access different gambling games.

Can You Use a Free VPN on BetOnline?

You can use a free VPN on BetOnline. However, we don't recommend going that route.

Free VPNs don't have security features as good as paid VPNs, so cyber criminals might steal your account. What's more, many free VPNs log user data and sell it for profit. So, your online data might get exposed to annoying advertisers and even your ISP.

That would be all for our guide on the best VPNs for BetOnline. If you have any questions, let us know via the comments section below. Thanks for reading!