How to Unblock Social Media in Russia in 2022 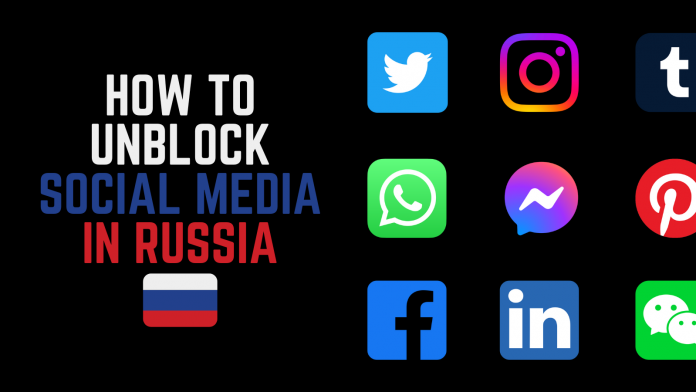 If you're here, then you already know the Kremlin has banned Facebook, Instagram, and Twitter in Russia. Why? Well, under the country's new "extremism law," the 3 social media giants were accused of facilitating the spread of propaganda against the Russian military. A VPN is now the most reliable way to get around this unfair censorship and unblock social media in Russia.

You'll be able to obtain an IP address from a different country, where social media sites aren't banned. Meanwhile, the VPN will mask your true location and encrypt your data so your Russian Internet provider can't spy on your activity.

As an added benefit to unblocking social media in Russia, a VPN will also let you access hundreds of streaming libraries from around the world - on platforms like Netflix, Hulu, Crunchyroll, and more.

Here's everything you need to know about how to unblock social media in Russia, plus some great VPN recommendations if you're new to the whole thing.

How to Unblock Social Media in Russia With a VPN

It should only take a few minutes for you to be able to access social media in Russia and regain your Internet freedom. Here's what you need to do:

We suggest using a server that's as close as possible to Russia for the best performance. Sweden, Finland, and Estonia are a few decent options, though feel free to choose servers further away for when you want to unblock streaming sites and other geo-blocked content.

Have trouble connecting to the provider's website due to the Russian VPN block? Head over to our helpful guide for some alternate download methods.

What is the Best VPN to Access Social Media in Russia?

Based on our tests, these are the most reliable VPNs that will let you access social media from Russia:

1. ExpressVPN - Our #1 VPN Recommendation for Social Media in Russia

ExpressVPN comes equipped with everything you need to unblock social media in Russia, whether it's Facebook, Instagram, Twitter, or any other tech sites caught in the recent ban. It has military-grade encryption (Lightway or OpenVPN, TCP, and UDP), watertight leak protection, a kill switch in case of disconnects, and an independently audited no logs policy to ensure none of your data is stored on their servers.

All of their apps offer max security and let you unblock social media in Russia in just one click (or tap). Obfuscation is enabled on all servers, meaning there's no risk of your Russian ISP detecting your VPN usage. Pretty essential, considering the Roskomnadzor is hard at work trying to block VPN services that refuse to comply with Russia's restrictive regulations.

Other than that, ExpressVPN's all-new Threat Manager will block intrusive trackers trying to create targeted ad profiles on you. Facebook and Instagram, in particular, are known to track you on external websites, even when you're not logged in.

Learn more about what the provider has to offer in our ExpressVPN review.

2. NordVPN - Most Security Options for Social Media in Russia

While ExpressVPN offers a well-rounded, beginner-friendly solution to unblock social media in Russia, NordVPN excels as a complete security suite. It's fit for users who want to join in on conversations censored by the Russian government (e.g., the war in Ukraine) without fear of fines or jail time.

To this end, NordVPN offers obfuscated (or stealth) servers outside Russia while using the OpenVPN TCP protocol. Try Double VPN for double-dose encryption while routing your traffic through two separate servers. This will take a toll on your overall speeds but will definitely keep you out of the watchful eye of the Kremlin. It is recommended for journalists, whistleblowers, etc.

Finally, NordVPN includes Threat Protection at no extra cost - a built-in ad-blocker and anti-tracking service that filters malware and phishing domains while scanning any downloaded files for malware. As phishing and malware are the 2 most frequent threats on social media, we'd say that's a good bargain.

Take a look at our NordVPN review for everything else we haven't covered here.

While CyberGhost VPN doesn't offer stealth servers, it provides the option of connecting to advanced "NoSpy" servers for a small extra fee. These are self-operated at the provider's HQ in privacy-friendly Romania (close to Russia) and are faster than their usual server fleet. Since NoSpy servers are self-owned, the risk of third-party data centers mishandling your data is completely out of the picture.

Moreover, CyberGhost VPN features bulletproof leak protection and an always-on kill switch that prevents your data from being exposed even during disconnects. No risk of forgetting to turn on the feature, either.

Other than that, CyberGhost VPN is one of the few VPNs that still operate servers in Russia. Great for ex-pats that want to keep up with their favorite TV series on Russia-exclusive streaming platforms.

Don't forget to check out our in-depth CyberGhost VPN review for the full scoop.

Why Do You Need a VPN to Use Social Media in Russia?

A top-notch VPN for social media will let you change your location to somewhere outside Russia, where Facebook, Twitter, and Instagram aren't banned. On top of that, your network traffic will be fully encrypted, thus keeping your browsing activity hidden from your ISP, hackers, and other malicious eavesdroppers.

Russia recently criminalized "fake reports against the war and the Russian military." As such, you never know when an off-hand comment on social media might lead to a steep fine, or worse, up to 15 years of jail time. Don't risk it - mask your online traffic with a VPN to protect your livelihood against the Kremlin's extreme censorship.

Here's a "VPN feature shopping list" for those of you that prefer to do your own research:

Anti-malware, ad-blocking, tracker, and phishing/malware domain filters are excellent for extra protection online. Of course, they're not absolutely necessary just to scroll through social media on your breaks. Still, it's nice to have options against all the various cyber threats out there.

Hopefully, the conflict in Ukraine and the social media blackout in Russia will end soon. Until then, a VPN is the most reliable way to access giants like Facebook, Instagram, and Twitter in Russia. You can get back in touch with friends and keep up to date with world news (without all the propaganda). Social media is also a great way to keep in contact with clients, so all the better reason to use a VPN.

ExpressVPN is a one-click security option with servers in different countries, many of which don't block social media. Enjoy lightning-fast servers with obfuscation enabled by default, as well as tracker filtering on ad-heavy networks like Facebook or Instagram.

We've also got two more recommendations in our list of the best VPNs for Russia. If you're interested in what other providers have to offer, give it a read. We also have separate guides for how to unblock Twitter, Facebook, and Instagram in Russia, although the process is pretty much the same.

What Social Media Is Banned in Russia?

LinkedIn was banned in Russia as early as 2016, as the platform would store Russian citizens' data outside the country's borders. As of March 2022, the big 3 social media giants (Facebook, Twitter, and Instagram) have also been banned under the country's new "extremism law."

Yes, VPNs are legal in Russia, although the Kremlin has blocked many major providers for refusing to comply with their data collection policies. If you're having trouble getting a good social media VPN in Russia, follow our guide for some alternative download sources.

Can I Use a VPN to Unblock Social Media in Russia?

Yes, you can. Despite the Russian social media ban, prosecutors have made it clear that citizens will not be punished for unblocking social media with a VPN. It's still worth masking your activity in case things change for the worse, though.

What's the Best VPN to Unblock Social Media in Russia?

ExpressVPN is the easiest-to-use option to unblock social media in Russia, with obfuscation enabled by default on all of their high-performance servers. Keep your activity hidden from your ISP and browse Facebook, Twitter, or Instagram at your leisure.

Simply connect to a server outside of Russia, and you'll be able to access any content available in that country - whether it's social media, Google News, or other sites blocked in Russia. Also, check out how to unblock Russian websites with a VPN if you're an ex-pat that wants to access Russian content from abroad.

We highly recommend going for a premium VPN if you plan to unblock social media in Russia without a hitch. Free VPNs fund their operations by logging and selling your data to ad networks, and their overall performance leaves much to be desired. You also have to deal with monthly data caps and a small number of typically congested servers - an all-around unpleasant experience on social media.

Need more info on how to unblock social media in Russia? Drop a comment below, and we'll be right with you!