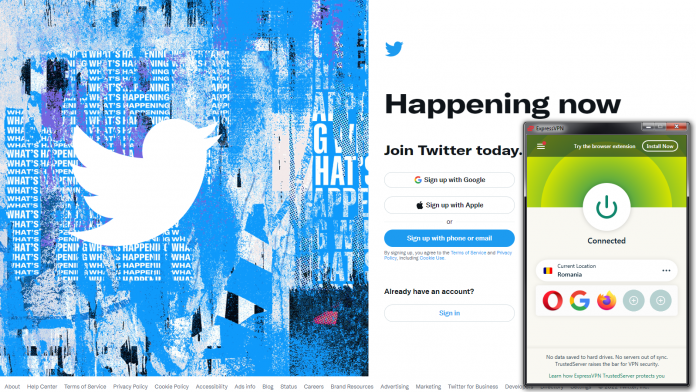 Twitter is one of the main ways for people to share their interests, stay in touch with friends, or keep up with breaking news. So when the Kremlin decided to ban Twitter in March 2022, many Russians were cut off from what was actually going on in Ukraine - not to mention being exposed to more propaganda surrounding the conflict. Thankfully, you can easily unblock Twitter in Russia with a VPN.

A VPN lets you obtain an IP address from abroad, in a country where Twitter, Facebook, and other services aren't banned. Not only that, but VPNs encrypt (or scramble) your online data so Russian ISPs and hackers can't spy on your activity. And if you don't know which VPN works best in Russia, we'll offer some helpful suggestions in a moment.

Until then, here's how you can actually unblock Twitter in Russia with a VPN.

How to Unblock Twitter in Russia with a VPN

It shouldn't take more than a few minutes to start using Twitter in Russia again. Here's a step-by-step guide on what to do:

We recommend connecting to a country close to Russia (such as Romania or Finland) for the best possible performance. The less distance your data needs to travel, the better your network speeds.

Now, the Russian government is aware that people are using VPNs to bypass their censorship. If the provider's website is blocked, then you'll need a different way to access it. Check out our ExpressVPN alternate downloads page for more help.

Based on our in-depth research, these are the 3 providers that work best with Twitter in Russia.

Unblocking Twitter in Russia should be a seamless experience, and that's exactly what you're getting with ExpressVPN. All its apps are super easy to use, and every server features obfuscation to mask your VPN activity against the Russian surveillance state. Naturally, it's easy to unblock Twitter by selecting one of their lightning-fast servers in countries worldwide.

Security-wise, you get military-grade encryption with either the usual OpenVPN configurations or ExpressVPN's own Lightway protocol for better performance. And, as expected, its TrustedServer technology ensures that any encrypted data passing through its servers are wiped periodically, sticking true to the no-logs policy it has in place.

Its apps also come with the new Threat Manager feature that blocks intrusive trackers at the DNS level, leaving you less exposed while browsing Twitter or other tracker-heavy sites. Finally, ExpressVPN offers leak protection and a kill switch to solidify your privacy even during unexpected disconnects.

We cover all these features (and more) in our ExpressVPN review, so go check it out.

NordVPN offers all the industry-standard VPN features that will keep you safe online and let you browse Twitter in Russia without any issues. Strong encryption (with WireGuard support via the NordLynx protocol), an independently audited no-logs policy, leak protection, and a helpful kill switch for unforeseen disconnections are some features offered by NordVPN.

Otherwise, its Threat Protection feature deals with other Internet dangers, such as malware and phishing sites, scanning downloaded files for malware, and even blocking trackers and intrusive ads.

Journalists, whistleblowers, and other anti-war critics may take advantage of its Double VPN function. It encapsulates your traffic in an extra layer of encryption, as well as routes your data through multiple servers to cover your digital tracks. Considering the severe punishments for anti-war sentiments in Russia, we highly recommend using it. That, and its obfuscated servers, of course.

Learn more about all these features in our in-depth NordVPN review.

While it's a shame that CyberGhost VPN doesn't offer obfuscation, it still has all the features required of a top-notch VPN, and it's a decent option to use Twitter in Russia. It's also one of the few providers that still operates in Russia. If you're an ex-pat and want to keep up with Russian TV shows while abroad, CyberGhost VPN is a great option for it.

Its built-in kill switch is always-on, meaning there's no risk of accidentally turning off the feature and exposing your IP address during disconnections. It also provides frequent transparency reports to show it remains committed to protecting your privacy online.

For less than a dollar more on your subscription, you gain access to its NoSpy servers in Romania. They are faster than their usual fleet and are operated by the provider itself, meaning you don't have to worry about any third-party data centers handling your info.

Read up on everything else they have to offer in our CyberGhost VPN review.

Why Do You Need a VPN to Use Twitter in Russia?

As mentioned, the Roskomnadzor decided to ban Twitter, Facebook, Instagram, and a host of other tech sites for "facilitating the spread of anti-Russian propaganda" following Russia's invasion of Ukraine.

As a result, you need a VPN to use Twitter in Russia by connecting to a server from abroad, where the service isn't blocked. If you used Twitter for business before the ban, a VPN would let you get back in touch with your clients.

More importantly, a VPN will hide your online activity from your ISP, which would otherwise log all your data and share it with the government. Not the best situation to be in, considering Russia's treatment of anti-war critics and dissidents.

If you'd rather do your own research before jumping onto a subscription, these are some of the essential features you should look for in a Twitter VPN in Russia:

Other features that are useful against various threats on the Internet but not necessary for Twitter: ad-block, anti-malware, phishing and malware domain blocking, and Double VPN (useful for journalists, whistleblowers, dissidents, etc.).

The Twitter ban and social media blackout in Russia isn't going away any time soon. Until the conflict in Ukraine is over and things return to normal, a VPN is your best way to access Twitter in Russia.

Now, each of our recommendations can perfectly unblock Twitter in Russia. That said, we suggest you go for ExpressVPN as it's the most user-friendly alternative, with fast obfuscated servers to bypass censorship and maintain your privacy against intrusive Russian ISPs and government surveillance.

Want to explore more VPN options? Then check out our list of the best VPNs for Russia for 2 extra quality providers.

While Twitter, Facebook, Instagram, and other websites have been banned in Russia under its new "extremism law," accessing Twitter with a VPN is still legal, according to Russian prosecutors. That said, those expressing anti-war sentiments or "fake news" about the Russian military on Twitter risk steep fines or up to 15 years in jail.

Twitter and other social media and tech giants are banned in Russia, although it's not illegal to bypass these restrictions. Thankfully, you can still use Twitter in Russia with a VPN (such as ExpressVPN).

VPNs are legal in Russia, although they need to follow the government's strict regulations to operate in the country. As a result, many providers have pulled their servers from Russia, and some have been blocked. You can still use alternate means to access them, though. See our guide for when ExpressVPN's website is blocked.

Absolutely. Although the service has been banned in Russia, prosecutors have mentioned that citizens won't be punished for using a VPN to unblock Twitter. However, it's a different story if you use it to "spread 'fake news' about the Russian military," - which is punishable with fines or serious jail time.

What's the Best VPN to Unblock Twitter in Russia?

Our suggestion is ExpressVPN. Not only is it one of the few VPNs that work in Russia (and can unblock Twitter), but it also features obfuscation and remarkable speeds on all servers. Plus, you can install ExpressVPN on a compatible router to better evade detection.

Any of our 3 VPN recommendations work with Twitter, both in Russia and any other country that blocks social media. We use ExpressVPN due to its lightning-fast obfuscated servers and easy-to-use apps on all platforms.

Facebook, Instagram, and Twitter have all been banned in Russia under the new "extremism law." LinkedIn has also been banned in the region since 2016 for storing Russian user data outside the country's borders.

You can, but it's not really worth the risk. Many free VPNs log and sell user data to ad networks to cover operational costs and may share it with the Russian government as well. Their slow performance, monthly data caps, and the small number of (usually crowded) servers don't help their case, either.

Need help using a VPN or accessing Twitter in Russia? Leave a comment below, and we'll be happy to help.