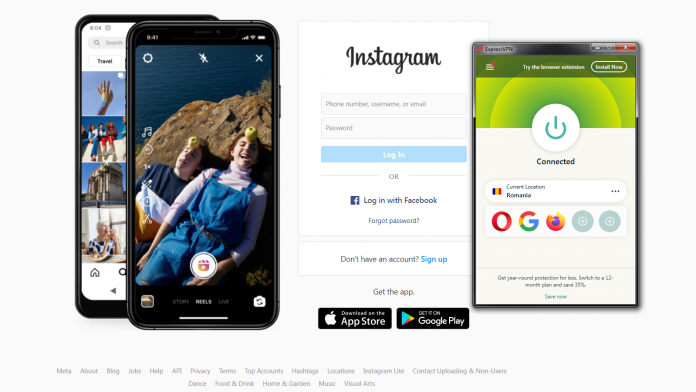 As of March 14, 2022, Instagram and Facebook have been banned in Russia under the country's new "extremism law." In essence, this move helped the government keep Russians in the dark about what is going on with the war in Ukraine. Thankfully, it's quite easy to unblock Instagram in Russia with a VPN.

A VPN allows you to access services blocked in Russia as if you were physically located in a different country. It assigns your device a new IP address while keeping your real IP (and location) hidden online.

Even better: VPNs encrypt (or scramble) your data and make it unreadable to Russian ISPs, hackers, and government surveillance. Considering ISPs share your browsing info with the Kremlin, it's a good idea to take steps to keep it private. Here's everything you need to know about how to unblock Instagram in Russia with a VPN.

How to Unblock Instagram in Russia With a VPN

It's quite an easy process to unblock Instagram in Russia with the help of a VPN. Just follow these four simple steps:

We recommend Romania, Finland, or similar countries located close to Russia. That way, you'll get the best possible speeds while watching videos, uploading pictures, or sharing stories on Instagram.

Have trouble accessing the VPN provider's website? Understandable, considering the Kremlin has been blocking VPNs that don't comply with its privacy-intrusive regulations. Check out some solutions by clicking here.

After hours of in-depth testing, we've concluded that these are the best VPNs for Instagram users in Russia.

ExpressVPN deserves the #1 spot as the best Instagram VPN for Russia for a simple reason. The provider features obfuscation on all servers, meaning your VPN activity is disguised as usual HTTPS traffic. Any Russian ISP trying to spy on your day-to-day browsing won't suspect a thing. Its built-in kill switch also ensures your identity remains safe even during disconnects.

As expected, the provider's no logs policy has been fully audited, so you don't need to worry about any of your info being stored on its network. Naturally, your traffic is fully encrypted against hackers and other online threats. ExpressVPN features the default OpenVPN encryption used by any top-notch VPN nowadays.

Of course, you can also try out its new Lightway protocol for better speeds without sacrificing security. The recently-implemented Threat Manager feature is also worth mentioning, as it blocks out harmful trackers trying to create targeted profiles about your interests. And Instagram certainly has quite a few of those.

Explore all these options (and more) in greater detail in our ExpressVPN review.

Aside from its incredibly fast speeds and strong encryption (with WireGuard support via NordLynx), NordVPN keeps zero user logs and offers stealth servers to keep your VPN activity hidden at all times, as well as bypass VPN blocks.

Just go to Settings > Auto-connect and select the OpenVPN (TCP) protocol. Then head over to the Advanced menu and toggle Obfuscated servers on. You'll find these servers on the main NordVPN "map" menu.

Not only is NordVPN a great VPN for Instagram in Russia, but its numerous security features make it a good option for journalists, whistleblowers, and anti-war critics wishing to express their opinions without fear of punishment from the Kremlin. Double VPN, malware, phishing domain filters, and anti-malware scanning on all downloaded files make it a great all-around security package.

Read more about all these features in our in-depth NordVPN review.

CyberGhost VPN offers every industry-standard feature required to unblock Instagram, Facebook, and a host of other platforms with their service, mostly focused around unblocking streaming sites like Netflix, Crunchyroll, and the likes. Since its servers are optimized for streaming video, you won't have trouble buffering Instagram memes and Stories.

Its always-on kill switch ensures you're never accidentally exposed online because you forgot to turn on the feature. On top of that, it has a built-in ad-blocker and tracker filter to prevent ad companies from profiting off your data.

Unfortunately, the provider doesn't have any obfuscation. While your ISP won't be able to tell what you're doing online, they'll still see that you're using a VPN. To compensate, CyberGhost VPN is one of the few VPNs that still have servers in Russia. This is great for ex-pats that still want to keep up with their favorite TV series back home.

Keep an eye out on our CyberGhost VPN review for all the latest updates.

Why Do You Need a VPN to Use Instagram in Russia?

Long story short, the Kremlin blocked multiple social media giants (including Facebook, Instagram, and Twitter) as they believed people were sharing propaganda aimed at demonizing the Russian army after the invasion of Ukraine.

The most reliable way to get around the Russian Instagram ban is to use a VPN to change your IP address to a different country - one without such glaring censorship problems. You'll also be able to hide your browsing activity from your ISP by encrypting your network traffic.

While prosecutors have said that it's not illegal for Russian citizens to unblock Instagram and other social media platforms with a VPN, you never know when the situation might change for the worse. After all, sharing anti-war sentiments or so-called "fake news" about the Russian military on social sites can be punished with steep fines or up to 15 years of jail time.

Keeping your browsing activity hidden from your ISP is a good way of protecting your actual livelihood against these extreme examples of censorship.

There are several essential features you should look out for during your research for the best Instagram VPN for Russia. Here they are, in no particular order:

Other useful but not completely necessary features include ad-blocking, anti-tracking, malware and phishing domain filtering, anti-malware, and Double VPN (for when you really want to cover your tracks).

With over 64 million Instagram users in Russia, the new social media ban has put quite a dent in everyone's plans. People can't share fun moments online, keep up with friends, or even maintain their online businesses thanks to the Kremlin's insistence on monopolizing the conversation around Ukraine.

Fortunately, VPNs like ExpressVPN allow you to bypass the ban with state-of-the-art encryption, obfuscation technology, super-fast servers, and a track record for quality. Don't forget you can also install ExpressVPN on a compatible router to get around device limits and better avoid detection from your ISP.

Looking for something a little different? Check out our list of the best VPNs for Russia and explore 2 more quality options (and yes, they can unblock Instagram).

Despite the service being blocked by the Roskomnadzor, using Instagram in Russia with a VPN is still perfectly legal, according to Russian prosecutors. Citizens will not be punished for unblocking Instagram with a VPN, provided they don't share or post so-called "fake news" aimed at the Russian military - which is punishable under the country's new "extremism law."

Yes, Instagram is banned in Russia, but you can still legally access the service by using a VPN to change your virtual location. The only punishment you need to worry about is sharing supposed "propaganda against the Russian military" on social media.

Surprisingly, VPNs are still legal in Russia, although providers need to comply with the Kremlin's strict regulations to operate in the country. Many major providers have pulled their servers from Russia, and the government has blocked their services within its borders. Fortunately, you can still access VPNs such as ExpressVPN through other means.

A VPN is the most reliable way to use Instagram in Russia. All you need to do is switch to a server in a country without censorship issues, and you can access Instagram, Facebook, Twitter, and a host of other tech sites banned in Russia.

What's the Best VPN to Unblock Instagram in Russia?

ExpressVPN is currently the best VPN option to unblock Instagram in Russia. It features blazing fast servers, impenetrable encryption, as well as obfuscation on all servers to keep your web activity truly hidden from Russian Internet providers.

LinkedIn has been banned in Russia since 2016, as the service would store the data of Russian citizens outside the country's borders. In 2022, the Kremlin added Facebook, Instagram, and Twitter to its list of banned social media.

You can, but a free VPN will not offer the same level of protection as a premium provider. For one, free VPNs log your browsing and location data, which is then sold off to ad networks and shared with the government. You also have to deal with monthly data caps, slow speeds, and a small number of (usually crowded) servers - all adding up to a worse Instagram experience.

Have trouble unblocking Instagram in Russia? Is your VPN provider's website blocked? Leave us a comment, and we'll be glad to help you get back on track.