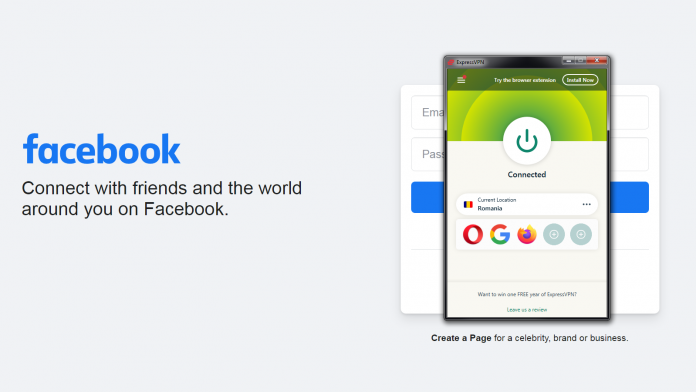 Due to the Russo-Ukrainian war that started in February this year, the Kremlin decided to block most major social media platforms (including Facebook in March 2022), among other western sites. The move wasn't unexpected, as it makes it easier for the Russian government to control what information people can see about the ongoing conflict. Luckily, you can easily unblock Facebook in Russia with the right VPN.

A VPN allows you to change your IP address to a different country, where Facebook and other services aren't banned. Moreover, VPNs encrypt your data so hackers and your ISP can't tell what you're doing online. This is essential, considering Russia has an indirect ban on VPNs. More details later on.

Before that, let's see how you can unblock Facebook in Russia with a VPN.

How to Unblock Facebook in Russia with a VPN

It's quite easy to access Facebook in Russia when you use a VPN. Here's a short guide on how to do so:

That's about it. Now you can use Facebook in Russia without any difficulty. If you run into any issues, try clearing your browser cookies (a freshly installed browser works too) or switching to a different VPN server.

Are you having trouble accessing the VPN provider's website from Russia? If the government has blocked it in an effort to curb VPN usage, then you might want to look for a mirror website or alternate download method. See our guide on how to unblock ExpressVPN's website, where we explore 3 different options.

The following 3 VPN providers have every tool you need to unblock Facebook in Russia, along with any other platform banned in the country.

1. ExpressVPN - Best All-around VPN to Use Facebook in Russia

ExpressVPN is well known for its fast servers in several countries, world-class unblocking capabilities, and for managing to evade even the most advanced VPN blocking systems (such as the Great Firewall of China). Every ExpressVPN server features obfuscation, which masks your VPN activity as regular HTTPS traffic. Russian ISPs will be none the wiser about the fact that you're using Facebook, Twitter, or Instagram.

The provider keeps zero logs of your activity, and thanks to its TrustedServer technology, any data-in-transit is wiped upon reset, keeping you safe from potential government seizures, rogue employee attacks, and similar threats. Not that the Kremlin could do anything about it since ExpressVPN has withdrawn all of its servers in Russia, as new regulations would risk their users' privacy.

Other than that, ExpressVPN has airtight leak protection and a helpful kill switch to prevent any data leaks, even during disconnections. Finally, we should mention its new Threat Manager feature that blocks intrusive trackers (even ones by Facebook).

Feel free to read through our ExpressVPN review to discover even more benefits.

As expected from a top-class Facebook VPN for Russia, NordVPN features a strict, independently audited no logs policy, RAM-based servers that regularly wipe any data, bulletproof leak protection, and a useful kill switch to preserve your privacy 24/7. You also get a built-in tracker and ad-blocking, anti-phishing filters, and anti-malware scanning with the help of NordVPN's Threat Protection.

Best of all, it features dozens of obfuscated servers while using its OpenVPN TCP protocol. Go to Settings > Auto-connect > choose OpenVPN (TCP) from the drop-down menu. Next, click on Advanced and toggle on the Obfuscated servers option. A bit convoluted for a beginner, which is why it ranks lower than ExpressVPN. Obfuscated servers are also on the slower side, so keep that in mind.

For privacy buffs, NordVPN offers advanced security features such as Double VPN, which encapsulates your data in an extra layer of encryption, and routes all traffic through multiple servers. This is an amazing option for journalists, whistleblowers, and war critics, though be warned that this will vastly affect your network speeds.

Learn more about each of these features (and more) in our NordVPN review.

While it doesn't have obfuscation, CyberGhost VPN still provides all the industry-standard features required to unblock Facebook in Russia and many other services around the globe. These include military-grade encryption, a strict no-logs policy, leak protection, an always-on kill switch, and even a built-in ad-blocker and anti-tracking feature for good measure.

CyberGhost VPN is also one of the only VPNs that still operates servers in Russia, meaning you can unblock Russian websites from abroad. CyberGhost VPN lets you get a taste of home on Russia-exclusive channels like 1TV.ru, KinoTV, and TNT if you've left the country due to the war.

For a meager extra fee, you may access its specialized NoSpy servers, all self-operated from the provider's headquarters in Romania. They are faster than their usual server fleet, and you don't have to worry about any third-party data centers handling your information.

As always, check out our CyberGhost VPN review for more in-depth coverage.

Why Do You Need a VPN to Use Facebook in Russia?

Facebook, Instagram, and Twitter have been blocked in Russia to make it easier for the Kremlin to control the narrative surrounding the war in Ukraine. To use Facebook in Russia, you'll need a VPN to change your IP address to a different country where the service isn't blocked.

On top of that, a capable VPN will encrypt your network traffic, making it virtually impossible for your ISP or hackers to eavesdrop on your online activity. While prosecutors have said that Russian citizens won't be punished for trying to access Facebook with a VPN, people can still get in trouble for "disseminating intentionally fake news about the Russian military." Punishments range from steep fines to jail terms of up to 15 years.

While anti-war sentiments are commendable, we recommend you only use a VPN to access Facebook from Russia. Even vague, mild criticisms (e.g., "war is bad") could be met with harsh penalties from Russian courts. Stay safe!

Want to do your own research and choose a more fitting VPN to unblock Facebook in Russia? Here's what features you should look for:

Additional features such as blocking ads and trackers, Double VPN, built-in anti-malware, or phishing site blockers aren't necessary for gaining access to Facebook in Russia, but they add a nice layer of privacy and security to your daily browsing sessions.

Want to keep up with friends and family on Facebook and check up on their safety? Were you using Facebook for business before it got blocked, and now you're locked off from your clients? In that case, a VPN is the way to go.

As mentioned previously, Russia has a blanket ban on VPNs that do not respect its privacy-intrusive regulations. Fortunately, providers such as ExpressVPN help you evade detection from Russian ISPs through impenetrable encryption and fast stealth servers that can vault even the Great Firewall of China.

Check out our list of the best VPNs for Russia for 2 extra options you can try.

While Russian courts have banned Facebook and Instagram under a new extremism law, prosecutors have said they will not charge citizens and organizations that use VPNs to access the 2 social media sites in Russia.

Yes, Facebook and Instagram have been banned in Russia under a so-called "extremism law." However, Russian citizens that continue to use Instagram or Facebook with a VPN will not be punished under the law.

While VPNs are still legal in Russia, providers need to comply with Russia's restrictive regulations. Those that do not comply are effectively blocked, making it an indirect ban on most major VPN providers. That said, you won't get in trouble if you manage to use one of these blocked VPNs.

Absolutely. Russian prosecutors have mentioned that citizens will not be charged for using a VPN to unblock Facebook under their new extremism law. Wondering what to do if a provider's site is blocked in Russia? Please see our alternative methods to download ExpressVPN for mirror sites and more techniques to evade the VPN ban.

What's the Best VPN to Unblock Facebook in Russia?

ExpressVPN is the best option if you plan to use Facebook in Russia and other countries that block social media sites. All servers use obfuscation, so your VPN traffic is masked, making it more viable in countries like Russia that ban VPNs for not complying with the government's stringent regulations.

Is NordVPN Blocked in Russia?

NordVPN is one of the few VPNs that still work in Russia after the blanket VPN ban by the Kremlin. Its apps feature obfuscated servers you can use to hide your VPN activity from your Russian ISP, as well as strong encryption with OpenVPN and NordLynx. Naturally, it works with Facebook too.

The most notable social media sites banned in Russia (as a result of the war in Ukraine) are Instagram, Facebook, and Twitter. LinkedIn has also been blocked in Russia since 2016, as the service stores the user data of Russian citizens outside the country.

VKontakte (also called VK) is currently the largest Russian social media platform that could be considered an alternative to Facebook, with over 72 million active users in Russia as of 2021. OK.ru comes in second, but with just over 33 million users, it's nowhere near close to VK in terms of popularity.

You can, but there are several dangers linked to using free VPNs that you should be aware of. For one, free VPN providers log and store user data, which is likely to be shared with the Russian government and sketchy ad agencies. Next, many free VPNs contain malware or may even leak your data online in extreme cases. Probably not worth the trouble just to use Facebook.

Have trouble unblocking Facebook or other services in Russia? Leave a comment down below, and we'll be happy to troubleshoot any issues.