How to Watch BBC iPlayer in Italy for FREE in 2022 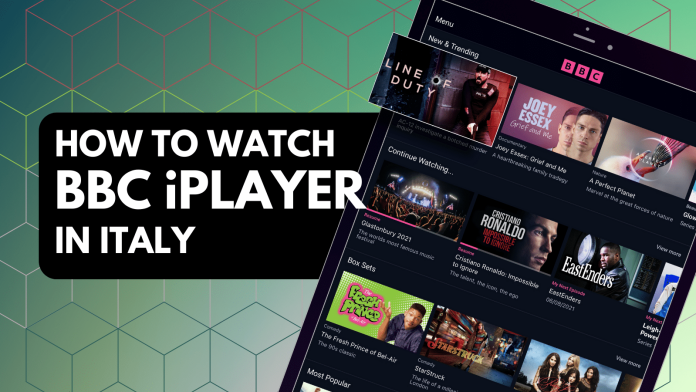 BBC iPlayer is a hugely popular UK streaming service that allows you to watch content live, as well as on-demand movies and TV shows. However, only people in the UK can access this streaming platform, by default. That said, if you want to stream BBC iPlayer in Italy, you will have to bypass this geo-restriction.

The trick to bypassing iPlayer’s geo-block in Italy is to use a VPN. Since your location is visible to websites and streaming services through your Web connection metadata, you need to change your virtual location to access BBC iPlayer.

That’s what VPN services can do, as they change your IP address. So, once you connect to a server in some other country, you also get that country’s IP address.

However, there is much more to VPNs than changing locations. Namely, a VPN can protect your identity online, provide complete anonymity, and more.

So, without further ado, let's begin!

Why Do You Need a VPN to Watch BBC iPlayer in Italy?

You need a VPN to watch BBC iPlayer in Italy because it’s the most reliable and safest way to get a UK IP address. Without a UK IP address, you won't be able to access iPlayer.

If you open BBC iPlayer's website without a UK IP address (like you do from Italy), you’ll be able to see all its content. However, when you try to watch a certain TV show or channel, you will encounter the following message: "BBC iPlayer only works in the UK. Sorry, it's due to rights issues."

Even if you access iPlayer via a different browser or Incognito mode, you will still meet the same issue because your location will still be visible. Thus, you need to change your virtual location to successfully unlock BBC iPlayer content.

With a VPN, you can change your location by connecting to a server based in the UK. That way, you will get a UK IP address and get access to BBC iPlayer.

However, not every VPN works with iPlayer. So, when choosing a VPN, get a powerful one to unblock the content successfully.

You can find out which are the best VPNs on the market via our best BBC iPlayer VPN guide. However, if you want to cut to the chase, we recommend ExpressVPN for streaming BBC iPlayer in Italy since it is our #1-rated VPN.

How to Watch BBC iPlayer in Italy for FREE

You need to connect to a UK VPN server to get BBC iPlayer in Italy. The whole process is simple and includes the following steps:

How to Register for BBC iPlayer in Italy?

You can register for BBC iPlayer in Italy through its official website, even without using a VPN service. Here are the steps you need to take:

What Can You Watch on BBC iPlayer from Italy?

On BBC iPlayer, you can watch a wide array of live TV channels, on-demand movies & shows, and sports channels. You can watch whatever you like, from Italy, free of charge.

Here is the complete list of programs you can watch on BBC iPlayer in Italy:

Also, you can choose from many TV shows, both older and brand-new titles. Some of the most popular ones include:

Can't Access BBC iPlayer in Italy with a VPN? – Try This!

If you're having issues accessing BBC iPlayer in Italy with your VPN, you can first try switching to another UK server. Here’s what else you can try:

Can I Watch BBC iPlayer in Italy with a Free VPN?

No, you can’t use BBC iPlayer in Italy with a free VPN. That’s because free VPNs can’t bypass strong Web-based geo-restrictions as premium VPNs can.

Streaming services like BBC iPlayer have strong proxy detection technology in place and can easily detect and block people using them from restricted countries. To bypass that technology, you need a capable VPN with powerful unblocking capabilities and many UK servers.

On top of that, your chosen VPN should bring fast speeds. After all, media streaming requires a lot of bandwidth, especially iPlayer with its HD content. That’s simply not something a free VPN can provide, often leading to a frustrating experience.

Our guide to the best free VPN for BBC iPlayer will help you make the right choice. You can still go for a premium VPN that way, but you can minimize financial risks. Use the provided link to learn more.

Since it’s only available for UK citizens, you need to use a VPN if you want to watch BBC iPlayer in Italy. A VPN allows you to connect to a UK server and get a British IP address. That way, you can freely use BBC iPlayer in Italy and watch whatever you want.

However, not all VPN providers can unlock iPlayer's content. That is why we recommend ExpressVPN. Not only can it easily unblock iPlayer, but it also has many UK servers and is the fastest VPN on the market.

ExpressVPN is suitable for anyone who wants to watch BBC iPlayer abroad, not just in Italy. So, even when you’re traveling, you can use it to watch your favorite iPlayer content.

Is BBC iPlayer Available in Italy?

No, BBC iPlayer is not available in Italy. Only UK citizens can access it by default. However, you can stream BBC iPlayer in Italy with a VPN.

Does BBC iPlayer Work in Italy?

No, BBC iPlayer does not work in Italy. It only works in the UK. However, you can watch iPlayer content by getting a UK IP address via a VPN.

Is It Legal to Watch BBC iPlayer in Italy with a VPN?

Yes, using a VPN to watch BBC iPlayer in Italy is legal. Using VPNs is legal in most countries, and millions of people use them daily.

Can I Download the BBC iPlayer App in Italy?

No, you cannot download the BBC iPlayer app in Italy because it is only available for UK users.

However, you can download it on your Apple device if you have an Apple ID associated with a UK address. If you have an Android device, you can sideload it. And on other devices, you can use iPlayer’s website.

That concludes our guide on how to watch BBC iPlayer in Italy. If you have any questions, let us know via the comments section below. Thank you for reading!