uTorrent Not Working With ExpressVPN? – Here’s Everything You Can Do to Fix That Problem! 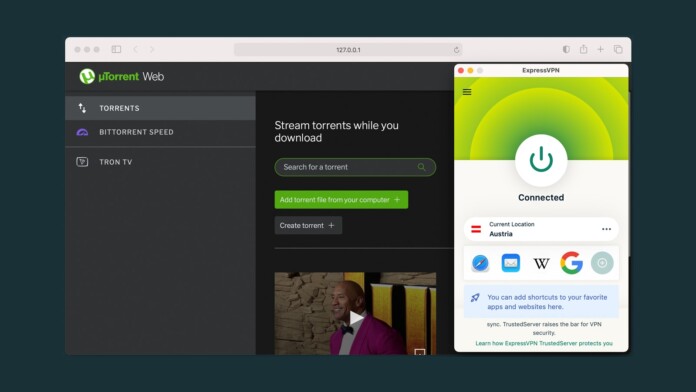 As you already know, VPNs present the best way to download torrents anonymously. They don't require extensive tinkering to safeguard your P2P traffic, as they work entirely in the background. However, things can go wrong on occasion. With that said, we understand your frustration if uTorrent isn't working with ExpressVPN in your case, and we're here to help.

In this guide, you'll find a series of quick solutions to various problems that might cause uTorrent to stop working with ExpressVPN (which doesn't happen that often, in all honesty). And don't worry, we won't ask you to do any complicated or highly technical operations.

Unable to Download Torrents via uTorrent When ExpressVPN is ON? Try These 7 Quick Fixes!

The following recommendations will ask you to take a closer look at both uTorrent and ExpressVPN, tinkering with their settings and similar. We've also provided plenty of tips for downloading P2P files safely, so make sure to pay close attention.

We highly recommend using ExpressVPN’s kill-switch, especially when tinkering with this VPN while downloading torrents. So, make sure to open ExpressVPN’s settings and select the 'General' tab. From there, check the box next to ‘Network Lock.’

In our article on the best VPNs for torrenting, you'll see us calling ExpressVPN "the best VPN for torrenting in 2021." And yes, we still firmly believe in that statement. That's because this VPN doesn't offer only a group of P2P-optimized servers. Instead, all of its servers are optimized for downloading torrent files, which simplifies this whole situation.

However, there's something important to keep in mind. Just because all of ExpressVPN's servers are optimized for P2P, you may still encounter servers that don't perform optimally for P2P Web traffic. There could be several causes for that, so here's how to switch to a different server and possibly resolve your problem with uTorrent not working with ExpressVPN.

2. Switch to Another (P2P-Friendly) VPN Protocol

By default, ExpressVPN is set to use an 'automatic' (or 'recommended') protocol. Even though the VPN application typically decides to use OpenVPN, that’s not always the case. Therefore, we recommend picking a different VPN protocol manually, which is even more important when dealing with torrent files.

Luckily for us, ExpressVPN offers a wide range of VPN protocols, so you'll have options to choose from on just about any platform. To fix uTorrent's problems with ExpressVPN, you'll want to do the following.

3. Reinstall or Update the ExpressVPN App

If you’ve updated ExpressVPN recently, that might be the reason why you’re unable to download torrents via uTorrent. Keep in mind that VPNs are highly technical applications, so problems may arise when updating them. For additional info, here's how to fix issues with ExpressVPN if it won't connect after an update.

In this case, the solution would be to reinstall ExpressVPN (once you completely remove the existing version from your computer). However, know that this will return ExpressVPN to its "factory-settings," so make sure to spend some time reconfiguring it.

If you need help with setting up ExpressVPN, we have a range of detailed guides published on TechNadu. So, here’s how that is done on Windows, macOS, Linux, Chromebooks, Amazon’s Fire TV Stick, Android, and iOS.

Both torrent clients and VPN applications can be "blacklisted" by cybersecurity software, mostly because they tend to change your Internet connection’s settings. With that said, we’ve seen situations with uTorrent being flagged as a threat by antivirus providers, and similar things happened with VPNs as well.

Therefore, the reason why you can’t download torrents via uTorrent and ExpressVPN might be found in your antivirus, firewall, or other types of cybersecurity tools. Our recommendation is to take a very close look at your antivirus or Internet security suite and see if you can lower its 'security protection level' from 'High' to 'Medium.'

Check your cybersecurity software for any other options as well, perhaps allowing you to add exemptions to their real-time protection (so you can 'whitelist' both uTorrent and ExpressVPN).

You probably know that uTorrent is an incredibly flexible torrent client. It comes with a comprehensive settings panel, letting you fine-tune each aspect of your P2P connectivity. So, if you're facing problems downloading torrents via uTorrent, perhaps it's time to take a second look at those settings.

You can do plenty to customize this application, so we won’t get into various details in this article – because we have a separate guide on optimizing uTorrent for safety and speed. Make sure to use the provided link and learn more.

As an alternative, you can also try other torrent clients. Our team has produced guides on the most popular options right now, so here are the best torrent clients (overall) in 2021.

At the moment, uTorrent provides two applications. We all know and love 'uTorrent Classic,' which has been around for quite some time. However, 'uTorrent Web' was released a couple of years ago, promising to replace its older sibling. This latest torrent client works inside your favorite Web browser, comes with a simple interface, and without any distractions.

With that said, we do recommend keeping both uTorrent Web and uTorrent Classic up-to-date at all times. However, this has become difficult on some operating systems (like on macOS, for example), where uTorrent Classic no longer supports the latest macOS version (it has already been replaced by uTorrent Web).

7. Disable IPv6 on Your Windows or macOS Computer

Lastly, we have one more (technical) tip. If your ISP already supports IPv6, there could be a conflict between your Web connection and your VPN. More precisely, ExpressVPN supports IPv4 as of right now, so it automatically "translates" your Internet data through its IPv4 tunnel.

In other words, we recommend you disable IPv6 on your computer (if your ISP supports that protocol). That would prevent P2P-related leaks and resolve technical problems, including issues with uTorrent working with ExpressVPN.

So, here's how to disable IPv6 on a Windows computer.

Of course, we won't forget our readers using macOS. With that said, here’s how to disable IPv6 on any Mac computer.

This is where we conclude our (hopefully helpful) guide to fixing issues with uTorrent not working with ExpressVPN. If there’s anything you’d like to say or ask, feel free to post your comment below. And lastly, thank you for reading!