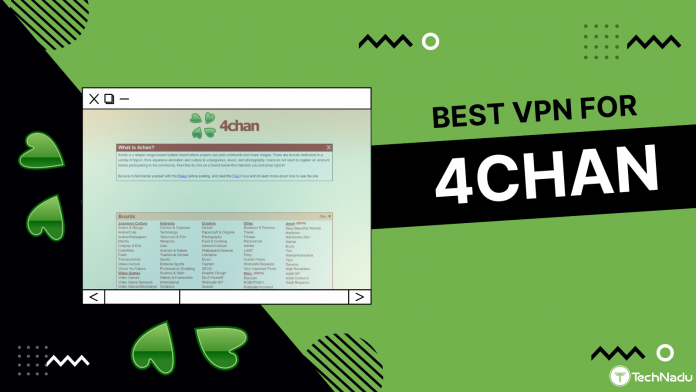 4chan is an online imageboard infamous for all the far-reaching shenanigans its users have been involved in over the years. As a result of repeated abuse, many IP ranges and Internet providers have been banned from 4chan, and ISPs in various countries have also blocked the site. The best way to bypass these bans is with one of our recommended VPNs for 4chan.

This is what the 4chan ban screen typically looks like:

Since the imageboard is anonymous, all of these bans are IP-based. As such, all you need to do is change your IP address with the help of a VPN. Not only does the VPN assign you a different IP, but it also encrypts your network traffic. In other words, it keeps your online activity hidden from your ISP and keeps you safe against man-in-the-middle attacks and similar cyber threats.

Here's a short guide to get you started on how to unblock 4chan with a VPN.

How to Bypass 4chan IP Ban with a VPN

Unblocking 4chan with a VPN shouldn't take you more than a few minutes - just follow the steps below:

As mentioned, 4chan has banned quite a few ISPs and IP ranges (including VPN ones). Although it can get annoying, you may need to go through multiple servers until you find one that works.

The best 4chan VPN should have a fast, extensive network, with servers in countries where every ISP isn't already on their blocklist. The more, the merrier, since VPNs tend to end up on said blocklist. Other essential features include military-grade encryption, a strict no-logs policy, a kill switch, and optionally split tunneling if you don't want all your traffic going through the VPN.

Based on years of testing out various providers, we believe these are the 5 best VPNs for 4chan at the moment:

ExpressVPN offers everything you need to dodge the almighty banhammer and keep you safe online on 4chan or any other website, with blazing fast servers, military-grade encryption, a strict no logs policy, a kill switch, and a helpful split tunneling feature. The latter lets you use 4chan with a VPN while excluding all other traffic and improving speeds.

Meanwhile, its Threat Manager blocks intrusive trackers from creating ad profiles based on your browsing habits. It may seem obvious, but 4chan ads don't really come from the most "trusted" ad networks out there.

Every ExpressVPN server has built-in obfuscation to hide your VPN activity from your ISP and 4chan. This should help you access the site even on college or work Wi-Fi, or other places where the network admins are a buzzkill. It also helps you unblock numerous streaming services from around the world.

Go check out our ExpressVPN review for the full scoop.

NordVPN should be your first pick if you're focused on staying safe online. First off, you get the usual privacy-focused features - such as bank-grade encryption, an independently audited no logs policy, obfuscated servers (while using OpenVPN), and a kill switch.

What takes NordVPN to the next level is its Threat Protection feature, which blocks ads and tracking, filters malware and phishing domains, and even scans downloaded files for viruses and other threats. There have been quite a few reports of malvertising on 4chan, so it's good to have an extra line of defense while sifting through the boards for a quality thread.

Other than that, NordVPN is a great pick for streaming, letting you browse Netflix libraries from other countries, unblock region-exclusive sites like BBC iPlayer, and more. Read up on everything in more detail in our NordVPN review.

Security-wise, you have everything you need here - from strong encryption to built-in ad and tracker filtering. Its built-in kill switch is always-on, so you never have to worry about being banned during a random disconnect. CyberGhost VPN keeps no user logs and releases frequent transparency reports to show its commitment to protecting your privacy.

Unfortunately, it doesn't have any obfuscated servers, so users in China, the UAE, and similar countries are out of luck. They have so-called NoSpy servers, self-operated by the provider in Romania. For a small fee, you get faster speeds and don't have to worry about third-party data centers handling your private info.

CyberGhost VPN has servers worldwide, thus increasing your chances of finding one that works on 4chan. The provider also features streaming-optimized servers and works with over 40 different services - from Netflix and Crunchyroll to Hotstar and Comedy Central.

As always, take a look at our CyberGhost VPN review for the full details.

Surfshark looks at the measly device limits of other providers and says "no." Sign up, and you can link any number of gadgets to a single account, which is great for sharing with the family to unblock various streaming services or friends that might've been banned on 4chan.

Furthermore, its Camouflage Mode allows you to hide your VPN usage, especially in more restrictive countries like China. Surfshark is also one of the few VPNs with GPS spoofing on Android, which prevents apps from tracking your location in the background.

Naturally, you get all the industry-standard security options with Surfshark, including ad-blocking, tracker filtering, and phishing domain filtering with its CleanWeb option. Learn more about it and other features in our complete Surfshark review.

If you feel like a VPN subscription just for 4chan isn't a worthwhile investment, Ivacy has you covered with some of the most affordable plans in the industry. And for that price, you get to connect up to 10 different devices, get decent speeds, and access to many geo-blocked streaming sites.

Moreover, you gain access to over thousands of servers worldwide, which is ideal for evading bans on 4chan. Its apps come with all the security options you're used to by now, from powerful encryption to a robust no-logs policy.

Sadly, its kill switch and split tunneling features are currently exclusive to Windows and Android. Not a total deal-breaker by any means, but something to consider anyway. Head to our in-depth Ivacy review for more info about the provider and its apps.

Why Do You Need a VPN for 4chan?

4chan is quick to dish out (sometimes unnecessary) bans. Moreover, the site has completely blocked out many ISPs due to persistent spam and other user violations within their IP ranges. Users with dynamic IPs may find themselves banned for a different user's behavior.

Whatever situation you find yourself in, a VPN will let you change your IP address and evade any 4chan ban. Plus, your browsing history will remain a secret - there is no need to share what you do with your ISP or other eavesdroppers.

Outside 4chan, a VPN will let you unblock various streaming sites, including international Netflix and Crunchyroll libraries, BBC iPlayer, and more. Something caught your eye in a recommendation thread on /a/ or /tv/, but is unavailable in your region due to licensing issues? Change your location with a VPN, and you're good to go.

There are many ways you could get banned on 4chan, sometimes even when you aren't to blame. Avoid all the hassle and use a VPN to hide your IP, evade bans, and unblock the website at school, work, and other public networks that (understandably) don't want anything to do with 4chan.

Our #1 recommendation is ExpressVPN, thanks to their vast server network, built-in obfuscation that allows you to mask your VPN usage, and the ability to unblock many streaming services. The fact that it blocks (sometimes harmful) ad trackers is a neat bonus too.

Want to explore other options? Then check out our list of the 15 best VPNs overall - it has a little something for everyone.

Are VPNs Banned on 4chan?

According to the 4chan FAQ section, "posting from proxies or VPNs is not allowed." If caught, you'll usually get a "Proxy/VPN" ban, which can be easily evaded by simply switching to a different server.

Yes, the 4chan FAQ specifically says that posting from proxies or VPNs is not allowed and frequently block VPN IP ranges. Luckily, you can easily evade the banhammer by switching servers (although it may take a few tries to find a working one).

Do VPNs Work on 4chan?

Although 4chan blocks VPNs, most premium VPNs (such as ExpressVPN) stay one step ahead and provide a constant flow of fresh IPs for their users. Just select a different server from your provider's list, and you're good to go.

Yes, VPNs can help you bypass a 4chan IP ban by simply changing your IP address to a different one based on the server you connect to. For example, a user from the United States can obtain a French IP by connecting to a server in France.

Can You Use a VPN with 4chan Pass?

4chan Pass allows users from blocked IP ranges and countries to continue using the site, on top of getting rid of CAPTCHA verification when posting. That said, 4chan Pass won't let you bypass regular IP bans due to rule violations - so you'll still need a 4chan VPN in that case. VPNs are also not allowed on 4chan, so you might as well skip out on the Pass if you plan on using a VPN as well.

Which VPN Is Best for 4chan?

Right now, ExpressVPN is the best VPN for 4chan for a few different reasons. The main one is that the provider has thousands of lightning-fast servers in countries worldwide, allowing for a wider range of locations to choose from. On top of that, all servers feature obfuscation by default, making it more difficult for 4chan or your ISP to see that you're using a VPN.

How Do I Get Around 4chan VPN Ban?

"You've been banned for the following reason: Proxy/VPN." You may see this dreaded message (and a goofy Yotsuba) for 2 reasons. One, 4chan determined you're using a VPN, proxy, or TOR and banned you. Or two, your current VPN server was already on the 4chan blocklist, to begin with. The solution? Just pick a different server from your provider's list.

Does ExpressVPN Work on 4chan?

ExpressVPN is an amazing VPN choice for 4chan. Powerful servers let you dodge banhammers, while built-in obfuscation makes it harder to unmask your VPN activity - whether it's by 4chan, your ISP, or any other eavesdroppers. It also has a kill switch to prevent accidental bans during disconnects, plus split tunneling if you want to exclude other apps and websites from the VPN tunnel (for extra speed).

Does NordVPN Work on 4chan?

Yes, NordVPN is a solid choice if you want to circumvent 4chan bans. Great speeds, thousands of servers, a kill switch, split tunneling, and even obfuscated servers if you want to access 4chan from a country that frowns upon VPN usage (say, Russia or China). Threat Protection also blocks intrusive ads, trackers, phishing, and malware sites and scans for actual malware in any files you download.

How to Evade 4chan Ban on Phone?

All of our recommended 4chan VPNs have easy-to-use apps for Android and iOS. You can even evade a 4chan ban while using a mobile data connection. Although, keep in mind that this will use slightly more data than average due to the encryption overhead.

Can I Use a Free VPN on 4chan?

You can, but 4chan consistently blocks free VPNs due to spammers, trolls, flamers, and others using them to get around IP bans. Even premium VPNs are affected by these blocks, although they can afford to get fresh new IPs for their users more frequently. Free VPNs are also unsafe, so keep that in mind if you plan to use one on 4chan.

Need any other info about unblocking 4chan with a VPN? Let us know in the comments below!