ExpressVPN Not Working on Android? – These Are the Most Effective Fixes Right Now! 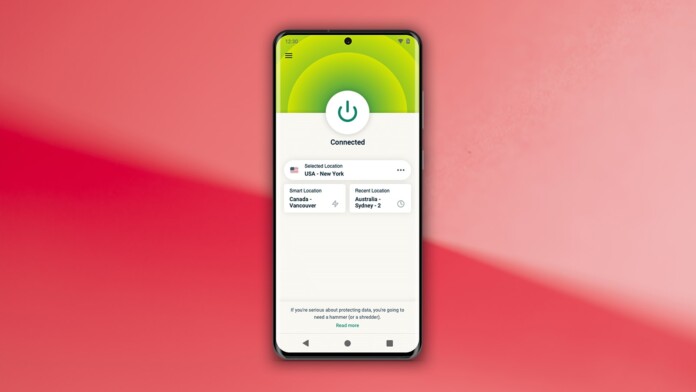 For the most part, ExpressVPN works without any issues on Android – even without tinkering with its settings. However, highly powerful VPNs such as ExpressVPN are backed by high-end technologies, so things can go wrong on occasion. With that said, if you've experienced issues related to ExpressVPN not working on Android, we've here to help.

Our team has put together a group of quick and easy fixes, helping you regain your online anonymity and resolve issues with ExpressVPN on Android. And don’t worry, as we won’t ask you to do any deeper-level changes, like rooting your device. We’ll stick to easy solutions that have proven to work in the past.

Perhaps you have a hard time logging in to ExpressVPN, or you can't manage to achieve a stable VPN connection. The cause of ExpressVPN not working on your Android could be in the app itself or your operating system's limitations. Here's what you need to do.

Are you 100% sure that ExpressVPN is to blame for your Internet connectivity issues? Considering that VPNs such as this one come with unlimited resources, many of us tend to use them at all times (in the background). With that said, you could take a step back and recheck if your Web connection works properly (without the VPN) in the following way.

2. Having a Hard Time Logging Into ExpressVPN?

To log in to the ExpressVPN app on Android, you need to supply your email and password. This is typically a straightforward procedure that takes no more than a few seconds. However, if you're on a restricted network (we've seen that happen on Google's Fiber network), you might have a hard time even getting into the ExpressVPN app.

The trick to resolving this issue is to switch to your carrier's mobile data. In other words, disconnect from your Wi-Fi network (or disable Wi-Fi altogether, temporarily) and switch to mobile data for a while. Then, try logging in again. Once you get to ExpressVPN's home screen, feel free to enable Wi-Fi again and use the VPN as you normally would.

We're sure that you have a group of favorite VPN servers, which you use often. ExpressVPN helps you with that by pushing you to use nearby servers, as well as to make lists of favorites. However, VPN servers can face technical issues or encounter congestion issues (remember that ExpressVPN is one of the most popular VPNs out there, used by millions).

With that said, if ExpressVPN doesn't work on Android in your case, you might want to switch to a different server. To do that, go through the following steps.

4. Have You Tried Using a Different VPN Protocol?

This piece of advice goes hand-in-hand with the previous recommendation. However, instead of trying different servers, you might want to try a different VPN protocol. Keep in mind that each VPN protocol dictates how you connect to the Internet, and each comes with its own set of servers.

Due to those reasons, changing a protocol can often be a possible solution when ExpressVPN stops working on Android. With that said, here’s what you need to do.

5. Have You Updated Your Android OS & ExpressVPN?

Using the latest Android version paired with the latest ExpressVPN version, you're making sure to avoid technical issues. Know that ExpressVPN is a fast-evolving VPN app, with new updates being released regularly. They follow Android's updates as well, often bringing security patches and cybersecurity refinements.

With that said, we highly recommend updating both your Android OS and your ExpressVPN app. Updating Android is typically done with the Settings app (Settings > Software Update), and you can update ExpressVPN by visiting Google’s Play Store.

If you've updated ExpressVPN recently, and if you believe that update might be causing an issue, you’ll need to adjust your troubleshooting efforts. Here’s what to do if ExpressVPN fails to work after an update.

6. Do You Use Other VPNs & Antivirus/Firewall Apps?

ExpressVPN doesn’t recommend having more than a single VPN app on your Android device. That could create a software conflict, or even more worrying – that could lead to your personal information leaking on the Web.

Keep in mind that VPNs come in several forms on Android. You can install any VPN app from Google’s Play Store, or you can set-up a VPN connection manually (usually done via the Settings app). So, checked whether you have more than a single VPN set up. And if you do, remove any other apps and leave ExpressVPN to be your only and primary VPN.

The same applies to antivirus/firewall apps. We all know that Android has a problem with adware, spyware, and other types of malware. However, keep in mind that cybersecurity apps can cause ExpressVPN to stop working on Android. So, either pick a reputable antivirus (that lets you add exceptions to its real-time scanning) or stay away from shady apps altogether.

Recent versions of Android come with built-in battery optimizations. This mobile operating system now comes with software measures to control how individual apps work. More precisely, Android can disable certain features of individual apps, which might cause ExpressVPN to stop working on your smartphone or tablet.

With that said, you'll need a guide on how to disable ExpressVPN's battery-saving measures, ensuring that no disconnects happen. And while tinkering with your device's settings, feel free to enable a feature called 'Always-On VPN.' For detailed steps, turn to our guide on stopping your Android from disconnecting from a VPN.

We always recommend going with ExpressVPN's native Android app. That's the best way to get everything this VPN offers in a convenient package. However, if ExpressVPN doesn't work on your Android, it's time to think of another solution.

You should know that there are different ways to run a VPN connection on your Android device. Based on a protocol that you'd like to use, you can use an open-source third-party app or set up ExpressVPN via your Settings app. Here's what you need to know.

This is where we end our guide on what to do if ExpressVPN fails to work on Android. If you have any questions or doubts, make sure to post your comment below. And finally, thank you for reading!