CyberGhost VPN Free Trial vs. Paid Subscriptions (2021) – What’s the Difference & What Do You Get? 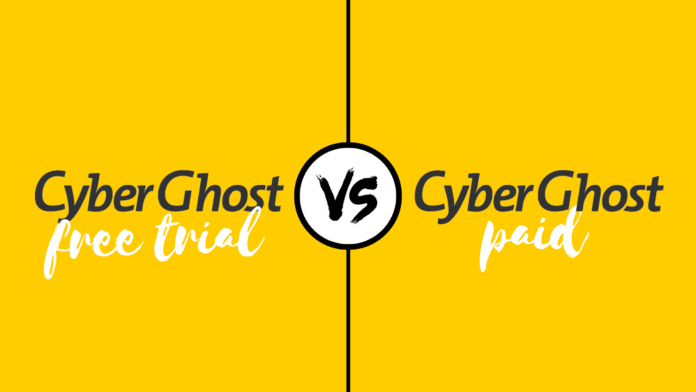 Before committing to a VPN service, it's always a good idea to test it. However, you won't find too many hugely popular VPNs that also offer free trial accounts. Luckily for us, CyberGhost isn't one of those VPNs, as it gives you few ways to test-drive it without imposing any rigorous restrictions. With that said, we wish you a warm welcome to our CyberGhost VPN free trial vs. paid subscriptions comparison!

Before going further, know that CyberGhost VPN offers free trials on both desktops (limited to 24 hours) and mobile devices (limited to 7 days). However, if you decide to pay for this VPN straightaway (bypassing its trial), you'll still be entitled to a 45-day money-back guarantee. As you can see, getting this VPN subscription or trial account comes without any risks.

Still, when comparing CyberGhost’s free trials and paid subscriptions, things can get somewhat complicated. We’re here to explain all you need to know, so let’s jump right in!

In case you’d like to take a much deeper dive into this VPN’s features and capabilities, make sure to read our hands-on CyberGhost VPN review.

Join us as we explore our CyberGhost VPN free trial vs. paid subscriptions comparison, helping you decide on the best way to invest your money and time. Here’s all you need to know.

First, let’s check the platforms and devices covered by CyberGhost’s free trial. Then, we’ll compare those to what’s included in the VPN’s regular subscriptions.

SUMMARY: It's great that CyberGhost VPN offers a free trial, but it is pretty limited in how you can use it (as you can only use it on a single device). If you want to try the VPN on multiple devices, you'll need to use a different email account for each of those.

You’re probably wondering what VPN features you’ll get via CyberGhost’s trial? That’s precisely the focus of this segment of our CyberGhost VPN free trial vs. paid subscriptions comparison.

SUMMARY: In general, CyberGhost VPN gives full access to both trial accounts and paid subscription holders. However, since the VPN's trial can only be used on a single device, you will probably miss out on some platform-specific features (until you get the VPN's full subscription).

This is one of the VPNs with the biggest number of servers, having an extensive network that spreads across the entire world. So, here’s what kind of access to that network you can expect.

SUMMARY: No matter if you decide to opt for CyberGhost VPN’s free trial or pay for its subscription, you’ll get full access to its server network. The only limit you’ll encounter will be the duration of your trial account (24 hours or 7 days).

This segment of our comparison between CyberGhost’s free trial and paid subscriptions focuses on data and speed limitations. Here’s what you need to know.

SUMMARY: If you decide to try CyberGhost VPN for free, you won’t encounter any data or speed limitations. The VPN will offer you its full performance, which is also what paid subscribers will receive.

CyberGhost is featured in our guides on the best VPNs for streaming, live sports streaming, and torrenting. However, let’s see if that applies to its free trial as well.

SUMMARY: If you’re worried about CyberGhost’s media streaming or torrenting performance, know that you’ll get a hugely capable VPN. In that sense, jumping straight into this VPN’s subscription comes without any risks, we can assure you.

CyberGhost is a fully automated VPN that requires very little input on your part. However, when things go wrong, here's what to expect.

SUMMARY: In general, don't expect to encounter any issues with CyberGhost. Still, there might not be enough time to react during CyberGhost's 24-hour trial if something unexpected happens.

And lastly, let’s check the current pricing structure of CyberGhost VPN, including how much and when you’ll need to pay.

SUMMARY: It's true that CyberGhost's trial doesn't cost a dime – if you test it on your computer or if you cancel your subscription before the trial is up (on a mobile device). However, paid subscriptions come with generous money-back guarantees, with no risk involved whatsoever.

In the End – Worth Getting CyberGhost’s Trial? Should You Pay Straight Away Instead?

We get it – our CyberGhost VPN free trial vs. paid subscriptions comparison might be overwhelming at times. So, to summarize everything said above, we’ll compare only the most prominent aspects, which you can see in the table just below.

If you want to jump into everything this VPN offers, you should go ahead and subscribe to CyberGhost VPN straight away. That will get you the VPN's full set of features across all of its devices. And you'll still get your money back if you change your mind.

That would be all for your CyberGhost VPN free trial vs. paid subscriptions comparison. If you have any questions, let us know via the comments section below. Thanks for reading!