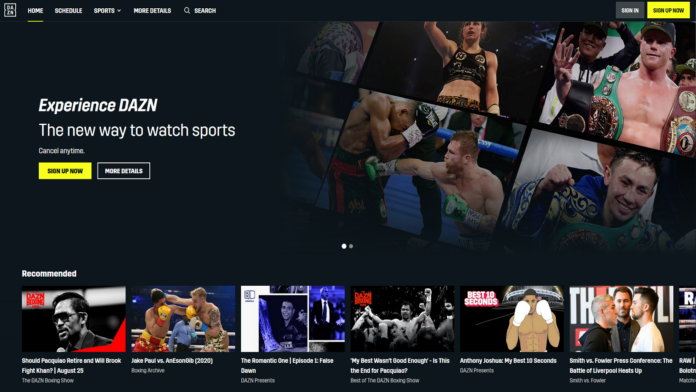 DAZN is a great platform to keep up with all your favorite teams and athletes. The only problem? Irritating geo-restrictions. Nothing worse than not being able to watch your favorite sports or missing important events because of some licensing issues. The best way to avoid the problem is to use one of our recommended VPNs for DAZN to change your online location.

Once you select a country in the VPN app, you'll gain access to sporting events licensed in the region. For example, you can catch Bundesliga and NBA matches by switching to a German, Austrian, or Swiss VPN server.

After testing out dozens of providers, we believe these are the 5 best VPNs for DAZN you can find out there.

ExpressVPN consistently tops everyone's "best of" lists, and it's no different when it comes to DAZN. It has compatible apps for all major platforms, including Windows, macOS, Linux, iOS, Android, and many more. You can live stream or watch on-demand sporting events on any of your devices without a hitch.

Install ExpressVPN on a VPN router, and your entire household will use a VPN connection - then you won't need to bother with multiple setups. On top of that, you'll be able to stream geo-restricted content on game consoles and other devices that don't natively support VPN.

The ExpressVPN app is also easy to use, with a clean interface that's perfect for beginners. Their 3,000+ lightning-fast servers are spread across 94 countries ensure, meaning you have plenty of options when streaming sporting events from all around the world.

Finally, you're welcome to use their helpful 24/7 live chat if you ever run into any issues or have other questions about their service. Be sure to check out the full ExpressVPN review for more details about the provider and its features.

Yes, CyberGhost VPN has specialized servers to stream content on platforms like Netflix (US, DE, and FR), BBC iPlayer, Crunchyroll, Hulu, and YouTube. As such, it's not surprising that their app is a good fit for streaming sporting events, even if their servers are not optimized expressly for DAZN.

With powerful servers littered across 91 countries, you'll have an easy time finding a place to stream championship matches, local events starring your favorite team or athletes, and more. And with so many servers at your disposal (7,000+), the risk of landing in an overcrowded server is minimized as well.

A neat bonus is CyberGhost VPN's ability to block annoying ads while you browse the Internet. The same feature blocks malicious domains (including phishing sites that could steal your data). Learn more about their app features and specs by reading our full CyberGhost VPN review.

3. Surfshark - Stream DAZN on All Your Devices

Don't have a compatible VPN router? No problem. Surfshark lets you install and use their app on an unlimited number of devices. All for the price of a single subscription. If your friends are also sports fans, you can basically chip in for a long-term Surfshark subscription that will unlock the complete DAZN offering.

Naturally, Surfshark also works with all the major streaming platforms out there, from Netflix to Amazon Prime Video and Disney+. They only have servers in 65 countries for the time being, but they're still a relatively new service, and we have no doubt they'll be expanding in the near future.

And if you hate ads (who doesn't), you'll be happy to hear that Surfshark's CleanWeb feature blocks them quite reliably. Not to mention that it keeps all your devices safe from malware and phishing domains while browsing.

A complete overview of their specs and features can be found in our Surfshark review, so feel free to check that out.

Ivacy is one of the best VPNs for DAZN users that are on a budget. With up to 90% savings for their longer subscriptions, you won't need to spend more than you have to just to watch the next season or any big upcoming events.

One neat aspect regarding their service is that you can connect up to ten separate devices to a single account. Pretty useful if you have a lot of gadgets laying around the house and want to quickly switch between them during half-time or quick commercial breaks.

However, being one of the cheaper services on the market means you may have trouble streaming HD content from DAZN. But if you don't care much about video quality, Ivacy is a decent solution that won't break the bank.

See our complete Ivacy review for the full range of services they offer.

Now, if you DO care about seeing all your favorite season highlights or match-ending goals in 4K, then NordVPN should be your first choice. They've placed first in the AV-Test VPN speed tests, and their top-of-the-line NordLynx protocol promises faster speeds than the default OpenVPN.

This makes them a top choice for streaming both live sporting events on DAZN and all your favorite content on Netflix, BBC iPlayer, Hulu, and all the streaming platforms you're used to by now. It can pretty much unblock any service out there, though it only covers around 60 countries, which is a step behind competitors like ExpressVPN and CyberGhost VPN.

Moving on, you can use their CyberSec feature if you want to block pesky ads, as well as keep yourself safe from phishing attempts. When you're not streaming or performing other network-intensive activities, you can use their double VPN feature for an extra dose of privacy online.

As always, be sure to check out our full NordVPN review, where we cover every aspect of their service in great detail.