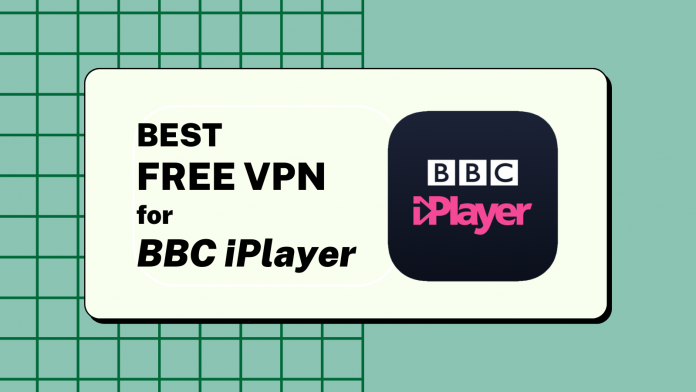 BBC’s iPlayer streaming service offers a treasure trove of content which includes movies, TV shows, live TV channels, and more. Since its launch in 2007, it has managed to become and remain one of the best sources of free content on the Internet. However, it’s not available worldwide, which means you’ll need the best free VPN for BBC iPlayer if you’re not in the UK.

That’s true; BBC iPlayer is available in the United Kingdom only, which is something that won’t change in the future. With that said, you’ll need to learn how to bypass iPlayer’s geo-blocks no matter if you’re a Brit living abroad or simply want to watch free movies from anywhere.

Right off the bat, we’ll say that very few VPNs work with iPlayer. In terms of free VPNs, there’s only one option that lets you escape the streaming service’s “BBC iPlayer only works in the UK – sorry, it’s due to rights issues” error message. And yes, we’ll reveal that option to you.

So, ready to jump right in? Keep reading and discover all about the best free-of-charge VPN services that can still unblock BBC iPlayer from anywhere.

How to Get a Free VPN Trial for BBC iPlayer

You can get a free VPN trial and access BBC iPlayer without restrictions in only a few minutes of your time. To make that happen, do the following:

ExpressVPN gives you fast speeds and unlimited bandwidth. So, you can leave it running in the background at all times, especially if you want to protect your privacy.

The best free VPN for iPlayer must offer servers in the UK (which helps you unblock iPlayer from abroad). Then, it must bring fast-enough speeds and native software for all your devices. It must also bring unlimited bandwidth, but that’s something no free VPNs offer (don’t worry, we’ll recommend alternatives as well).

Based on the requirements mentioned above, we managed to find a small group of VPNs to recommend. So, these are the 3 best free VPNs for BBC iPlayer:

There are many good reasons why ExpressVPN is our #1 recommendation. It’s easy to use, unblocks iPlayer with no issues, offers fast speeds, and brings unlimited bandwidth. In other words, ExpressVPN checks all the right boxes.

As you probably know, you can access iPlayer on the Web, mobile devices, tablets, and media streaming devices. Well, ExpressVPN matches that. In other words, it helps you unblock iPlayer on practically any device, any time you want to stream movies and TV shows. On top of that, it gives you 5 simultaneous connections.

Then, ExpressVPN has 3,000+ servers globally. Many of those are found in the United Kingdom across 4 locations (London, East London, Docklands, and Wembley). All those servers (many of which are 10 Gbps units) work with iPlayer and other UK-based services. Also, if you’re a subscriber to Netflix, Hulu, Disney Plus, HBO Max, and Prime Video (all of which are US-based services) – this VPN helps you unblock those as well.

Let’s not forget that ExpressVPN has a comprehensive customer support system. In case of any issues or questions, you can contact its agents via live chat. However, this VPN is pretty simple to use, so we don’t expect you to encounter any problems. Since there’s no learning curve, even first-time VPN users will handle things just fine.

In the end, we’ll add that ExpressVPN isn’t a free VPN. However, you can take advantage of its 30-day free trial, as you’re covered by this VPN’s money-back guarantees. Therefore, our strong recommendation is to try it out.

If you wish to learn more, here’s our in-depth ExpressVPN review.

We recommend NordVPN if you need a reliable option for both streaming and privacy. This VPN has a rare combination of streaming-friendly features, cyber-security tools, and incredibly fast speeds. On top of that, it has no usage-related limitations.

NordVPN is among the oldest VPNs, which means you’ll find highly evolved features here. For example, it’s available on any device that works with VPNs. So, you’ll get to stream BBC iPlayer for free on your computer, phone, tablet, streaming device, and more. NordVPN also works on routers, giving enough freedom to more advanced users. And then, it gives you 6 simultaneous connections, which seems generous enough.

This VPN offers 5,500+ servers in close to 60 countries. So, even though it has more servers than ExpressVPN, that network is less extensive than what its rival offers. Nonetheless, you’ll get to unblock plenty of streaming services overall. NordVPN is an excellent pick for iPlayer as it offers 440+ servers in the UK. However, it’s equally suitable for US-based streaming services (Netflix, Hulu, Disney Plus, HBO Max, and more).

The only downside is that NordVPN’s streaming servers aren’t labeled. However, you can mitigate that by creating a list of favorite servers. And speaking of NordVPN’s servers, it comes with units specialized for privacy protection. There’s no data logging involved, many of those are 10 Gbps servers, and they run on RAM only (no hard drives are used).

Finally, we’ll note that NordVPN is a premium VPN service. However, you can test-drive it for 30 days, as it comes with a no-questions-asked money-back policy. That said, we highly recommend you try it – as no free VPN matches what NordVPN offers.

As you know, we’re talking about the best free VPNs for BBC iPlayer in this article. However, our previous recommendations come as free trials. That’s because when it comes to unblocking iPlayer outside the UK, only one free VPN does the job – in a limited manner.

Windscribe offers a very capable free tier, letting you unblock streaming services and protect your privacy. Even though it has servers in 60+ countries, its free servers are available in a handful of locations. That said, you’ll gain access to UK-based servers, which can unblock iPlayer without any issues. Still, there are some limitations to keep in mind.

Once you sign up for Windscribe, you’ll get 2 GB of data per month. If you supply your email address, that limit will increase to 10 GB of data. You’re free to spend that allowance any way you see fit, so nothing stops you from accessing iPlayer outside the UK. Of course, streaming requires a lot of data, so you must be cautious and stick to the lowest video resolution.

The only way to remove that limit is by subscribing to Windscribe’s premium tier. Therefore, it’s clear that Windscribe’s free trial is like a trial account. It gives you a taste of what to expect if you pay. However, since no credit card is needed for you to sign up, Windscribe is the only as well as the best 100% free VPN for iPlayer at the moment.

Our Windscribe review will tell you more, focusing on the VPN’s premium tier.

When it comes to free VPNs for BBC iPlayer, your options are limited. That’s why we focused on VPNs that offer a free trial instead, such as ExpressVPN, which is your best option to watch BBC iPlayer from abroad for free.

ExpressVPN works with iPlayer without a hitch, providing you with many UK-based servers that help you unblock practically any website. On top of that, it’s easy to set up and easy to use. Also, it takes care of your privacy the way no other VPN does.

However, you do have other options as well. If you’re willing to spend a couple of dollars per month on a capable VPN for BBC iPlayer, you’ll want to check our guide to the best VPNs for media streaming.

Yes, BBC iPlayer is available free of charge. To access and use that streaming service, you need to sign-up using your email address (no credit card is required).

Is It Legal and Safe to Use a Free VPN to Watch BBC iPlayer?

Yes, it’s legal and safe to use a free VPN to watch BBC iPlayer. You won’t get into trouble, but know that you’ll be technically breaking iPlayer’s Terms of Use.

That’s because iPlayer is available only for those in the UK. So, legally speaking, you’re not allowed to use it from abroad. Still, you won’t face any legal consequences if you decide to do so, as using a VPN is not illegal.

Which Free Trial VPN Is Best for BBC iPlayer?

The best free trial VPN for iPlayer (as per our extensive tests) is ExpressVPN. You can try it for 30 days with no risks whatsoever.

That’s because ExpressVPN offers 30-day money-back guarantees. If you decide not to stick with it (which we believe will hardly happen), you can simply ask ExpressVPN to have your money back (and you’ll get it back within a few business days, no questions asked).

Does ExpressVPN Work with BBC iPlayer?

Yes, ExpressVPN works with BBC iPlayer. In fact, that’s the best VPN for iPlayer available today, quite a few steps in front of its competitors.

Can I Watch BBC iPlayer Abroad for Free with a VPN?

Yes, you can watch BBC iPlayer abroad for free using a VPN – but you need to be careful about which VPN you’ll pick, as very few VPNs work with iPlayer reliably.

Our #1 recommendation is ExpressVPN, which unblocks iPlayer every single time. You try it for 30 days without any risks involved.

Can a Free VPN Unblock BBC iPlayer from Anywhere?

Yes, a free VPN can unblock BBC iPlayer from anywhere. However, practically every free VPN comes with certain limitations you need to keep in mind.

More precisely, free VPNs come with data allowances of up to 10GB per month. Since streaming requires a lot of data, you’ll quickly burn through that allowance. So, you need to exercise caution when using free VPNs.

That’s all for our guide on the best free VPNs for BBC iPlayer. If you have any questions, know that you can contact us via the comments section below. Lastly, thank you for reading!