How to Watch Ghosts Season 4 Online From Anywhere 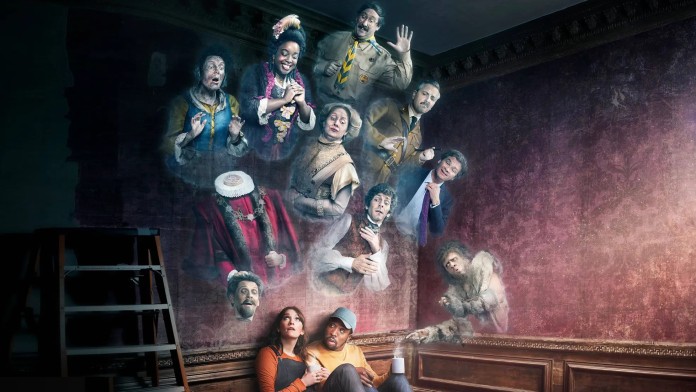 One of the BBC's most beloved and popular comedy shows is returning with a new season, and we can't keep calm! Fans of the show won't have to wait much longer to stream the new episodes online, and we have all the information you might be looking for, including the release date, plot, and cast. So let's check out where, when, and how to watch Ghosts Season 4 online from anywhere in the world.

Ghosts features Alison and Mike, a young couple who suddenly acquire a large rural estate only to discover it is falling apart and is infested with... ghosts. Named Button House, it is home to several restless spirits that have died there over the years, who are doomed to argue with each other forever over the most trivial daily grievances. In season four, we see that the Button House is open for business, but can Alison and Mike make the B&B a success, or will the intruding spirits derail their plans once more? Apart from that, we will also get to know more about the ghosts - how they died and what their lives looked like when they were alive.

Ghosts Season 4 premieres on Friday, September 23, 2022, on BBC One. You can also stream the six-part series on the BBC iPlayer.

How to Watch Ghosts Season 4 Online From Anywhere

You can simply use a streaming service or live TV if you're in your own country to watch your favorite shows. Traveling abroad, however, will prevent you from using your library because of geo-restrictions imposed by licensing agreements. However, if you use a VPN to watch Ghosts Season 4 online, it will disguise your IP address and make it appear as though you are at home.

Do you want more information on VPN services? ExpressVPN can effectively unblock the majority of streaming services, including Netflix, Hulu, Prime Video, and others, thanks to its hundreds of servers throughout the world. Using top-notch encryption techniques, the tool safeguards your security and preserves your online privacy. Additionally, a money-back guarantee is provided, allowing you to try ExpressVPN for 30 days RISK-FREE.

Visit the website and subscribe to ExpressVPN (49% discount and 3 Months FREE) to receive a great offer. After downloading and installing the native software for your system or device, you may log in using an activation code or a sign-in link sent to your email address. To watch Ghosts Season 4, turn on your VPN, pick a server in your own country, and then access a streaming platform.

How to Watch Ghosts Season 4 in the UK for FREE

UK residents are in luck since they can simply watch the show for free on the BBC iPlayer. This streaming service will offer access to the show soon after it airs on BBC One. You can watch Ghosts Season 4 on BBC iPlayer free of cost, and you don't even have to create an account.

Traveling abroad? You can use a trustworthy VPN to watch Ghosts Season 4 on the go. This tool will remove all geo-restrictions you may face; pick a UK server when you turn on the VPN, and then access a platform to watch the show easily.

How to Watch Ghosts Season 4 in the US

You may also see if HBO Max is more suitable for you through subscription services like Apple, Google Play, and Roku. For iOS, Android, smart TVs, and consoles, the streaming service provides native applications. And we should also mention that you can stream content in 4K.

With the help of a good VPN, you can easily watch the title while traveling internationally. When you activate the VPN, just choose a US server, and you're ready to go.

How to Watch Ghosts Season 4 in Canada

Canadians can watch Ghosts Season 4 on CBC Gem, and although this streaming service has a free tier, you can also choose a premium membership for $4.99 a month to receive access to the CBC News Network live stream and ad-free on-demand episodes.

Due to geo-restrictions on most streaming services, you won't be able to watch the show while you're traveling abroad. However, you may bypass any geo-blocks you encounter by using a reliable VPN. When you activate the VPN, select a Canadian server to watch Ghosts Season 4 on the go.

How to Watch Ghosts Season 4 in Australia

We're sad to inform you that only two seasons of Ghosts are available in Australia on Stan, ABC iview, and Britbox - and we're not sure if the latest one will land here anytime soon. Moreover, BBC One and BBC iPlayer are only available in the United Kingdom, so if you still want to watch Ghosts Season 4 in these countries, you can use a reputable VPN to access the BBC iPlayer. For more details, you can check out how to watch BBC iPlayer outside the UK for free.