How to Watch Stuck Online From Anywhere 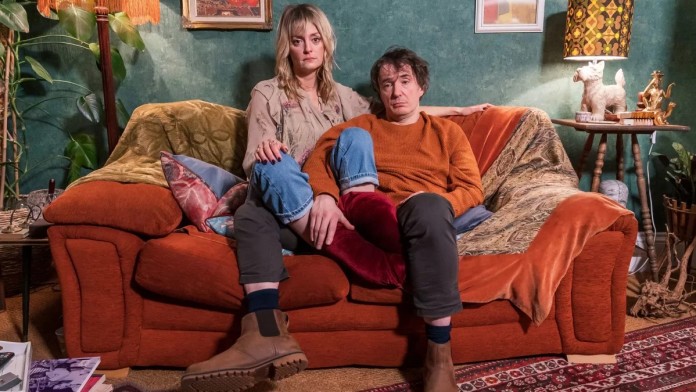 In the mood for a sitcom that's not too lengthy? We've got the perfect recommendation for you, as a BBC series about a couple who are at crossroads is about to premiere soon. We have everything you need to know, so let's check out where, when, and how to watch Stuck online from anywhere.

With 15-minute episodes, Stuck is the story of Dan and Carla, who are facing a difficult situation as Carla muses about whether the two of them being cooped up in a small apartment is all she can hope for in life after Dan was just laid off. Dan has trouble concentrating on looking for job and is instead distracted by the waitress at his neighborhood café. When Carla's ex-girlfriend Maya also enters the scene, the pair is unsure about their future together. Dylan Moran, who plays Dan, said, "Dan and Carla both want certain things out of life, but he’s on a downward trajectory in his career, just at the point when she’s blossoming, becoming more confident and asking for what she needs. He’s trying to catch up with her."

The cast of Stuck includes Dylan Moran, Morgana Robinson, Juliet Cowan, Clemens Schick, and Neil Maskell. Moran also wrote the sitcom, and it is directed by Ian FitzGibbon, and is a Hat Trick Production for the BBC.

Stuck premieres on BBC Two on Thursday, September 8, 2022, with 2 episodes streaming simultaneously. You'll also be able to watch the 5-episode series on the BBC iPlayer.

How to Watch Stuck Online From Anywhere

You may simply watch the show online if you are in your own country and have access to the BBC iPlayer. However, if you're traveling outside of the country, geo-restrictions may make it difficult for you to access your streaming library. You can use a VPN to watch Stuck online, as it will help you remove geo-blocks and make you appear to be back home.

We recommend utilizing ExpressVPN since it can unblock most streaming services like Netflix, Hulu, etc., and has hundreds of servers spread all over the world. You can try ExpressVPN for 30 days RISK-FREE thanks to a money-back guarantee that is also provided. You are shielded from security issues, and strong encryption techniques keep your online privacy safe. This VPN is simple to use, and it works with many different devices, including PCs, routers, tablets, smartphones, and more.

Visit its website and subscribe to ExpressVPN (49% Discount + 3 Months FREE). After downloading the native application for your system or device, you may log in using an activation code or a sign-in link sent to your email address. Choose a server in your home country when you activate the VPN, then go to a streaming service to watch Stuck online from anywhere.

How to Watch Stuck in the UK for FREE

Folks in the UK can easily watch the show on the BBC iPlayer for free. The title will be accessible on this streaming platform soon following its BBC Two broadcast. You can watch Stuck on BBC iPlayer without paying anything, and you don't even have to create an account.

Some other BBC titles that you can watch on this platform include All That Glitters, Lion: The Rise and Fall of the Marsh Pride, The Hotel People, Red Rose, My Life As A Rolling Stone, Freddie Flintoff's Field of Dreams, The Hundred, Peaky Blinders, etc.

The majority of streaming services have geo-restrictions, so if you're traveling to another country, you won't be able to see the show. However, if you make use of a reliable VPN, you might be able to get around any geo-blocks you encounter. After activating the VPN, select a UK server to stream Stuck while you're on the move.

How to Watch Stuck in the US, Canada, and Australia

A US or international release date for the title has not been announced yet. Moreover, the BBC Two and BBC iPlayer are available only in the UK, but if you still want to watch Stuck in the US, Canada, or Australia, your best bet is to use a trustworthy VPN to access the BBC iPlayer. For more details, you can check out how to watch BBC iPlayer outside the UK for free.