How to Watch Bloodlands Season 2 Online From Anywhere 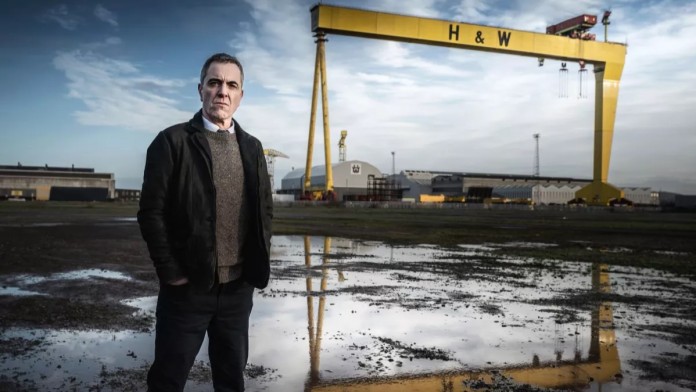 After the immensely popular first season which garnered 8.2 million viewers, Bloodlands is back with another installment, set in Northern Ireland. We are excited to stream the new episodes of the crime thriller, and we're sure fans are eagerly waiting for the new series to drop. We have everything you need to know, so keep reading to find out where, when, and how to watch Bloodlands Season 2 online from anywhere.

In Bloodlands Season 2, we'll see that the death of a shady accountant will force DCI Tom Brannick to wonder exactly how far he'll go to maintain his reputation. Brannick and the accountant's widow, Olivia Foyle, must keep each other perilously close as the murder reveals a greedy trail that threatens to reveal his identity as famous assassin, Goliath. Tom and Olivia enlist the help of Tom's fellow officers DS Niamh McGovern, DCS Jackie Twomey, and DC "Birdy" Bird, and Tom's daughter, Izzy, as they work to unravel the riddle her husband left behind.

Bloodlands Season 2 will premiere on BBC One on Sunday, September 18, 2022, and you can also stream the show on the BBC iPlayer.

How to Watch Bloodlands Season 2 Online From Anywhere

You may easily watch the show online if you are in your native country and have access to BBC iPlayer. Geo-restrictions may make it difficult for you to access your streaming library if you travel internationally. Watch Bloodlands Season 2 online with a VPN since it will eliminate geo-restrictions and make it seem like you are back home.

Looking for a VPN solution that works for you?  Try ExpressVPN, which has hundreds of servers globally and can unblock the majority of streaming services. It also offers dependable and quick connections. With the finest encryption standards available, it safeguards your data and privacy online. You can try ExpressVPN for 30 days RISK-FREE because of its no-questions-asked money-back guarantee.

If you go to its website and subscribe to ExpressVPN (49% Discount + 3 Months FREE), you can save a ton of money. You can sign in using an activation code or a sign-in link supplied to your email address after installing the native program for your system or device. When the VPN is activated, select a server in your country of residence, then access a streaming provider to watch Bloodlands Season 2 online from any location.

How to Watch Bloodlands Season 2 in the UK for FREE

For those living in the UK, the BBC iPlayer is the best place to watch the show. The title will be available on this streaming service shortly after it premieres on BBC One. BBC iPlayer offers Bloodlands Season 2 for free, and you don't even need an account to watch it.

Meanwhile, you can also check out other BBC titles on the platform, such as Stuck, Ladhood, All That Glitters, Lion: The Rise and Fall of the Marsh Pride, The Hotel People, Red Rose, My Life As A Rolling Stone, etc.

By utilizing a good VPN, you may circumvent geo-restrictions when traveling overseas and watch the program on the move. Simply choose a UK server when you activate the tool to access the BBC iPlayer.

How to Watch Bloodlands Season 2 in the US and Canada

A release date has not yet been announced in the US or Canada, but we would like to let you know that the first season is available on Acorn TV ($6.99/CA $8.99 monthly after a 7-day free trial). Alternatively, you can add Acorn TV to Amazon Prime Video for $6.99/CA $8.99 per month on top of the Prime subscription fee.

If you're visiting another country, you may watch Bloodlands on the move by disabling geo-restrictions with a reliable VPN. All you have to do to access the streaming site is activate the VPN and select a server from your home country.

How to Watch Bloodlands Season 2 in Australia

Season 1 of Bloodlands is available on SBS On Demand, so we're hoping that the second installment will land here soon.

Having a capable VPN will enable you to watch Bloodlands when you're traveling abroad. When you turn on the VPN, select an Australian server, and you're good to go.