How to Watch Escape From Kabul Airport Online From Anywhere 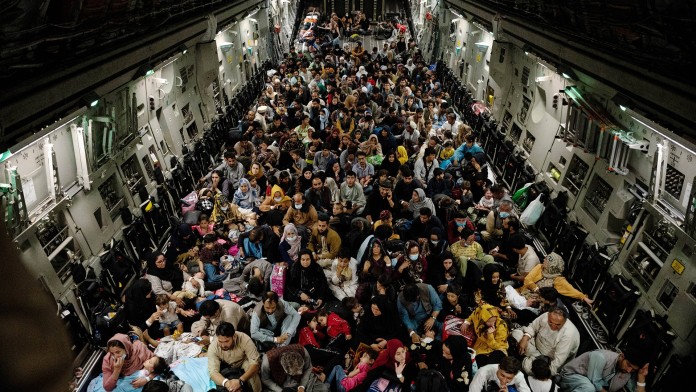 An original documentary, Escape From Kabul Airport, chronicles the 18 historic days in August 2021 when the US withdrew its forces from Afghanistan and evacuated thousands of Afghan residents from Kabul Airport after the Taliban took control of the city. Despite the confusion and misery, it was the biggest airlift in US history, and it managed to save 124,000 lives. Here's where, when, and how to watch Escape From Kabul Airport online from anywhere.

A small contingent of US Marines was sent to Kabul on August 13 with the goal of evacuating American citizens and Afghans who had collaborated with the Americans and Allied Troops, after 20 years of fighting between the Taliban and NATO forces. Plans for the orderly departure changed when the Taliban suddenly seized control of the city two days after the Marines arrived, delaying its implementation past the mutually agreed-upon date of August 31. Thousands of Afghan men, women, and children hurried to the airport in search of an escape route because of fear of retaliation and Taliban crackdowns on human rights. As the people grew more anxious to leave, a heartbreaking series of events occurred, including a suicide bombing that the Islamic State group claimed responsibility for and which left 13 US military personnel and more than 170 Afghan civilians dead.

We will be able to watch never-before-seen archival videos from the scene along with interviews with Taliban combatants, US Marines, eyewitnesses, and refugees. The documentary will also feature the plight of fleeing Afghan civilians who describe their harrowing journey to the airport as their final chance to leave the nation before the Taliban seized power.

Escape From Kabul Airport premieres on BBC Two on September 21, 2022, and you can also stream it on the BBC iPlayer.

How to Watch Escape From Kabul Airport Online From Anywhere

If you are in your home country and have access to the BBC iPlayer, watching the show online is pretty uncomplicated. However, geo-restrictions can make it challenging for you to access your streaming library when you're out of the country. Don't worry, we have a quick solution to this problem: Use a VPN to watch Escape From Kabul Airport online, as this tool removes geo-blocks and makes you appear to be back home.

Are you trying to find a VPN option that works for you? We suggest using ExpressVPN since it has hundreds of servers throughout the globe and can unblock the majority of streaming services like Netflix, Hulu, etc. Additionally, a money-back guarantee is provided, allowing you to try ExpressVPN for 30 days RISK-FREE. Your online privacy is also safe because strong encryption techniques guard you against security issues.

To get a fantastic deal, go to its website and subscribe to ExpressVPN (49% Discount + 3 Months FREE). You can sign in using an activation code or a sign-in link supplied to your email address after installing the native app for your system or device. Activate the VPN, select a server from your home country, then navigate to a streaming website to watch Escape From Kabul Airport.

Good news for UK citizens: You can easily watch the show for free on the BBC iPlayer. Shortly after it airs on BBC One, the documentary will be accessible on this streaming platform. You don't even need to make an account to watch Escape From Kabul Airport, which is free to stream on BBC iPlayer.

We recommend checking out these other BBC titles on the platform - Crossfire, Mastermind, Northern Justice, Bloodlands, Frozen Planet II, Stuck, Ladhood, My Life As A Rolling Stone, etc.

You won't be able to watch the show if you travel to another country because most streaming services have geo-restrictions. You might be able to circumvent any geo-blocks you come across, though, provided you use a reputable VPN. When the VPN is activated, choose a UK server to watch Escape From Kabul Airport while you're on the move.

How to Watch Escape From Kabul Airport in the US

Since Amos produced Escape From Kabul Airport for the BBC, in partnership with HBO, and in collaboration with ARTE France, you can watch it on HBO if you're in the US. Escape From Kabul is an HBO Original documentary, and you can stream it on HBO Max on September 21 at 9 pm ET. You can choose from the 2 plans the platform offers - an ad-supported tier for $9.99 per month or $99.99 per year and an ad-free tier for $14.99 per month or $149.99 per year.

You may also see if HBO Max is more suitable for you through subscription services like Apple, Google Play, and Roku. For iOS, Android, smart TVs, and consoles, the streaming service provides native applications. And we should also mention that you can stream content in 4K.

DirecTV Stream also offers HBO Max as a Premium add-on network, so you can easily watch Escape From Kabul Airport on this platform. The add-on costs $14.99 per month, and plans for DirecTV Stream start at $54.99 monthly for 2 months and $69.99 per month after that.

With the use of a reliable VPN, you can easily watch Escape From Kabul while visiting another country. When you activate the VPN, simply choose a US server, and you're ready to go.

How to Watch Escape From Kabul Airport in Canada

Canadians may be able to watch Escape From Kabul Airport on Crave, as it offers HBO Max and HBO, along with Starz and Showtime. A subscription to this service will cost you $19.99 per month, and new customers also get a 7-day free trial.

With the help of a dedicated VPN, you can easily watch the title while traveling internationally. When you activate the VPN, just choose a Canadian server, and you're ready to go.

How to Watch Escape From Kabul Airport in Australia

We were unable to locate any streaming alternatives in Australia where you may watch the title - sorry! Moreover, BBC One and BBC iPlayer are only available in the United Kingdom, so if you still want to watch Escape From Kabul Airport in these countries, you can use a trustworthy VPN to access the BBC iPlayer. For more details, you can check out how to watch BBC iPlayer outside the UK for free.