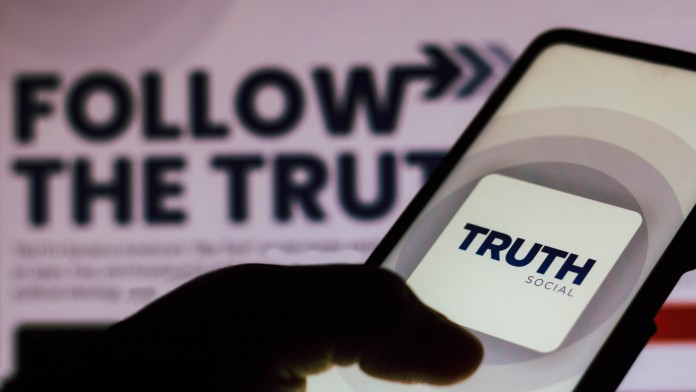 After he was banned from Facebook and Twitter, former US President Donald Trump decided to launch "Truth Social" - a social media platform meant to "encourage [...] conversation without discriminating against political ideology." The service was previously iOS-exclusive, although it has since launched a browser version (as of May 2022). While this allows for a wider audience, Truth Social is still restricted to the United States, meaning you'll need a VPN to access it from abroad.

How so? Well, using a VPN lets you obtain a US IP address and use the site as if you were located in the United States. Existing users from the US and Canada may also use a VPN to access the platform while traveling outside the country.

Furthermore, a VPN will help protect your data by encrypting it, making it next to impossible to read by greedy Internet providers, hackers, and other bad actors. What you do online should be strictly your business.

Now, trying to use Truth Social without a VPN leads to the following message:

You can easily bypass such geo-blocks with one of our recommended Truth Social VPN providers. However, keep in mind that you'll need to provide a phone number for SMS confirmation.

How to Unblock Truth Social with a VPN

Unblocking Trump Media's new social platform is a fairly quick process. Here's what you need to do:

At the time of writing this article (June 2022), registration for Canadian residents seems to be closed (although you can still access the main website as normal). In the meantime, you can use a US VPN server to register.

The best VPN for Truth Social should provide fast and secure servers in the United States, strong encryption to protect your data and a kill switch that prevents your real IP (and thus your physical location) from leaking online. Having compatible, easy-to-use apps for iOS, Mac, Windows, and Linux is also a must. Truth Social is unavailable on Android for the time being.

Based on these criteria and our own testing, we believe these are the 5 best VPNs for Truth Social at the moment:

One of the most prominent VPN providers on the market, ExpressVPN's powerful network spans 94 countries (yes, including the good old US). And with its independently audited no logs policy, you don't need to worry about anyone logging what you do online. Its TrustedServer technology also ensures that your data will never be exposed as part of a government seizure, rogue employee attack, or similar threats to your privacy.

ExpressVPN works on many devices - if it can access the Internet, it can probably run ExpressVPN. And if it can't, then you can always install ExpressVPN on a compatible VPN router. Not only will this secure your entire household, but each of your gadgets will gain all the benefits that come with using a VPN.

All ExpressVPN apps come with a built-in kill switch that turns off the network connection on your device in case of a random disconnect. That way, your true location won't leak online. While we haven't seen reports of people getting banned from Truth Social for bypassing geo-blocks with a VPN, it's better to play it safe.

Speaking of which, ExpressVPN's all-new Threat Manager lets you block online trackers so ad companies can't create detailed profiles about you. We've covered all these features in more depth in our ExpressVPN review, so go check that out.

NordVPN is a Panama-based provider, a region known for its strong privacy protections. Their no logs policy has been successfully audited twice so far, so rest assured that your data isn't stored anywhere on their network. On top of that, the provider boasts RAM-based servers that automatically wipe any in-transit data upon reset - the best "plan B" against government seizures and the like.

Naturally, the apps come with a kill switch to prevent accidental IP leaks. And if you require extra privacy while using Truth Social, NordVPN's multi-hop VPN option will route your data through multiple servers and add an extra encryption layer on top of the existing one. Keep in mind that this will put a serious dent in your network speeds, but thankfully NordVPN is among the fastest providers out there.

The service also goes beyond VPN functionality with the help of Threat Protection. It blocks intrusive ads, stops tracking, and even scans files for dangerous malware before downloading. There's even built-in anti-phishing protection (great for Truth Social, Facebook, Twitter, and other places rife with phishing scams).

Please read up on these features and the provider's specs in our NordVPN review.

Share the joy of a VPN with your family and friends, as Surfshark lets you connect an unlimited number of devices to a single account. And yes, Surfshark also includes all the industry-standard security features we've mentioned previously: powerful encryption (with Wireguard support for extra performance), a strict no-logs policy, double VPN, and private DNS.

If you need to use Truth Social from a more restrictive country, Camouflage Mode lets you hide your VPN activity. Essentially, all your traffic will look like regular HTTPS traffic, the kind you already use on a daily basis while browsing secure websites.

To keep you safe from phishing activity, tracking, and potentially dangerous ads, Surfshark has added CleanWeb to its usual offering. This move is highly welcome, considering how much cybercrime has skyrocketed these past few years.

Want to learn more about the provider? Then make sure to check out our Surfshark review for the full scoop.

As a Colorado-based provider, PIA's massive network is mostly focused around North America, making it an excellent VPN for unblocking Truth Social and other content based in the region. Their no logs policy has been proven effective twice - and in a court of law, no less. You can't get a better guarantee for the privacy of your data than that.

As always, you get all the security bells and whistles that come with a top-notch Truth Social VPN: Military-grade encryption (Wireguard support and plenty of customization options included), a kill switch, and even PIA MACE - which works much like the previously mentioned threat blockers.

It is an all-around solid choice for Truth Social and other social platforms. Although, if you're looking to stream geo-blocked content as well, then we recommend one of the other options on our list. See more in our PIA review.

CyberGhost VPN remains committed to protecting its users' privacy. To that end, it has started releasing quarterly transparency reports detailing all the information requests they've received. Needless to say, its strict no-logs policy holds up without a hitch.

The in-app kill switch can't be disabled, so there's no risk of forgetting to turn it on when going online. No need to worry about any IP-based security triggers going off, whether they decide to implement one on Truth Social - or when you decide to do some home banking, trade crypto, and other sensitive transactions.

On top of the usual security measures listed thus far, CyberGhost VPN also has a built-in threat blocker. And if you don't mind the extra cost (less than $1 per month), you can gain access to faster "NoSpy" servers - self-operated by the provider at their headquarters in Romania. No dealing with third-party data centers, meaning fewer chances of a breach, rogue employee attack, and similar scenarios.

Check out our CyberGhost VPN review for anything else we haven't covered here.

While each provider has its own spin on the VPN formula, you're guaranteed to unblock and have a secure experience on Truth Social, no matter your choice. Every option includes powerful US server networks, but if you're looking to unblock more content (such as international Netflix libraries), then ExpressVPN and its extensive, 94-country network should be your first pick.

Have trouble accessing Truth Social with a VPN or other issues with the platform? Let us know in the comments, and we'll do our best to help.